They'd stuff into a complementary Subaru Outback Malone received from a local endorsement deal. A group text the night before would determine their departure time. Sometimes Malone treated his assistants to Voodoo Doughnuts. The coaches often analyzed their kids' own games, ditching NBA-level, schematic banter to share proud-parent anecdotes. Conversation naturally lulled following crushing defeats, especially when Malone manned the wheel. The driver controlled the radio. "After a win," Bowen says, "we might rock some tunes."

Bowen always tracked their status on Waze. He'd make the call on whether to continue cruising down Sante Fe Drive or merge onto I-25 South for the final stretch to Denver's downtown. Malone typically rolled film on his laptop. One morning, Denver's head coach perked up from his computer as Nori pulled into the parking lot of an Einstein Bros. Bagels, wondering if they were stopping for a quick bite.

Nori shook his head, signaling into their rearview mirror. "We got a motorcycle cop hawking us," he confessed. Denver's coaches got slapped with a speeding ticket. "If we got pulled over today," Nori says, "that guy probably would have turned it into a police escort."

Malone's Nuggets have, of course, bloomed into a juggernaut. On Tuesday, they'll face the Los Angeles Clippers in Game 7 of the Western Conference semifinals, overcoming a 19-point deficit in the third quarter of Game 6 to reach the decisive seventh matchup. It marks the second straight series Denver has battled back from a 3-1 deficit this NBA postseason. It has won five consecutive elimination games, three of which—including that Game 6 victory over L.A.—came after trailing by at least 15 in the second half. 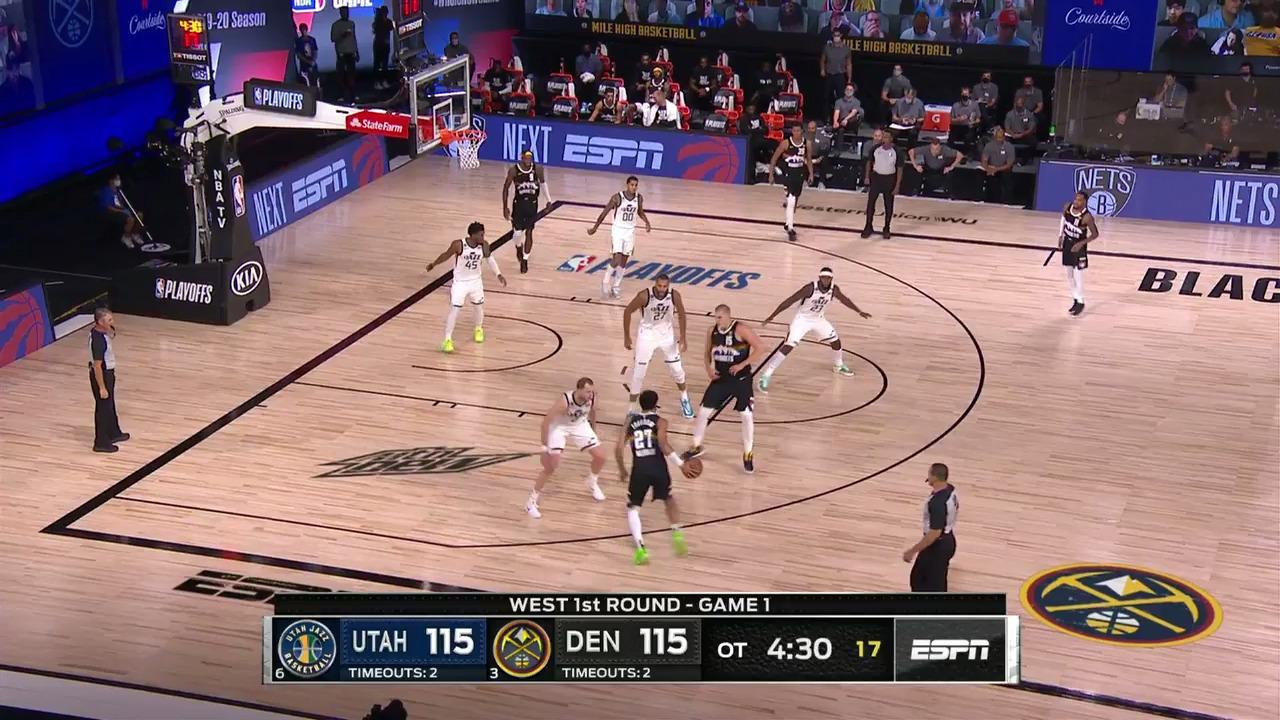 That all requires an ineffable connectivity few modern NBA teams can rival. If the Clippers represent the fruits of this current NBA empowerment era, erecting an overnight championship favorite by landing both Paul George and Kawhi Leonard in July 2019, the Nuggets stand as a worthy antithesis. Denver's 12 returning players at the onset of 2019-20 paced the entire NBA. Nuggets officials believe that continuity stood paramount in the franchise's steadily improving win total each of the past four years—before the coronavirus curtailed this regular season.

Los Angeles' superstar wings still seem to be ironing out their crunch-time attack. Denver's bread-and-butter offense has been baking since 2016. While Los Angeles shot just 10-of-38 over the final two quarters of Game 6, Nikola Jokic and Jamal Murray helped Denver outscore them 64-35. Malone's staff has steadily developed that critical tandem for half a decade. The Nuggets have only changed course with small tweaks here and there, when the franchise's overall navigation depended on it. "We're lucky," says Nuggets president Tim Connelly. "We actually really enjoy each other."

The night of July 6, 2019, marked nothing short of a coup for the Clippers. Los Angeles teaming up George and Leonard, with the remnants of a plucky No. 8 seed, shook the NBA landscape as declaratively as a 7.1 magnitude earthquake rumbled California earlier that evening.

"Change is what everyone wants," Tim Connelly says. "Let's be honest, we're not getting the same meetings New York's getting or L.A.'s getting. So how can we combat that? How can we try to chart our own course, something we can control a bit more?" Connelly's front office never drafted higher than No. 7 but still netted franchise linchpins in Murray (No. 7) and Jokic (No. 41), plus rotation fulcrums like Gary Harris (No. 19), Michael Porter Jr. (No. 14) and Monte Morris (No. 51).

Among the many moves to bolster that core, Denver scooped Will Barton from Portland at the 2015 trade deadline, whom Connelly's brother Dan trained during college. And while Barton has been injured throughout these playoffs, he morphed from a bench scorer to an integral starter on Connelly's Nuggets this regular season. "He's seen the vision I had, the dreams I had and the aspirations I had for myself, and he just wanted to push me and help me get there," Barton says.

Connelly first met Jerami Grant when the Nuggets forward was a four-year-old toddler, following his dad, 11-year pro Harvey Grant, around the Wizards' facilities during the 1997-98 season, when the executive was just beginning as an intern in Washington's basketball operations. And before the bubble, Jokic's older, equally massive brothers were never too far behind Denver's All-Star center.

"It's genuine," adds Bowen. "I think the guys really care about one another."

Connelly himself is one of seven children. His two sisters heard endless tales of backyard basketball brutality while all nine Connellys convened at the dinner table. The boys shared bedrooms and advice as often. They fought over prizes buried within cereal boxes. "There's a communal mentality that happens when you're in a gigantic Irish Catholic family," says Pat Connelly, Tim's younger brother and a longtime NBA executive.

Along winter road trips, the entire roster ventured to bowling outings and organized teamwide pingpong competitions—Murray swears no teammate can touch his backhand. Malone regularly swaps a standard practice for days of reprieve, stashing the orange leather in favor of a game of soccer or handball atop the Nuggets' practice court. In July, to end Denver's early practices inside the bubble, coaches and players scampered across Disney ballrooms playing full-court games of tag.

All this charm rings hollow, of course, without results and buy-in. The Nuggets long flirted with the Western Conference No. 2 seed, but suspect defense and shooting woes plagued them in early spring before the shutdown. When Connelly traded Malik Beasley and Juancho Hernangomez (two more talented first-rounders drafted outside the lottery), the Nuggets tumbled, going 5-5 before the league shut down in March.

When Denver fell behind 3-1 against Utah, the young core seemed incapable of a deep postseason run. The Nuggets allowed 131.1 points per 100 possessions over their first four opening-round games.

Then Malone's Nuggets silenced the Jazz, holding Utah to just 105.4 points per 100 possessions over the final three games. And now digging out of another 3-1 hole, the Nuggets have largely stalled the Clippers thanks to a 109.5 defensive efficiency throughout these six games against Los Angeles—which would have ranked 14th in the league this year.

"We rally around each other," Malone told reporters following Game 6's comeback.

And yet, Jamal Murray's Denver career first sputtered before it ever began. He clanked his first 16 shots as a professional, capped by a disastrous 0-of-8 performance in his fourth game. His worried college coach John Calipari phoned later that evening. At Kentucky, Murray appeared tailor-made for the current NBA game: a lights-out shooter with playmaking ability as a pick-and-roll ball-handler. He was billed as a seamless fit within modern offenses, a weapon to either space the floor or run the show as a lead guard. "He can do both," Calipari says. "Those are the max guys."

Murray is now more than ready for that payday, forming a deadly pick-and-roll odd couple with Nikola Jokic. The center's own Denver stint began under concerning circumstances. Jokic and his brothers hiked Colorado's Manitou Incline, an arduous trail that gains over 2,000 feet of elevation in less than one mile. On their descent, they tried circumventing the path in search of a shortcut to the bottom. "We got lost and we didn't have water," Jokic says.

They found more commonality with table tennis. Murray's eyes twinkle when discussing the intricacies of pingpong. His face brightens like when Denver's humming ball movement finds him wide open for a three-pointer on the wing. Few Nuggets teammates can withstand his full arsenal with a paddle. He has found a worthy adversary in the towering Serbian he calls "Joker." As Connelly can appreciate, Jokic naturally honed his pong talents against his brothers, in between other bouts of strategic board games and a Serbian version of Monopoly.

The Nuggets duo has now spent countless hours together dissecting footage of their high-screen duet. A second here can free Murray for a step-back triple there. One glance to the corner can freeze defenses long enough to pave wide-open looks for the All-Star big at the top of the key. They've collaborated to burn the Clippers possession after possession, while Paul George and Kawhi Leonard, they of only 49 games together, sputtered down the stretch of Games 5 and 6. "We know each other," Jokic says.

Denver's family has zigged while the rest of the NBA has zagged. Connelly's front office has doubled-down. Amid postseason pressures, they play with joy. When a rookie like Porter makes headlines suggesting he should touch the ball more during late-game offense, it spurs his game-sealing dagger rather than sparking an in-house fiasco. And when the Nuggets' backs have been against the wall in the bubble, they have fought—together—and lived to die another day.

Stats via NBA.com unless otherwise noted.