For most of his career, the knock on the ultra-productive Devin Booker has been: "Does he help you win?"

His buzzer-beating, game-winning jumper over the outstretched arms of both Kawhi Leonard and Paul George on Tuesday was further evidence that the answer to that question is a resounding "yes."

Following their 117-115 win over the Los Angeles Clippers, the Phoenix Suns' chances of making the playoffs went from 1 percent to 2 percent, according to FiveThirtyEight's projection for the constantly changing race for the Western Conference's No. 8 seed.

Regardless of whether they overcome those seemingly overwhelming odds, the Suns' performance during their first three seeding games is a good reminder of the potential that Booker and his teammates have.

After dropping 35 on the Clippers, who are widely seen as title contenders in Orlando, Florida, Booker is averaging 30.7 points since play resumed in July.

His season-long averages of 26.3 points, 6.5 assists and 4.2 rebounds have only been matched or exceeded by players in an age-23 (or younger) season seven times. And if you sort that bunch by true shooting percentage, Booker leads the way.

Individual numbers have never been the problem for the Kentucky product, though. His team's record has. 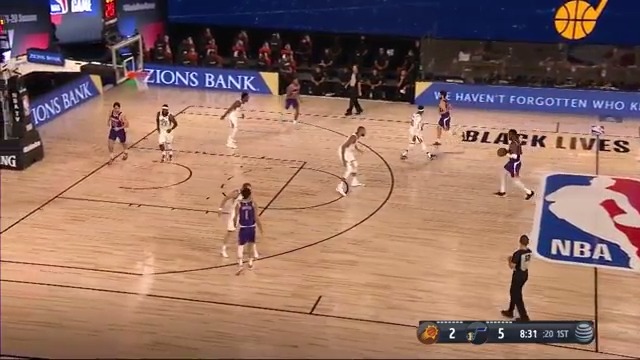 Following Tuesday's win, Phoenix is up to a .293 winning percentage over the course of his career. That's the worst mark in the league over that span.

However, that should be seen more as evidence of organizational issues than Booker's shortcomings.

Now that the front office has started to surround him with intriguing talent, it feels like Phoenix will soon end its playoff drought. The typical "West is brutal" caveat applies, but Booker, Deandre Ayton and a handful of promising wings figure to impact the playoff landscape for the foreseeable future.

This season, when Booker and Ayton share the floor with steady veteran point guard Ricky Rubio, the Suns are plus-7.6 points per 100 possessions (91st percentile).

If the Suns bolster their supporting cast beyond Mikal Bridges, Kelly Oubre Jr. and Cameron Johnson, and Ayton avoids another suspension in 2020-21, that number suggests they will firmly be in the hunt for a playoff spot.

If they are, these formative seasons for Booker could pay off. He's been in a refiner's fire for almost the entirety of his five-year career, which has helped him work some rough spots off an already smooth game.

The calmness with which he took the game-winner (wait for the final slow-motion angle in the highlight below) was present throughout his eight-point fourth quarter:

He went 4-of-6 from the field in that frame. Three of the makes, including his last, were contested fadeaways. Regardless of the defensive pressure, his shooting mechanics remain consistent.

His teammates don't need to be quite as unflappable. He just needs more help than he's had to this point in his career. And regardless of when the Suns' 2019-20 season ends, help appears to be on the way.

The most encouraging sign is the recent play of Ayton, who has the unfortunate distinction of being the No. 1 pick in a draft that included Luka Doncic and Trae Young. Under different circumstances, his rise would almost certainly garner more attention.

Ayton is only the eighth player in NBA history to average at least 20 points, 12 rebounds and two assists per 75 possessions in an age-21 (or younger) season. And his defensive awareness is coming along at a much faster pace than expected.

In his second season, Ayton is already more reliable in rotations, less prone to lapses and more disciplined in the paint. And his development is showing up in the numbers. Phoenix is allowing 3.7 fewer points per 100 possessions with Ayton on the floor compared to when he's on the bench.

Rubio is under contract for next season, too. That's huge for both Booker and Phoenix alike. The Suns are minus-9.9 points per 100 possessions when Booker plays without Rubio, compared to plus-6.6 when they're together.

With Rubio's steady hand at the wheel, Booker is able to operate off the ball more often, giving him valuable opportunities to catch and shoot or attack disadvantaged defenses.

Bridges, Oubre and Johnson are strong complements to Booker, Ayton and Rubio. All three can shoot, and Bridges and Oubre are reliable multipositional defenders. Johnson has further to go on that end, but he's big, and that counts for a lot in defensive schemes.

With Oubre still recovering from a meniscus injury, Booker, Ayton, Rubio, Johnson and Bridges would likely make up a majority of the playoff rotation if the Suns pull off a miracle in Orlando. And even if they don't, that whole group should be back in 2020-21.

They've shown us enough, especially in Booker's case, to think their future is as bright as their moniker.