The more things change, the more they stay the same.

The Los Angeles Lakers had the best record in the Western Conference when the 2019-20 season was suspended March 11 because of the COVID-19 pandemic. They tightened their grip on the No. 1 seed with a 103-101 victory in Thursday's game against the Los Angeles Clippers at Walt Disney World Resort.

It was the first of eight seeding games for the two L.A. teams, and the Lakers have nearly clinched the top spot with a 6.5-game lead following this victory.

Anthony Davis led the way for the victors, picking up the slack when LeBron James struggled from the field even though the King followed his own miss and put in the winning basket with 12.8 seconds remaining. James also played stifling defense on Paul George, forcing a missed three at the buzzer on the ensuing possession.

The ending of the Clippers-Lakers was wild 🤯 https://t.co/GNrYA3gLwT 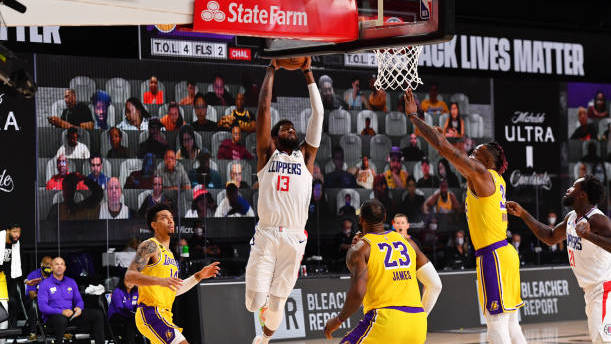 Anthony Davis Too Much for Clippers' Frontcourt

The Clippers felt the absence of Montrezl Harrell in Thursday's contest.

Without Harrell, they were forced to send 35-year-old Joakim Noah and an overmatched duo of Ivica Zubac and Patrick Patterson out to defend Davis, which, predictably, did not go well.

The seven-time All-Star was physical inside and consistently got to the free-throw line throughout the game. Eight of those free throws came in the first quarter alone as he set the tone for what would be a dominant performance.

anthony davis is somewhere after Human and slightly before Super Hero

Anthony Davis is absurd. Doing absolutely everything out there

When there was too much traffic inside and the defense collapsed on LeBron, he took his game to the outside. He also caught fire to end the third quarter with Leonard, James and George on the bench, scoring 10 points in the final three minutes and cutting a seven-point deficit to a one-point hole before the fourth.

That stretch that included back-to-back triples helped swing the game after the Lakers fell behind by double digits in the third quarter.

The performance was also much-needed because James flat-out struggled with his shot against the swarming defense of Leonard and others, leaving much of the Lakers offense in the big man's hands.

That wasn't a problem Thursday.

Hardly anything has gone according to script in this unusual season that will end with a fanless arena at Walt Disney World hosting the NBA Finals.

One thing that has gone as expected is Leonard still looking like a machine.

The two-way superstar who led the Toronto Raptors to a championship last season flashed his versatile skill set by taking James to the hole in the early going, breaking down the defense off the dribble until he found his spot from mid-range and hitting from the outside when opportunities presented themselves.

BRON CLEARED FOR TAKEOFF IN THE BUBBLE 😤 https://t.co/bhIgI7zUin

Yet it is his defense that seemingly always stands out the most.

While James locked up Leonard and George in key spots, he spent large stretches standing in the corner defensively while his teammates guarded Leonard. By contrast, Leonard rarely hesitated to pick up the King. He cut off his driving lanes, swarmed his outside shots and even darted into his passing lanes after James dished out five assists in the opening quarter.

Nobody is going to completely stop LeBron for an entire game, but Leonard's ability to force bad shots and turnovers is a major reason the Lakers scored a single point in the first five minutes of the third quarter.

PG13 a problem! always been

Between Leonard's two-way showing on the way to a plus-minus mark of plus-16 in a loss and George's effortlessly smooth shooting, it was clear the Clippers' stars can handle the pressure of facing the Lakers. If that continues when Harrell and Lou Williams return, it isn't difficult to envision the Clippers winning a potential Los Angeles playoff battle.

Both teams play Saturday. The Lakers face the Toronto Raptors, and the Clippers take on the New Orleans Pelicans.