Namely, Brooklyn Nets superstar Kevin Durant, who Ingram has been compared to physically given his 6'7", 190-pound frame:

Ingram hasn't always compared favorably to Durant beyond that, but his offensive game has continued to grow—to the point that the 2016 No. 2 overall draft pick came into Thursday averaging a career-high 24.3 points per game. And at the time of publication, the 22-year-old had 15 points by halftime against the Jazz, shooting 6-of-11 from the field and 2-of-4 from deep.

If Ingram continues to shoot well from the perimeter—he's at 38.7 percent from the season—he'll be borderline impossible to guard with the ability to score at all three levels. Which would be awfully similar to the dilemma that defenses face against Durant. 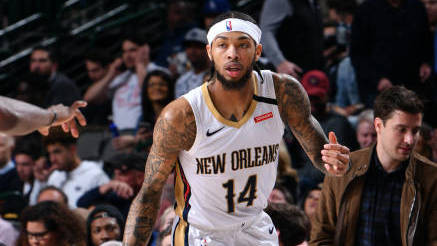