The former, newly crowned La Liga champions, put together an astonishing 10-game win streak to lift the trophy with a game to spare, have a deep crop of talented young players and a manager with a clear plan of how to utilise them.

The latter...well, captain Lionel Messi has described the team's performances as "erratic and weak," the average age of the squad is a concern, the playing style is confused and the fans are seething.

How has it come to this, given Barca were crowned European champions as recently as 2015, with Messi, Neymar and Luis Suarez representing football's golden trident at the time? Since then, Real Madrid have won four UEFA Champions League titles and have just dethroned their rivals in La Liga.

A look into their transfer business since the summer of 2015 paints a picture. We took every deal from that moment to now and formed a top 10, judging by the price paid vs. what each club has got from the player, but also, crucially, leaving room for some projection too—particularly in the more recent deals. 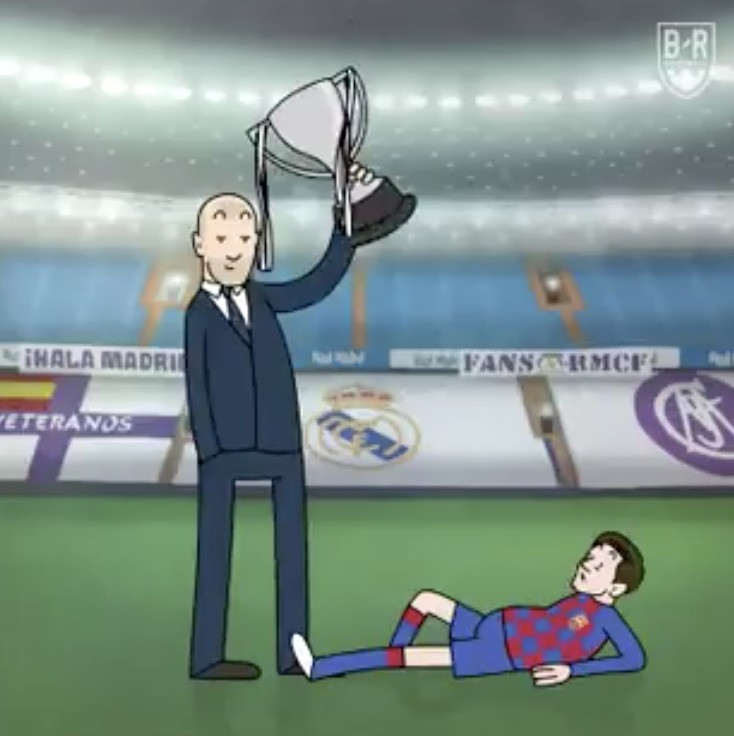 If you're thinking a player who cost €38 million and never topped 20 La Liga starts for Real Madrid is a weak place to begin this list, you're probably right. But the truth is, both clubs (and in particular Barcelona) have wasted serious money over the past five years.

A glance down the transfer lists flags about 12 decent deals, and Kovacic just about beats out the solid, steady but mostly unspectacular Clement Lenglet for 10th.

Kovacic didn't play as much as he'd have liked to, but his issue at Madrid was that he was competing with Toni Kroos and Luka Modric for a place in the starting XI. He would often be rolled out with the "B" squad for La Liga games when the Champions League took focus; he also played the odd European tie and acquitted himself perfectly fine.

Without wishing to dampen the spirit of football for a moment, Arthur could qualify as one of the best deals solely because of the fact Barca have sold him for €72 million just two years later. That, in 2020, is a football transfer success.

As a player, though—and that's where we'll actually judge this transfer—he has been solid: press-resistant, neat and tidy on the ball and capable of threading the needle with a pass. He didn't excel in either the defensive or attacking third but dominated the middle one at times.

Barca struggled to get the best out of him in the way Brazil and Gremio did, but he was still a dependable presence in the centre.

"I have surely had the worst season of my career individually," Hazard recently told France Info (h/t Goal).

That's not the tune you want to strike out of a €100 million man, but Hazard is nothing if not frank; with two problematic foot injuries haunting his campaign, he made just 14 La Liga starts and managed only a single goal.

But throughout this list, we have utilised an element of projection for the newer deals or younger players, and it would be unfair not to do the same for Hazard. With that in mind, and with memories of his dovetailing with Karim Benzema beautifully post-lockdown, you can only see good things ahead (fitness permitting).

It ranks low in the list because €100 million is a lot of money, and he's 29 with a propensity to get hurt. But at top form, he's the sort of player who's worth that sum, and good fitness should pave the way for a devastating second season.

"Madrid will sign the best again when the situation changes," president Florentino Perez told El Transistor (h/t ESPN) last week, confirming no major signings will be made in 2020.

The coronavirus pandemic has played a big part in that decision, but so will the fact that Madrid have a glut of superb young players coming through who can make an impact in lieu of new arrivals. Rodrygo is one of many, but crucially for him, he plays in one of the few weak positions Los Blancos have: right wing.

He's flashed quality over the course of 2019-20, bagging a perfect hat-trick against Galatasaray and scoring in four separate other games. He's technically very clean, cuts inside on to his left foot well but can also go the other way and has an assertiveness and decisiveness to his playing style.

With the Gareth Bale situation a big question mark, Rodrygo has the chance to nail down a spot in the starting XI over the rest of 2020 and grow into something special.

It's impossible to escape the feeling Frenkie de Jong hasn't shown his best form for Barcelona.

It's also impossible to escape the feeling that his form is coming, and that this transfer will pay dividends in the years to come.

We've seen him sparkle in games, feeding Lionel Messi the ball and ghosting through tackles; we've also seen him deployed in wider positions and struggle to find his rhythm. The likelihood is his Barca career will settle down when the club and managerial situations settle down, and he'll show his old Ajax form in Blaugrana colours.

De Jong looked made for Barca before he arrived, and what he's managed in season one hasn't changed that assertion.

That summer, he went to UEFA Euro 2016 with France, stepping in during the knockout stages to win his first cap against Iceland and then keeping his place for the Germany and Portugal games. Barcelona were likely sat there smiling; they had secured his signature just days before his international debut got everyone talking.

For two years, he was a rock at the back alongside Gerard Pique, looking every bit the complete centre-back. Things have been tougher of late, with injuries hampering his momentum to the point that 2020 performances have actually looked quite poor. But considering what they have already got from him, plus his cheap price, Umtiti (26) is a success story who could yet rediscover his top level in the future.

It can't be easy arriving at Real Madrid as a €48 million specialist left-back and introducing yourself to Marcelo—the man who has held the position for a decade and has more trophies to show for it than a single room could house.

But Ferland Mendy (with the help of a few Marcelo injuries) has clocked more than 20 starts at left-back this season and has been picked for some big games. Manager Zinedine Zidane appears to value his more secure, defensively conscious style.

He mixes a mindful defensive game with a strong attacking one, boasting the recovery pace (and mentality) to impact in every phase. Left-footers like that are rare; Real Madrid have a gem.

Madrid's decision to drop €45 million on a 16-year-old from Brazil raised eyebrows across the globe, but they had come to the same conclusion anyone else does after seeing him kick a ball for five minutes: the kid is destined for greatness.

He's been integrated slowly at the Bernabeu, coming in for spells and then stepping aside, with only one major issue arising during his first year or so in Spain. He struggled to compose himself at the end of his majestic dribbles, often skewing shots or making the wrong decision.

In 2020, he's made big strides in this area—the disallowed goal at the end of the recent win over Villarreal, where Vinicius beat five players from the corner flag to tee up Marco Asensio, stands as evidence of this—and when it finally, fully clicks, Madrid will have a world-class winger on their hands.

Fresh off the back of a stellar performance at the 2018 FIFA World Cup in Russia, Madrid snagged Courtois for just €35 million as he only had a year left on his contract at Chelsea.

His first season was pretty bumpy, and the presence of Keylor Navas—a man who had won four Champions Leagues in five years—vying with him for the spot between the sticks complicated matters.

This term, we've seen Courtois at his best, though. With Navas gone, and the defence improved, things were always going to get better, but the big Belgian has produced some sensational individual performances and saves that have visibly contributed to results and their title win.

At peak level, he is one of the five best goalkeepers in the world, and the price tags for the others in that bracket, like Alisson Becker and Jan Oblak, seem to range from around €70 million to €100 million. Courtois for half that lower figure is a steal.

Real Madrid have dominated this list as they've steadily signed excellent players and prospects over the past five years, but the common theme is they have tended to pay a lot.

Aside from Marco Asensio and his paltry €3.5 million fee, the average price of the Madrid players in this list is €45.5 million. Just one of those deals would shatter most clubs' transfer records, and they have made six transfers of that ilk.

But Asensio is different—a rare bargain find for a club accustomed to paying top dollar.

It can be argued an ACL tear last summer is the only reason he hasn't forced his way into Zidane's starting XI on a permanent basis. And now he's back to fitness, he's impressing greatly.

His combination of rapier-like speed, directness, crossing and shooting make him so difficult to deal with; he's willing to take the ball and try to make the difference over and over.

In terms of money spent vs. returns and player potential, Asensio is the clear No. 1 in this list, representing one of the great bargains of the past decade.