"I turned in LeBron yesterday," he joked about the hotline the NBA installed for people to anonymously report players who violate the rules of the campus-like environment amid the COVID-19 pandemic, per Ohm Youngmisuk of ESPN. "I turned Pop in today. I am trying to turn all these guys in. ... We are going to be the only team left when I am done. ... No, I don't think it's a problem."

While Rivers was joking, he made sure to point out the importance of taking things seriously amid a pandemic.

"This is not some normal thing," he said. "COVID, obviously, not only can you get sick but you can get other people sick. This is very important for all of us. We want to do our jobs. So having a hotline, I guess that's important."

Rivers' joke comes after Shams Charania of The Athletic and Stadium reported there have been "multiple tips" filed to the hotline regarding potential protocol violations. What's more, a handful of players have received warnings for violations as the league does its best to manage the pandemic inside the bubble environment.

Of course, filing a complaint against LeBron James and having him suspended would be one way for the Clippers to make up ground on the Los Angeles Lakers. 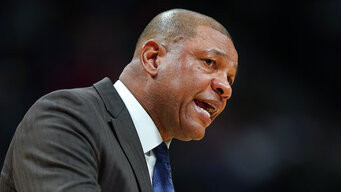 Rivers' Clippers are 44-20, which is good enough for the No. 2 seed in the Western Conference but 5.5 games behind the Lakers. Considering they have just eight seeding games to play before the postseason, the Clippers will likely have to settle for a different seed than the No. 1 spot.

The two Los Angeles teams play each other on July 30 in their first seeding game.

Considering Rivers was joking, expect to see James suiting up for the Purple and Gold.