Andre Drummond only played eight games with the Cleveland Cavaliers before the NBA went on hiatus because of the coronavirus pandemic, yet that may have been enough time for both sides to consider a long-term future together.

According to Chris Fedor of Cleveland.com, there has been mutual interest between Drummond and the Cavs to get an extension done for the 26-year-old.

Yet there are a few factors that could change that, per Fedor:

"At this point, sources say, both sides have shown interest in an extension. But there's so much to figure out before late October, when Drummond could technically sign a new deal.

"What happens if the Cavs draft either Memphis center James Wiseman, who shares the same agent with Drummond, or USC's Onyeka Okongwu? Would the Cavs, after picking their center of the future, really turn around and give a lucrative, lengthy deal to Drummond? That would be a massive investment in a position that continues to lose its importance. Would Drummond really commit to a team that just chose his eventual replacement?

"The Cavs also have to determine whether a commitment to Drummond is even worth it. It's one thing for him to opt in and swallow their cap space in a feeble free agency summer. But a long-term deal could take away Cleveland's financial flexibility for the foreseeable future."

Cleveland traded Brandon Knight, John Henson and a 2023 second-round draft pick to the Detroit Pistons for Drummond at the deadline in February. The seven-year vet averaged 17.7 points, 15.2 rebounds and 2.7 assists this season while shooting 53.3 percent from the field. 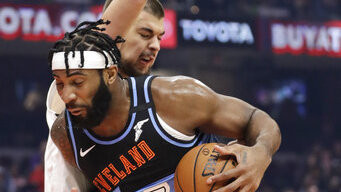 Drummond may be in the prime of his career, but the Cavs are far from contenders, having gone 19-46 in their shortened season—the worst record in the Eastern Conference.

The center has a player option for next season that would pay him $28.75 million, per Spotrac.com. Should he exercise the option, Drummond would become a free agent following the 2020-21 season unless he agrees to an extension with Cleveland.