Dustin Poirier and Dan Hooker had the potential to deliver one of the best fights of the year, and they didn't disappoint in a unanimous-decision win for Poirier.

The affair was a five-round battle featuring a little bit of everything.

The two lightweights didn't waste time in getting to the action. Hooker pushed the pace early, but it didn't take Poirier long to figure out the range and return fire.

The two only elevated the intensity in the second frame. Both fighters landed punches that would have knocked out lesser fighters, and both were more concerned with landing their offense than fending off their opponent.

Just two rounds in, it was already shaping up to be a Fight of the Year front-runner.

These two are just bombing on each other 😳 #UFCVegas4 https://t.co/FVE8rUKhCG

The nonstop action on the feet took a short break in the third round. Hooker landed a takedown that was countered by a deep guillotine attempt from The Diamond and an active guard once Hooker worked his way out of it.

That dynamic would continue into the fourth round, when the two sprinkled back-and-forth grappling with their epic striking exchanges. Poirier transitioned from submission to submission, including an omoplata. He also scored a takedown of his own and did some damage while trying to take Hooker's back.

With the fight potentially tied at two rounds apiece, the fifth and final round was a crucial one, and it delivered. Poirier finished strong, landing a litany of punches on the inside, while Hooker continued to walk through all of them.

The victory gives Poirier a bounce-back win in his return fight from his third-round submission loss to Khabib Nurmagomedov at UFC 242 in September.

Outside of the featured lightweight bout, it was a fun night of fights. Mike Perry turned in a peak performance, Maurice Greene pulled off a unique submission win, and Takashi Sato scored an impressively quick knockout.

Maurice Greene def. Gian Villante via submission (arm-triangle) at 3:44 of Round 3

Julian Erosa def. Sean Woodson via submission (D'Arce) at 2:44 of Round 3

Khama Worthy def. Luis Pena via submission (guillotine) at 2:53 of Round 3

Kay Hansen def. Jinh Yu Frey via submission (armbar) at 2:26 of Round 3

Mike Perry is officially 1-0 with his girlfriend Latory Gonzalez in his corner. Platinum made the unorhtodox decision to leave his gym and have Gonzalez, who has no cornering experience, be the sole voice for him between rounds.

As it turns out, the decision didn't appear to negatively impact his performance in any way.

After a competitive first round Perry gained momentum over the course of the final two rounds. He put Gall on the floor with his striking and even won the grappling exchanges, the area where Gall was expected to have an advantage.

Perry's approach to the fight may have been non-traditional but he has to be happy with these results. He is 2-5 in his last seven fights but Gall represented a fairly large step down in competition.

Regardless of his record, Perry is always a fun action fighter who is willing to swing for the fences. This win keeps that reputation in tact and makes it interesting whether he will keep going forward without a traditional team behind him in the future.

Gian Villante's move to heavyweight didn't pan out the way he hoped, but it did provide fans with a bit of a bizarre fight.

Villante, who was fighting at 255 pounds after a career's worth of fights at light heavyweight, looked slower and outmatched for much of the first two rounds. Maurice Greene's length carried the day, as he was able to land much more often than his opponent, while Villante really only found success in leg kicks.

Then Villante got into the fight in the third round when he landed a quick left hook that floored Greene.

With the new heavyweight going to work with ground-and-pound, it looked like he may finish the fight or at least earn a 10-8 round that would have made the scorecards interesting. Instead, while it appeared Greene was simply holding on for a stand-up, he actually had a choke that forced Villante to tap and went in the books as the rare arm-triangle from bottom.

WHAT A TURN OF EVENTS! 🤯 @TheCrochetBoss submits Villante w/ just a minute to go! 📺 Action concludes on @ESPN. #UFCVegas4 https://t.co/ziU21wwTUI

The Crochet Boss notched his second submission win in the UFC. He won his debut against Michel Batista by triangle choke but had lost back-to-back fights before picking up an important win on Saturday.

We learned two things in this battle of a middleweight fight: Brendan Allen is more than just a grappler, and Kyle Daukaus is tough.

While both of these fighters are known for their grappling and submission skills, Allen made the first impactful move in the fight when he dropped Daukaus with a huge knee. He tried to jump on a submission but was denied, as Daukaus' toughness and ability to scramble kept him going.

He did, however, open up a cut on his eye that flowed for the rest of the fight. Allen once again held an advantage in the second round, with the fight featuring more striking than expected. There was almost a controversial conclusion to the bout after Allen blasted Daukaus right after the horn blew to end the round.

Kyle Daukaus gets dropped right at the horn 😬 #UFCVegas4 https://t.co/pK2H7rSJe8

Daukaus was not only able to get to the stool at the end of the round but also came back to control the fight in the third round. He nearly got a rear-naked choke after taking Allen's back, but the ultimate winner was able to survive the threats and earned the nod on all three judges' cards.

The win gives Allen three straight since signing with the UFC. He also holds wins over Kevin Holland and Tom Breese, so it will be interesting to see how quickly the organization wants to bring him along after a win over an undefeated newcomer in Daukaus.

Sato threw a right-left combo straight down the pipe that floored Witt, who was making his UFC debut, and it proved to be the beginning of the end. Witt struggled while attempting to grab on to a leg, but Sato showcased the killer instinct that has led him to 10 first-round finishes.

The victory gets the 30-year-old back in the win column after a third-round loss to Belal Muhammad at UFC 242. Sato is just over a year removed from his UFC debut in which he beat Ben Saunders by second-round TKO.

Witt stepped in on short notice for the fight. Sato was scheduled to fight Ramiz Brahimaj, who was forced to withdraw after one of his cornermen tested positive for COVID-19.

The second UFC fight for undefeated Sean Woodson was supposed to be another spotlight moment for the featherweight. Julian Erosa went full-on spoiler mode to ruin that, though. He sunk in a D'Arce choke to bring the fight to a stunning conclusion in Round 3.

Woodson used his immense 78-inch reach to establish a lead in the first round as expected. Erosa rallied in the second round, however, to turn the fight into a war; both fighters threw over 300 strikes in the first two rounds.

Woodson rocked Erosa in the third, but the underdog kept coming forward undeterred, and his grittiness paid off. He latched onto the choke in the middle of a scramble and forced the finish.

Julian Erosa got dropped and the first thing he does after getting back to his feet is to throw a flying knee 🤯 @juicyj_erosa #UFCVegas4 https://t.co/LgvbXSZBRx

Erosa came into the evening with three straight losses since entering the UFC. Now he's the first one to hand Woodson a loss and showed a propensity for slugfests that should see him get at least another fight under the UFC banner. 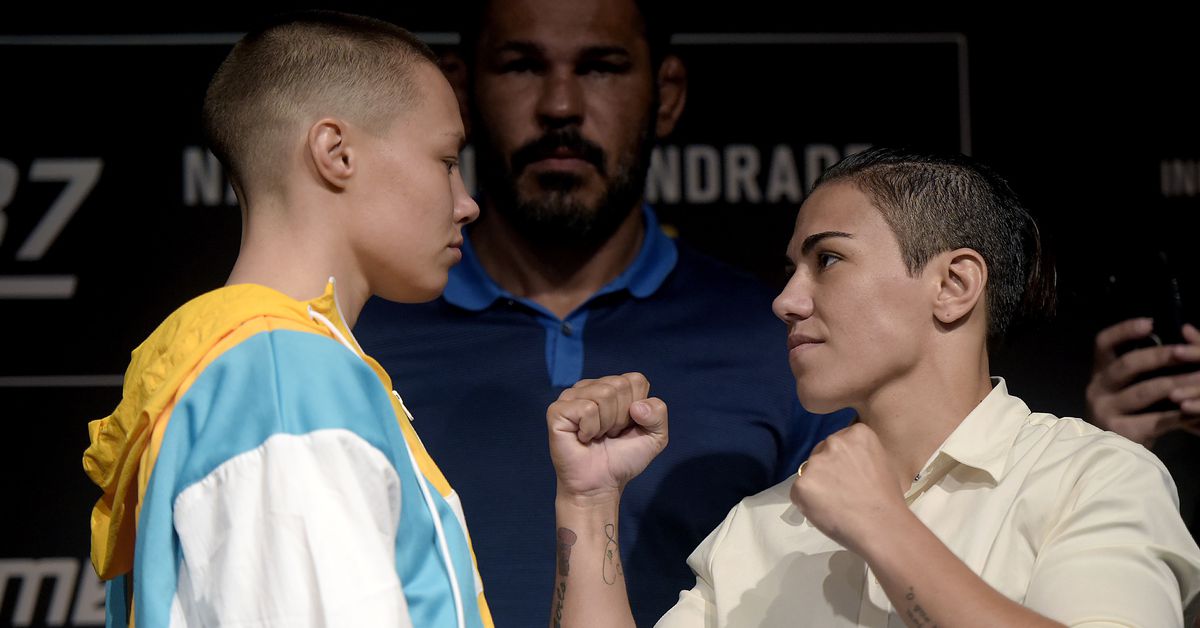