While Clemson's Trevor Lawrence is the favorite to become the NFL's No. 1 overall pick in 2021, there are plenty of scouts who believe North Dakota State counterpart Trey Lance could usurp the Tigers junior-to-be by next April.

NFL Network draft analyst Bucky Brooks told The Athletic's Bruce Feldman not to be surprised if Lance, who will also be a junior, goes on a Joe Burrow-like ascent this year:

"Trey Lance could emerge as a contender for the No. 1 spot due to his combination of athleticism, poise and playmaking ability. He reminds me a lot of Deshaun Watson with his style of play. He can carve you up from the pocket or use his legs to create plays on the perimeter. He takes good care of the ball. Most important, he wins. With NDSU producing pros at the position, scouts are going to take him seriously as a prospect, and the NFL's shift towards more athletic playmakers at the position could help him climb the charts."

Brooks is far from the only scout expecting big things from the 6'3", 224-pound Lance.

In his first big board for the 2021 draft, Bleacher Report's Matt Miller listed Lance as the fourth-best player available, tossing a compliment his way that's sure to raise plenty of eyebrows: 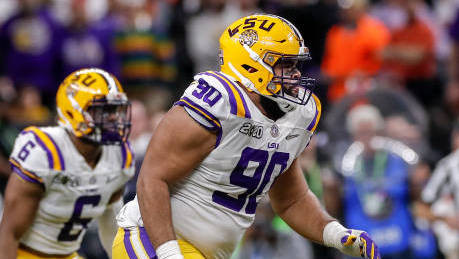 "Lance has to avoid the sophomore slump that plagued many top prospects before him, but he has plenty of athletic potential, arm talent and ability to dominate games. There will be questions about the level of competition he's facing, but the throws and runs he makes would work against LSU just as well as they do against James Madison."

The Minnesota native was an absolute force in 2019, passing for 2,786 yards, 28 touchdowns and zero interceptions while adding another 1,100 yards rushing with 14 scores.

His potential will have NFL scouts flocking to Fargo the way Carson Wentz did in 2015.

Wentz was coming off a similarly dominant season entering his senior year, having passed for 3,111 yards, 25 touchdowns and 10 picks with a QB rating of 154.1.

Only a broken wrist which cost him eight weeks of the season stopped Wentz from topping those numbers in 2015. They were enough to earn him consideration as the top pick anyways.

Wentz was selected No. 2 overall by the Philadelphia Eagles. Now Lance will try to top that. If successful, he'll become the school's highest draft pick ever.