Both NBA players and owners are focused on concluding the 2019-20 season when action eventually resumes across the league, according to ESPN's Ramona Shelburne.

Shelburne said Monday on Outside The Lines that "no matter what, they want to salvage the season—if that's in July, if that's in August, if that's in September, so be it."

“No matter what, they want to salvage the season.” @ramonashelburne explains the sense among #NBA owners and players as they try to plan for basketball post #COVIDー19 https://t.co/hvoUxfhXPg

The NBA suspended games indefinitely March 11 because of the coronavirus pandemic.

The Centers for Disease Control and Prevention effectively ruled out a return before mid-May when it recommended an eight-week halt to events with more than 50 people to limit the spread of COVID-19.

ESPN's Adrian Wojnarowski reported NBA owners "are bracing for the possibility of mid-to-late June as a best-case scenario" for when the 2019-20 season might resume. According to Wojnarowski, one plan discussed by the NBA included games in empty arenas, with the playoffs extending into August.

Even assuming the date didn't get pushed back further, the lengthy hiatus would create a domino effect for 2020-21.

The New York Times' Marc Stein reported some around the NBA are lobbying for a schedule where free agency would start in September and the regular season would tip off on Christmas Day: "It is hardly unanimous, but there is a faction eager to turn the delay forced upon the league by the coronavirus outbreak into an unexpected testing ground."

Stein noted that league calendar would put the NBA in less direct competition with the NFL and college football and instead match it up against MLB for the bulk of the year. 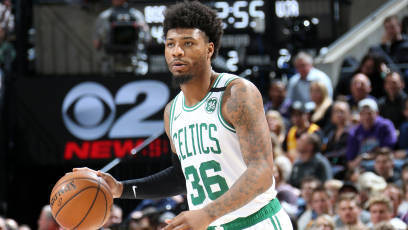 Especially if the stakeholders are invested in completing this season in order to properly crown a champion, the NBA could experience long-term logistical repercussions from the ongoing situation.