Brian Dutcher has been patiently waiting for decades to lead San Diego State men's basketball to this point.

There are longtime assistants, and then there's Dutcher, who spent 27 seasons as Steve Fisher's right-hand man—nine years at Michigan followed by 18 with San Diego State.

Now in his third season as a head coach, the 60-year-old who was at least partially credited with bringing together the Fab Five in the early 1990s has a fabulous squad of his own, legitimately threatening to carry an undefeated record into the 2020 NCAA tournament.

And perhaps even through it.

There are two undefeated teams remaining in men's college basketball, and we certainly mean no disrespect to 14-0 Auburn by homing in on 16-0 San Diego State here. But Auburn has to play at Florida next weekend, and it has two games against Kentucky in February. Throw in two games each against Tennessee, Alabama and Georgia, plus the SEC tournament, and we're going to have plenty of opportunities in the next two months to try to figure out just how legitimate the Tigers are.

They're good, but it's extremely unlikely they'll run the table.

It could (maybe even should?) be 32-0 on Selection Sunday, and there would still be people questioning whether the Aztecs are for real. Those people will cite the lack of competition in the Mountain West Conference and the fact that SDSU has never been to the Final Four as reasons to cast aspersions on this year's team.

You'll probably recognize it as the way folks used to talk about Gonzaga before it finally messed around and almost won a national championship.

Fittingly similar to that Gonzaga team from a few years ago, San Diego State has built this juggernaut on the backs of transfers. Where the Zags had Nigel Williams-Goss (Washington), Jordan Mathews (California) and Johnathan Williams III (Missouri) in the starting lineup all season long, the Aztecs have Malachi Flynn (Washington State), Yanni Wetzell (Vanderbilt) and KJ Feagin (Santa Clara) leading the team in minutes played.

Feagin has been nowhere near the player Brian Dutcher and Co. thought they were getting. He shot 49 percent from three-point range as a sophomore and averaged 17.5 points per game as a junior, but he is sitting at 33.9 percent from the field through 16 games and has been held to seven points or fewer in each of his last seven games against D-I opponents.

But while O-rating, PER and basically any advanced stat you can find paints the picture of a guy who is doing more harm than good, Feagin has been—as the San Diego Union-Tribune's Mark Zeigler put it—SDSU's Mr. Intangible.

"We'll get done with a game and not think he played particularly well, like most fans, because the ball didn't go in," Dutcher told Zeigler. "Then I'll go back and watch the tape and say, 'Wow, what a great play defensively. Wow, what a great drive and kick.'"

If he ever flips the switch and starts making shots at a respectable clip again, San Diego State's championship potential grows even stronger.

Despite Feagin's shooting and turnover woes, the Aztecs are having an atypically efficient season on offense. They entered play Thursday ranked 33rd in the nation in adjusted offensive efficiency, per KenPom, which is their best ranking since finishing the 2010-11 season in 28th place. (That was the year Kawhi Leonard led them to a No. 2 seed in the NCAA tournament and a trip to the Sweet 16 before running into Kemba Walker.)

That's because four Aztecs are averaging at least 10 points per game, led by Flynn, who has been the best player in the country that not enough people are talking about.

The former Cougar is averaging 16.1 points and 4.9 assists per game with a 3.3 assist-to-turnover ratio and more steals per game (1.7) than turnovers (1.5). He was outstanding on back-to-back nights against Creighton and Iowa while propelling San Diego State to a surprise championship in the Las Vegas Invitational, and he has continued to thrive in Mountain West Conference play.

Oddly enough, his worst performance of the season also featured one of his top highlights.

Flynn shot 3-of-13 from the field against San Jose State in what is still his only game this season with more turnovers than assists, but his three-pointer with less than one second remaining was the difference in a 59-57 rock fight.

If he misses that shot and San Diego State loses a home game to annual Mountain West bottom-feeder San Jose State, the Aztecs never become "a thing." They weren't even ranked at the time of that Dec. 8 game, and they certainly wouldn't have climbed all the way to their current position of No. 7 in the latest AP poll.

Despite Flynn's stats and heroics, there's some sort of unofficial/unconscious rule in college hoops that we're only allowed to fall in love as a nation with one non-major conference player per season. And sadly for Flynn's National Player of the Year marketability, Dayton's Obi Toppin locked down this year's honor during the Maui Invitational. Just let it be known that Flynn has been especially impressive, too.

As always, though, the biggest key to San Diego State's success has been its defense.

Over the final 11 years of Fisher's tenure, the Aztecs often couldn't hit water in the ocean on offense. But they still averaged nearly 26 wins per year and had a streak of six straight NCAA tournament appearances during that time because they consistently made life miserable for the opposing team's offense. San Diego State ranked in the top 60 in adjusted defensive efficiency (AdjDE) in each of those years, including four seasons in the top seven.

That discipline on defense has persisted under Dutcher, as the Aztecs currently rank 14th in AdjDE with a rating of 88.2—their best in KenPom history. They've held half of their opponents to 52 points or fewer and have yet to allow more than 73 points in a game.

That's quite the turnaround from last season when six of their first 14 opponents put up at least 81 points.

Even in their worst defensive effort of this season in terms of points allowed and points allowed per possession, they still beat Iowa with defense, holding its star big man Luka Garza to nine points and eight rebounds—which are still season-worst marks in both categories for Garza.

If the Aztecs can slow that guy down, what can't they do?

Framed another way, if Iowa—ranked fifth in the nation in adjusted offensive efficiency—couldn't figure out this defense, what hope is there for the rest of the Mountain West Conference?

Maybe Air Force has a prayer. The Falcons host the Aztecs on Feb. 8 and currently boast the nation's seventh-best effective field-goal percentage. They have made at least 13 threes in four of their past eight games. But they are a train wreck on defense, so it's likely San Diego State will just win in a higher-scoring blowout than usual.

Road games against New Mexico (Jan. 29) and Nevada (Feb. 29) theoretically could cause problems for the Aztecs, but both of those teams have already lost to San Jose State in 2020. If those are the biggest hurdles standing between Dutcher's guys and an undefeated regular season, it's hard to envision them tripping at any point.

KenPom gives SDSU a 7.5 percent chance of going undefeated, but also puts its win probability at 68 percent or greater for each remaining game. At any rate, San Diego State has already won its four toughest games of the season—at BYU, at Utah State and the games against Iowa and Creighton in Las Vegas.

You might be thinking, You seriously expect us to trust anyone this season? Need I mention Stephen F. Austin and Evansville beating Duke and Kentucky, respectively?

Fair point, but here's a counterpoint: Without anything resembling a major-conference juggernaut this season, isn't this the ideal setup for an undefeated mid-major national champion?

If the Aztecs do run the table, they are a shoo-in for a No. 1 seed, as they're currently No. 2 in the NET rankings. Perhaps they'll get hosed like Wichita State did in 2014, drawing a way-better-than-its-resume Kentucky as a No. 8 seed in the second round, but they wouldn't need to face a No. 1-3 seed until at least the Elite Eight.

And, who knows, in this marginally-more-unpredictable-than-usual season, the rest of the bracket could come crumbling down like it did for that Leonard-led Aztecs team in 2011, when the regions aside from San Diego State's sent No. 4, No. 8 and No. 11 seeds to the Final Four.

Even if things hold to form and they run into a Duke, Gonzaga or Kansas in the Final Four, the Aztecs could win.

If you don't believe me, make it a point to watch this team as soon and as often as you can. Saturday's game against Boise State is on ESPN3. They'll play on ESPN2 against Fresno State on Tuesday. And if you get CBS Sports Network, just about every other SDSU game will be on that channel.

If nothing else, you'll be able to impress your friends with your random Aztecs knowledge when they make their way to the Elite Eight for the first time in program history.

Kerry Miller covers men's college basketball and college football for Bleacher Report. You can follow him on Twitter: @kerrancejames.

Aztecs' Nathan Mensah has 'outside chance' of returning this season 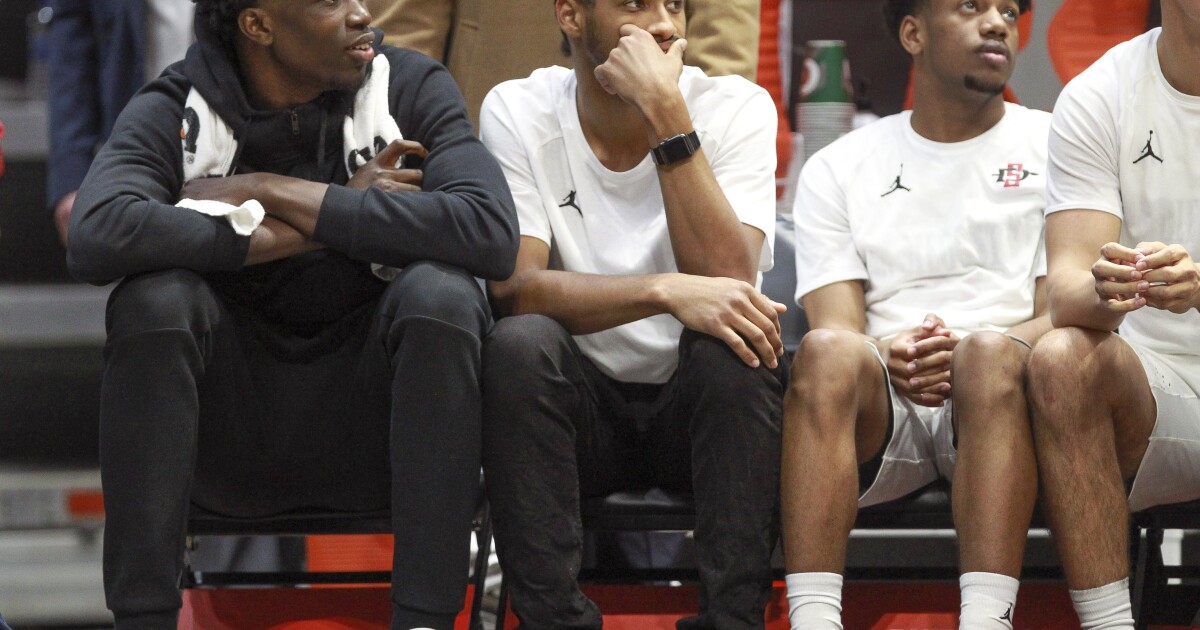 Aztecs' Nathan Mensah has 'outside chance' of returning this season

Top Programs in Danger of Missing the Tournament 😬

It might be time to push the panic button

Top Programs in Danger of Missing the Tournament 😬

No. 4 Auburn's Undefeated Season Ends in Upset vs. Unranked Alabama

No. 4 Auburn's Undefeated Season Ends in Upset vs. Unranked Alabama