Chris Paul was caught off guard by the offseason trade that sent him from the Houston Rockets to the Oklahoma City Thunder.

"My initial reaction?" Paul said. "I was shocked. Truth be told, I just talked to Daryl a couple days before the trade and he said he wasn't going to trade me [to Oklahoma City]. That's funny because that is going to be the alert that pops up on everybody's phone because nobody knows that. But what the hell, I just said it."

Despite being traded to a rebuilding situation in Oklahoma City, Paul is happy because he's "just grateful to be hooping," and he added, "It could be a lot worse."

As for Paul's relationship with James Harden, the nine-time All-Star noted the two "haven't really talked" since the trade, but he wishes him "nothing but the best."

The partnership between Paul and Harden began well, with the duo leading the Rockets to a franchise-record 65 wins in 2017-18. They lost to the Golden State Warriors in the Western Conference Finals in seven games, with Paul missing the final two games due to a hamstring injury. 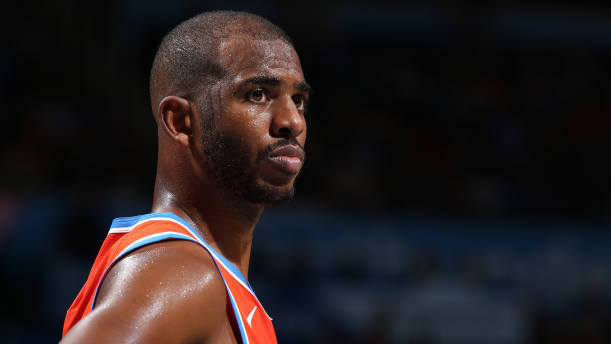 After the Rockets' playoff loss to the Warriors last season, there were reports of tension between Paul and Harden during that series.

Per Shams Charania of The Athletic and Stadium, Houston's superstar pairing had a "verbal exchange" regarding ball distribution during Game 6 against Golden State.

Charania added there had been problems brewing throughout the course of the 2018-19 season, "with members of the team—most notably Paul—having spirited discussions with Mike D'Antoni about the offense and pushing for more movement."

ESPN's Tim MacMahon reported in June there was "friction" between Paul and Harden, and Morey was "aggressively" shopping players under contract, including Paul and Clint Capela.

One possible explanation for Morey assuring Paul a trade wouldn't happen is because Houston's general manager didn't want to deal the 34-year-old.

The Rockets wanted to make an aggressive push to add Jimmy Butler in free agency, but he ultimately wound up joining the Miami Heat.

Morey ultimately made the move sending Paul to Oklahoma City, along with two first-round draft picks and two pick swaps, and bringing Russell Westbrook to the Rockets.

Paul is having a solid season leading a rebuilding Thunder team. He is averaging 15.7 points, 5.7 assists and 4.2 rebounds in 19 games.