The Louisville Cardinals have a marquee victory to go with their No. 1 ranking.

Louisville defeated the No. 4 Michigan Wolverines 58-43 on Tuesday at the KFC Yum! Center, improving to 8-0 on the campaign. The only knock on the Cardinals was the fact they had just one win over a power-conference opponent (Miami) to this point, but Jordan Nwora led the way in changing that in dramatic fashion.

He also helped his conference earn a high-profile win in the 2019 Big Ten-ACC Challenge.

As for the Wolverines, they have already built a notable resume at 7-1 with impressive victories over Creighton, Iowa State, North Carolina and Gonzaga.

Louisville certainly looked the part of the No. 1 team in the country tonight. Jordan Nwora was sensational, Steven Enoch with a double-double and the Cardinals defense did a tremendous job tonight. Didn’t give Michigan’s shooters of Livers and Brooks open looks. 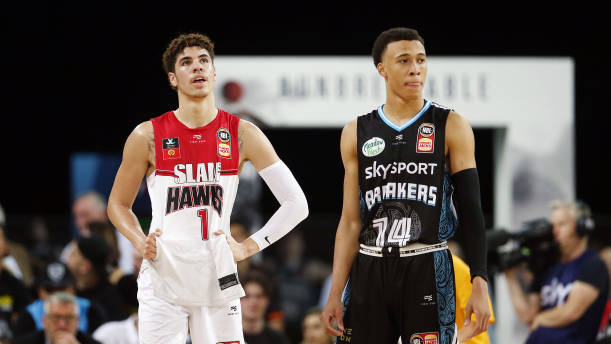 The Wolverines have already built a resume worthy of early No. 1 seed discussion with a Battle 4 Atlantis championship that included wins over Iowa State, No. 7 North Carolina and No. 9 Gonzaga, and Juwan Howard's program appears ahead of schedule in his first season as head coach.

They went from unranked to No. 4 in the Associated Press poll, which matched the largest jump in the 70-year history of the rankings, per Cassandra Negley of Yahoo Sports.

However, Michigan could be forgiven if fatigue started to set in entering its third game against a top-10 foe in six days. That it was against the swarming defense of Louisville didn't make life any easier for the Big Ten squad.

Michigan's offense currently shoved in a small closet. Zavier Simpson can't breathe out there. Matters only getting worse as Louisville is starting to make shots and the building is starting cook.

Every look Michigan gets is contested. Nothing coming easy. A 1-for-7 start for a team that made damn-near everything for Atlantis. Good news for Michigan is its own defense is getting the job done, too.

It would seem, at least for now, that Michigan's poll vault was premature.

It's 28-18 Louisville over Michigan at halftime. Honestly doesn't feel that close. Juwan Howard deserves a contract extension for winning the Bahamas tourney with this group.

Part of that is Louisville's ability/focus on running Michigan off of the three-point line. But a lot of it has had to do with their ability to eliminate Michigan's ball-screening, which is how they create a lot of those open threes.

The Cardinals contested nearly every shot, clogged traffic in the lane and sent additional defenders at big man Jon Teske when needed. The Wolverines managed a mere 18 points in the first half and consistently stalled without any open looks.

While Howard's team pulled within single digits with a quick run to start the second half, it struggled to sustain any meaningful momentum. It shot an ugly 25.9 percent from the field and 15.8 percent from deep, and a combined seven turnovers from guards Zavier Simpson and Franz Wagner proved costly to any comeback hopes.

The Wolverines will need to be better on the offensive end during conference play, but they also won't face many situations in which they play the daunting defense of a No. 1 team a couple of days after traveling from back-to-back contests against top-10 foes in the Bahamas.

The headline matchup entering play was the one between Louisville's offense and Michigan's defense.

According to Ken Pomeroy's pace-adjusted rankings, the Cardinals boast the No. 2 offense compared to the Wolverines' No. 12 defense. Michigan also held North Carolina and Gonzaga to just 64 points apiece in impressive showings and had plenty of confidence on that end of the floor.

Nwora was the ideal candidate to break that defense as a matchup problem who can light it up from downtown and attack the lane, but Louisville didn't even manage to reach the 64-point mark.

Sixteen NBA scouts from 15 teams are in the building for tonight's game. I would assume most are here to see Jordan Nwora.

Jordan Nwora ends a brutal stretch of ball for both teams with a layup and one, then urges on the crowd to get loud(er): "Hey! Hey! C'mon!"

Jordan Nwora is feelin' it right now. Hits another one and asks for more from the crowd -- and they get loud for him.

Fortunately for the home team, there wasn't much pressure on its offense given how well it played on defense. Nwora didn't need to explode for 30-plus points and was instead fine picking and choosing his spots in a low-scoring affair.

He did just enough of that, including an and-1 and another jumper on back-to-back possessions to go up 14 with under three minutes remaining. He consistently had the ball in his hands down the stretch and nearly single-handedly kept the Wolverines at bay with critical baskets whenever they cut into the lead.

If Louisville's defense plays like it did Tuesday, that will be enough for most of the season.