Roughly one month into the NBA regular season, the Houston Rockets' Russell Westbrook experiment is unfolding as expected: unevenly, with little to no evidence that his arrival has helped or hurt their championship chase.

This is not a knee-jerk reaction to Friday night's 122-119 loss to the Los Angeles Clippers. The Rockets didn't learn anything about themselves they don't already know.

James Harden is the most divisive star in the league, save for maybe Westbrook, but he's a master at his craft. He churned out 37 points, eight rebounds and 12 assists while shooting 14-of-18 at the line with a plus-six.

The Rockets, however, still need to figure out how to win the minutes in which he's not on the floor. Nifty outings from Clint Capela (17 points, 19 rebounds) and Ben McLemore (14 points, solid defense) weren't enough when they were getting whacked without Harden. They know this.

What they don't know is whether Westbrook can be part of the solution. His arrival hasn't been exposed as a sham, but they're not taking a victory lap either.

Houston's latest loss did nothing to clarify its reality. Westbrook provided a few offensive jolts on the break and while attacking the basket (22 points, six assists). He also missed some bunnies near the basket, committed six turnovers, fouled out and bricked six of his seven threes, including one inexplicable late-game trey with the Rockets trailing by one: 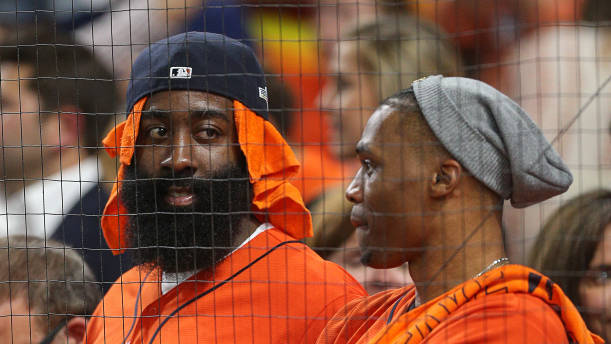 Russell Westbrook bricked a 3 towards the end of the game, which led to Patrick Beverley making fun of him and Westbrook calling him "trash" (h/t @WorldWideWob) https://t.co/zuyCrP3kIu

Crappy shot selection with even crappier timing is part of the Westbrook experience. Teams live with it—at least, they have thus far—because the force with which he plays can overwhelm defenses.

Russell Westbrook is the only player of his skill level shooting the basketball that would take a 3 in that situation. He takes the dumbest shots, man. It’s so hard to watch

These moments are a conscious trade-off in service of the bigger picture, and the Rockets' long game is hardly hopeless. They're 11-5, third in the Western Conference and fifth in points per 100 possessions. Their defense is pleasantly mediocre (16th). The Harden-Westbrook dynamic isn't seamless, but it also isn't not working.

Houston is outscoring opponents by 6.2 points per 100 possessions when they share the floor, a net rating that ranks in the 75th percentile. Westbrook isn't shooting well during these stretches—or off passes from Harden—but the fit hasn't proved impossible to navigate.

Some possessions are easier than others. The Rockets would be much better off if plays like this were the standard:

Russell Westbrook catch and shoot 3 off a James Harden pass. It can really be that simple. https://t.co/M7OKU2eEz5

It is not always this simple. Westbrook is shooting just 18.2 percent on catch-and-fire threes and only 15.2 percent on triples off passes from Harden. His jumper is the elephant inside and outside the arc.

But the Rockets have empowered him to push the pace. They're in the top 11 of transition frequency and efficiency, and only one team is scoring at a higher clip after grabbing a defensive rebound, according to Inpredictable.

As ever, Westbrook can be out of control when granted this freedom. He's coughing up the ball on 14.8 percent of his transition possessions. But he's shooting better on the break than last season and getting to the line almost on command. Just over 23 percent of his transition opportunities are ending with a free throw, the fifth-highest share among 51 players finishing at least three such possessions per game.

This hasn't dissuaded defenses from resorting to extremes against the Rockets. They're beyond comfortable doubling Harden. He is a warlock with the ball, so he'll make them pay, but the indiscriminate focus he's seen speaks to the lack of concern for his supporting cast:

Rockets’ James Harden on the attention he’s seeing: “The whole season they’re running doubles teams at me. I’ve never seen that in an NBA game where you’ve got really good defenders &amp; someone else running at the top of the key. Y’all let me know the last time you’ve seen that.” https://t.co/eVxRUgds76

That includes Westbrook. Defenses haven't noticeably shape-shifted their approach when he's beside Harden. The Clippers threw two bodies at Harden for most of Friday without regard to who was around. They didn't fear wide-open threes from McLemore and Thabo Sefolosha or the prospect of Westbrook catching the ball and attacking downhill.

The extent to which this is a problem depends on how you interpret Westbrook's purpose. If he's supposed to lighten Harden's workload, then he's failing. Harden's usage is lower with Westbrook on the court but in line with last year's league-leading mark.

Killing Westbrook for not reducing Harden's on-court responsibility verges on pointless. Chris Paul never spared him from this wear and tear. Harden has essentially followed the addition of his past two co-stars by upping or sustaining his usage in every season. The search for his functional reprieve is a myth. He will be the Rockets' lifeline no matter who's next to him.

Pairing him with Westbrook—and Paul—was more about navigating his time off the floor (and, yes, raising the team's ceiling).

Paul afforded the Rockets a certain luxury in those minutes. They outpaced opponents by 8.1 points per 100 possessions last year when he played without Harden. It was the same story in 2017-18.

Westbrook has provided no such safety net. Houston has a net rating of minus-14.8 points per 100 possessions when he's on the court without Harden. The sample isn't huge (291 possessions), and Eric Gordon's rut prior to his knee injury didn't help. Neither is a good excuse.

In an ideal world, Westbrook would be faring better on all levels. Next to Harden, he'd be hitting standstill threes at a career-best clip. He'd be finishing even more efficiently in transition. Even fewer of his attempts would come from mid-range, where he's shooting under 39 percent for a fourth consecutive season.

All that is secondary to Houston's struggles without Harden. If Westbrook isn't going to help it survive those minutes, this gamble will never pay off. His off-court friendship with Harden matters, but the Rockets were also banking on his staying power as Paul's junior—a younger, more durable star who would, at the very least, maintain the dynamic they had, if not improve it.

To this point, Westbrook has failed to match it.

The season is young enough, this pairing new enough, for the Rockets to keep waiting. They're finding wins as they are, and this was never going to be a pain-free marriage. Things might get better with more reps. They may get worse. Perhaps they'll stay the same. The Rockets can't be sure.

With Westbrook, they can't yet be sure of anything.

Unless otherwise noted, stats courtesy of NBA.com, Basketball Reference or Cleaning the Glass. Salary and cap-hold information via Basketball Insiders, RealGM and Spotrac.