There was a play in the third quarter of the Ravens' convincing 37-20 victory over the Patriots on Sunday that felt like a glimpse into the NFL's future.

Ravens quarterback Lamar Jackson dropped back and was almost immediately surrounded by three Patriots linebackers. Not one. Not two. But three. He dipped, he swayed, and he rolled, and then he bounced to the outside, bursting up the left sideline. He turned what seemed like a certain loss into a sizable gain.

It was a play like countless others we've seen from Jackson this season. But maybe more than any, especially considering the opponent, it showed how he can be so many things in one.

He's a problem. He's an enigma. He's the 22nd century, a superstar who doesn't just run like the wind but is the wind.

He's a starship, and he made the formidable Patriots defense look like a steamship. He beat the best defense in football, commanded by the best coach ever, who schemed and plotted to stop Jackson and came up with air.

And he's a clear MVP candidate. This game firmly planted him in that discussion, along with Panthers running back Christian McCaffrey, Seahawks quarterback Russell Wilson and Texans quarterback Deshaun Watson. 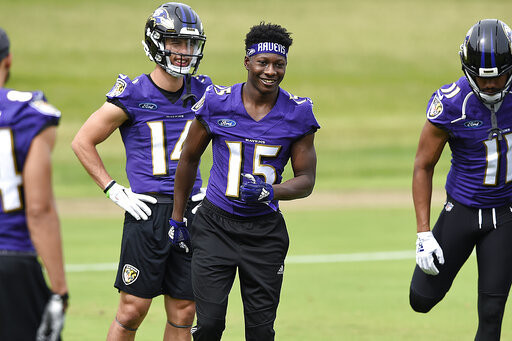 But this game also meant something else. When you beat Bill Belichick in a big game, it's almost like a graduation. Belichick is the godfather, and one of his calling cards is taking away a team's best weapon. In this case, that was obviously Jackson.

But Jackson wasn't slowed. He was energized. Jackson finished 17-of-23 for 163 passing yards and one passing score. He ran for 61 yards and two touchdowns. His running and passing are a combination of elegance and fury, interchanging effortlessly between the two, which both confused and infuriated the Patriots.

What Jackson and the Ravens did to the Patriots was staggering. In Weeks 1 through 8, opponents were averaging just under eight points, 234 total yards and 85 rushing yards against them and converting 16 percent of third downs.

The Ravens flipped all of those stats on their head. Baltimore scored 37 points, had 372 total yards, 210 rushing yards and converted five of 10 third downs.

The way you beat this brutal Patriots defense is to diversify your offense, and that's what the Ravens did. Jackson was a multi-angle threat, running back Mark Ingram was a bulldozer, and Baltimore attacked a skilled Patriots secondary with fast receivers on the outside.

As formidable as the Patriots are this season (and always), the Ravens actually matched up well with them on both sides of the football.

That perfect alchemy pushed Baltimore to a 10-0 first-quarter lead, and Ingram's 53-yard run to the New England 12 capped a stunning opening. Ingram had seven carries for 92 yards with 14 minutes left in the first half. The score ballooned to 17-0. Those 17 points were the most allowed by the Patriots in an entire game all year.

Remember, this is the best defense in football.

It was so unusual to see the Patriots get physically and mentally dominated that linebacker Dont'a Hightower erupted on the sideline at his teammates.

Hightower was really screaming at his defense to wake up. https://t.co/0uPZ6VBC38

It all looked gloomy for the Patriots, but there would be the inevitable comeback. There's a rule when it comes to playing the Patriots: When you have them down, you must nuke them. It's the only way to be sure.

The Falcons discovered this in Super Bowl LI when the Patriots overcame a 25-point deficit to win. That same coolness Brady displayed in the Super Bowl was again evident, and the Patriots defense forced an Ingram fumble. Before you could say "if you come at the king, you best not miss," it was 17-13 at the half. Then, 24-20 in the third quarter.

But unlike against the Falcons, the Patriots couldn't finish the job. Because of Jackson. He again asserted himself, took over the game (again), and with a five-yard touchdown pass to Nick Boyle and a one-yard TD run in the fourth quarter, he took a seat toward the front of the room in the MVP race.

There's no question now. Jackson isn't just a star. He's his own galaxy.