A.J. Green should never play another down for the Cincinnati Bengals. Neither he nor the organization would benefit from the wide receiver's return to the lineup. A trade would benefit both parties.

Cincinnati is well on its way to owning a top pick in the 2020 NFL draft. After losing 27-3 Monday to the Mason Rudolph-led Pittsburgh Steelers, the Bengals entered another level of disappointment as one of the league's four 0-4 squads. The race for the No. 1 overall pick will be frighteningly awful yet "competitive."

The Bengals aren't tanking, like the Miami Dolphins, but it sure feels that way.

Monday's meeting of winless teams was a chance to provide hope. Each had a puncher's chance despite a disappointing start. A victory would place the winner one game behind the 2-2 Cleveland Browns and Baltimore Ravens in the AFC North.

The Steelers made the Bengals look like a junior varsity squad. The Cincinnati offensive front operated in sieve-like fashion, allowing eight sacks and 12 quarterback hits. The offense managed a meager 175 yards. The defense, meanwhile, allowed Mason Rudolph to complete 24 of 28 passes for 229 yards and two touchdowns in his second-ever start.

There's no coming back from this point. The Bengals' season entered lost territory, and the organization's best player resides in limbo. 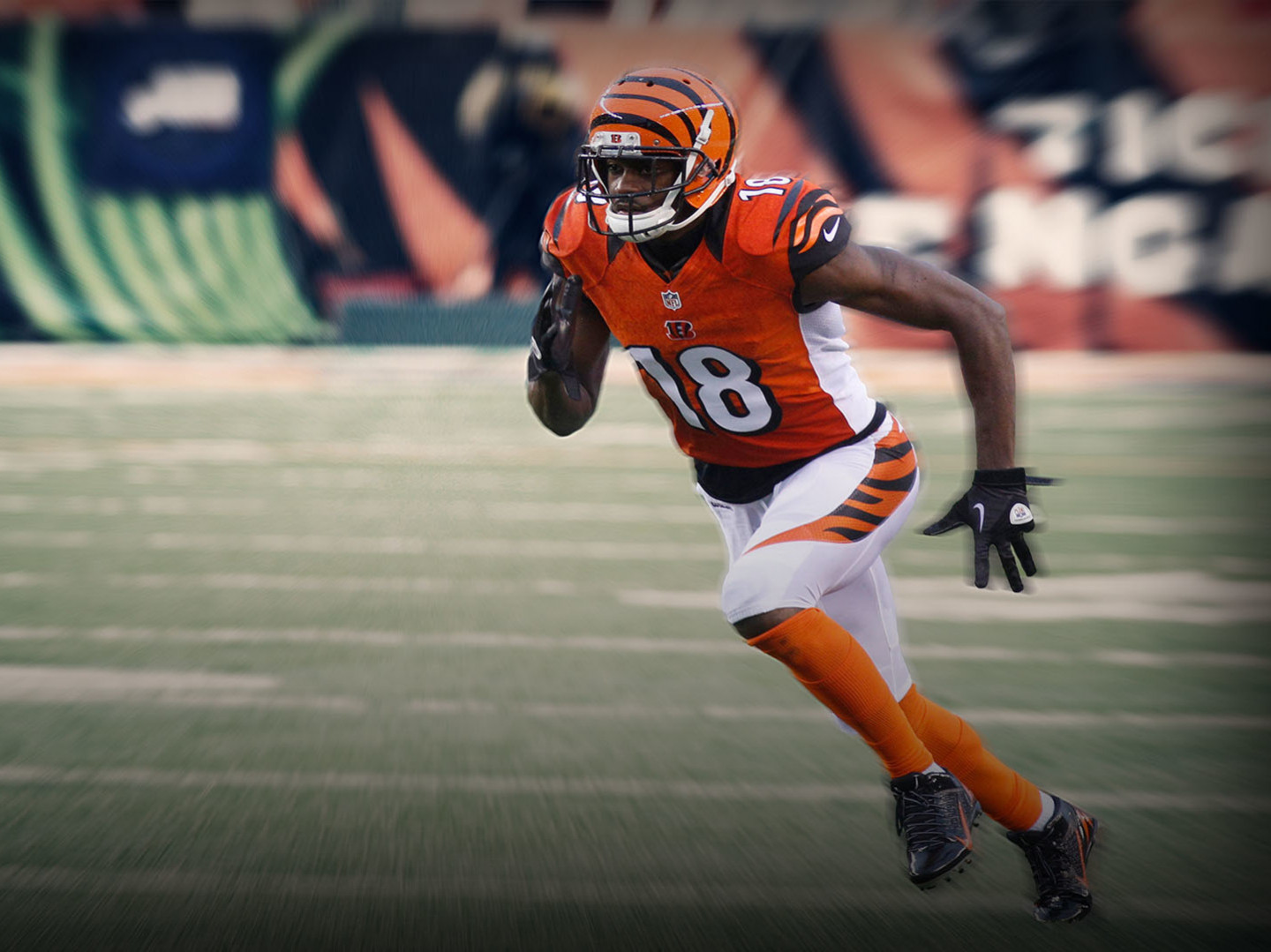 According to ESPN's Adam Schefter, Green "could be out a while" after missing Monday's contest, though he worked out prior to the blowout loss and will undergo a checkup late this week, per NFL Network's Tom Pelissero:

Green continues to deal with the aftereffects of preseason ankle surgery, and he should be in no rush to come back.

"He's certainly turned in the right direction," head coach Zac Taylor said last week, per the Cincinnati Enquirer's John Fay. "I don't want to give any timeline⁠—next week, the week after, week after that. I don't want to get into that stuff.

"It will be exciting when we get him back."

Will it, Coach? The season isn't exactly trending in the right direction. Maybe the seven-time Pro Bowl selection comes down with a case of the "blue flu" to avoid a disastrous situation.

Conversely, the Bengals should be eager to trade Green. Of course, he makes the team better, but his addition won't turn around the season. If he's retained, the Bengals will absorb his $15.2 million salary-cap hit this year before he becomes a free agent in the offseason.

"Stuff is happening," Green said earlier in September about his contract, per ESPN's Ben Baby. "But we're trying to get healthy and make sure I'm fine to where I can go out there and play. I don't really get into all that. I let my agent handle all that other stuff."

Run away, A.J. Run as fast and far away as you possibly can on your injured ankle. There's not a single reason why you should re-sign with Cincinnati when a plethora—yes, he'll have a plethora, Jefe—of contenders vie for your services.

The 31-year-old remains an elite target, though injuries have been problematic over the last two seasons. He's missed 11 games during that stretch.

The Cincinnati front office may be a little old-fashioned and smaller than any other around the league. However, the approach seems simple: Look at the possibility of a baseball-like trade. Acquire assets now before the high-profile star leaves once he hits free agency. The hometown Reds did the same thing with Yasiel Puig this year.

A half-season rental may not demand a large bounty, yet something is always better than nothing, especially with all the holes on the roster.

A reallocation of assets is absolutely necessary. Everything starts up front, with the NFL's worst offensive line. Cincinnati signed Andre Smith off the street to start at left tackle after Jonah Williams and Cordy Glenn suffered injuries. A rookie left guard, Michael Jordan, starts next to center Trey Hopkins. Right guard John Miller is in his first season with the team, and the retention of Bobby Hart as the starting right tackle has been a catastrophe.

On the other hand, the skill positions provide some hope. John Ross III and Tyler Boyd are talented, especially with Ross finally living up to his potential, though he left Monday's game with an injury. Running back Joe Mixon is a big-time player. There are offensive weapons who can excel even without Green, but the line and quarterback are holding everyone else back.

Green must escape the yoke of playing with Andy Dalton.

When your entire career is tethered to Andy Dalton https://t.co/hvzHzRldON

The opportunity to play with a top-flight quarterback will be tempting.

"Everything that we've done, we've experienced together," Dalton said of his relationship with Green, per Baby. "It's been fun to grow closer as friends over the years. Obviously, we've had a great working relationship, but then you put more to that."

Friendships last beyond football, as do championships. Green should be looking at the latter based on his circumstances.

Tyler Lockett's continued development makes him the Seahawks' No. 1, and rightly so. But Green is a true X receiver with the size (6'4", 210 lbs), route-running skills and body control to take over as Wilson's favored option.

Seattle also has an extra second-round pick from the Frank Clark trade to entice Cincinnati.

For Green, the Seahawks own the sixth-most projected 2020 salary-cap space at $80.5 million (the organization will also try to re-sign defensive end Jadeveon Clowney).

Davante Adams needs help in the worst way. Adams leads the 3-1 Packers with 36 targets after he amassed a whopping 169 last year.

Marquez Valdes-Scantling isn't a true No. 2 option, because Aaron Rodgers doesn't seem to trust him—which is vital in this scenario. Rodgers is still feeling his way through Matt LaFleur's scheme, and the offense is coming around, but the outside targets, sans Adams, don't consistently create.

The Packers don't have nearly the same financial flexibility as Seattle, but general manager Brian Gutekunst can certainly work with $23.1 million in projected cap space.

Any time a quality veteran becomes available or is believed to be available, the Patriots are tabbed as an option.

With Tom Brady, Green could be special opposite Josh Gordon with Julian Edelman working the slot. To make a deal happen, though, New England must find a way around Antonio Brown's grievances since he still accounts for $5.8 million in dead cap space, leaving the Patriots with $5.3 million in wiggle room.

A reworking of Green's deal as a stipulation in the event of a trade would make sense on two levels: The Patriots can get another Pro Bowl-caliber receiver on the roster, while Green would get an extension now instead of later.

If it's possible, the 4-0 Patriots will find a way to make it happen. They usually do.

Nine seasons with the Bengals is enough. They trended up with Green leading the way. His production and relationships with Dalton and previous head coach Marvin Lewis helped turn a league laughingstock into a multiyear playoff contender.

But that time is over. A new era is needed in Cincinnati, and a complete rebuild is necessary. The first step of a rebuild is the ridding of high-priced veterans who no longer carry the same value for far cheaper draft alternatives.

Green will go down as an all-time great Bengal, but it's time for him to move on, and the organization should be happy to oblige.