CHICAGO — Katie Lou Samuelson knew what kind of question was coming before it was asked. The four young men approached her after watching her workout on a court near her family's home in Orange County, California. If they knew her name, they didn't say it. Instead, one shouted, "Yo!" as they walked over. And then he asked: "Would you play my friend for $100? We have a bet to see if you could beat him."

Samuelson sighed. The truth was that part of her did want to say yes. She'd been the No. 1 recruit in her high school class. She'd been a four-year starter at UConn, the most successful college sports program this century. And just the week before, she'd been selected fourth overall in the WNBA draft. She believed she'd beat any of them easily. But she knew that the small satisfaction—a hundred bucks and bragging rights—wasn't worth the big risk.

Samuelson had left Storrs, Connecticut, with scars. She had broken her foot as a freshman, sprained her ankle so severely it required offseason surgery as a junior and injured her back a few weeks before the NCAA tournament as a senior. And she had also left Storrs without something she wanted desperately: a ring from a championship game she played in. So when the men pressed her for an explanation as to why she wouldn't play, she clapped back.

"I'm sure they assumed that I walked away because I thought I would have lost," she says now. "But I told them it would be a waste of my time. I have professional basketball to play."

Katie Lou Samuelson's first basketball objective was basic: She wanted to be better than her sisters. Their father, Jon, had played college basketball at Cal State Fullerton and professional basketball for a brief stint in Europe. Their mother, Karen, had made the All-England netball team. (Netball is based on basketball in its original form and played without a backboard.) They wanted their daughters to try other sports, but they soon discovered that only basketball would stick. So when Katie—the youngest—came along, she got to skip soccer and swimming and head straight for the hardwood.

Jon drove the girls to courts across the county at all hours of the day. They dribbled and defended and shot at churches and rec centers and colleges. Some days, they'd each put up a couple hundred shots in the predawn light before school. Some days, they'd do conditioning drills in the evenings after their teams' practices had ended. When they played two-on-two, it'd be Katie Lou and Jon against Bonnie and Karlie. And for a while, Katie Lou figured that was because her older sisters were that much better than her.

Then, when she was in middle school and playing for a club team composed of high school upperclassmen, her coach, Russ Davis, pulled her aside after a practice. Davis told her she could be better than Bonnie and Karlie. "Once I heard that, it was go time," she says. "Until that moment, I never thought about being better than them. But as soon as I heard that I could be better than them, I knew I had to be. I had to be the best."

Being the best in this family was no easy task. Bonnie left Stanford in 2015 with the third-most three-pointers made (237) in school history. Karlie eventually passed Bonnie with 249 career threes at the same school and joined the WNBA's Los Angeles Sparks. But Katie Lou separated herself starting in high school, leading Mater Dei to three straight Trinity League championships. At 6'3" and with a killer three-point shot, she was a positionless problem for any opposing defense. As a senior, she won the Naismith Trophy and was named National Player of the Year by Gatorade, McDonald's, USA Today and the Women's Basketball Coaches Association. And she surprised the recruiting world when she passed on the chance to play with Karlie at Stanford and committed to UConn.

Katie Lou Samuelson surprised many in college basketball when she chose not to join her sister Karlie at Stanford and instead opted to play at UConn.Uncredited/Associated Press/Associated Press

"I hated that people assumed I was going there," she says. "When people talked to me, they would say, 'Oh, you're just going to Stanford, right?' And I would be like, 'No, I'm not just going to go to Stanford.'"

She skipped her high school graduation to start summer practices in Storrs. And she soon learned what all Geno Auriemma's freshmen find out—that being the best in high school doesn't mean much at UConn. In practices, she battled with Breanna Stewart, Moriah Jefferson and Morgan Tuck, who were selected first, second and third, respectively, in the 2016 WNBA draft. And Auriemma learned that the best way to push her was by pissing her off. If she missed a shot, he announced she was done for the day. When she struggled, he wondered aloud if he'd recruited the wrong Samuelson sister.

"I have to admit it worked," Samuelson says. "After Coach would say something, I'd go through the next drill and hit every single shot. No matter what you do, he always won. If you did well, he won. If you did bad, he won. It was the worst."

To make it through that long fall, Samuelson and her roommate, Napheesa Collier (a forward with the Huskies at the time), made a rule never to talk about basketball outside of practices and games. Instead, they spent hours studying YouTube dance routines, like "Bet You Can't Do It Like Me." "I started playing better," Samuelson says, "when I started dancing."

Unfortunately for her, the music stopped in the Final Four.

When she felt the pop, Samuelson was relieved. She thought she'd cracked a knuckle. For a few weeks in the spring of 2016, as UConn was making a push toward its fourth straight national championship, Samuelson had been slowed by pain in her left foot. On the first play of her first Final Four game, against Oregon State, she felt that pop and then felt like she had a rock in her shoe. At halftime, she told teammate Gabby Williams that she'd either had the best knuckle pop of her life or she'd just broken her foot.

When the trainer put her MRI scan against the light, Katie Lou could see the crack right away. She hoped no one else would. When they did, she asked if she could play anyway. They told her she couldn't. But she didn't worry because even though she had become a starter and a critical component of the team, she was confident UConn would win the national championship without her. And when she climbed the ladder in her boot two days later, she was proud to have been proved right. "It wasn't crazy devastating," she says. "I assumed we would get back to another championship game."

The Final Four exit in her sophomore year hurt the most. The storyline all week in Dallas was a potential matchup between Katie Lou's Huskies and Karlie's Stanford Cardinal in the national championship game. Instead, Katie Lou watched from the stands as Karlie got hurt in Stanford's loss in the first semifinal to South Carolina; and then her UConn team suffered a painful overtime defeat at the hands of Mississippi State. The next day, her family was exploring the infamous grassy knoll when a UConn fan bus spotted Katie Lou and asked her to come on board and say hello. She got through "thank you" before bursting into tears.

In January of her junior year, she sprained her left ankle so severely that she eventually needed four screws in an offseason surgery. In March of her senior year, she collided with a Houston defender, causing her to miss the AAC tournament. In both seasons, the Huskies were again eliminated a game short of the national championship. She left UConn as a top-10 player in career points, scoring average, field goals made, three-pointers made and three-point percentage.

Though Samuelson left UConn having not been active for the national title the school won in her time there, she also left among the top 10 in Huskies history in points scored and three-pointers.Mike Ehrmann/Getty Images

She also left UConn in a hurry: The WNBA draft took place five days after the Huskies' elimination. (At the event, she even got a shoutout from Larry Bird, her favorite player, and the reason why she wears No. 33.) Selected fourth overall by the Chicago Sky, she had to miss her UConn graduation to attend training camp in Chicago. The lack of a layover has helped her compartmentalize the losses and focus on moving forward.

Samuelson's new coach in Chicago, James Wade, is also the team's general manager. He was brought in this offseason to instill a winning culture in a wayward franchise, and he drafted Samuelson a few picks higher than many experts predicted in part because of her near-misses on the national stage.

"She has a chip on her shoulder," Wade says. "The team that she first played with won four national championships, and she went against players who were drafted 1-2-3. Right away she had that pressure, and she dealt with it. They weren't able to win it, but they were a dominating team. It never knocked her off her stride. She was a winner. She was a competitor. She was a smart player. We knew we had to have her."

Before she left the greenroom on draft night, Samuelson got a call from Gabby Williams, her former teammate at UConn and the Sky's selection at No. 4 in the 2018 draft. They had been suitemates in Storrs, and they talked about what they'd get to do as roommates in Chicago—build puzzles and watch The Office on Williams' new big-screen TV. They also talked about wanting to win titles that they missed out on together at UConn. Williams had no doubt that Samuelson would be part of their new team's turnaround.

"Lou is as tough as they come," Williams says. "She played with her ankle on a string. She played with a broken back. She'll carry those losses with her. I still carry my two. But it won't derail her career. She'll win championships here and overseas."

Samuelson started training camp with the Sky the first week of May, and Wade liked what he saw right away. For her first three seasons in Connecticut, Samuelson was primarily known as a shooter. Her career three-point percentage (41.5) justified that reputation. But when the Huskies needed rebounding her senior year, she rose to the occasion and snagged 6.3 a game. Wade envisioned her playing either role in the pick-and-roll and fitting in anywhere from 2 to 4 on the floor.

"She gives us an added dimension we didn't have," Wade says. "I felt like if we had taken a player from another position, it would have been a position we had. It probably would have stunted the growth of that young player. In order for all our players to grow, including her, she was the best fit."

But shortly after practice started, Wade was concerned. "I coached her for 15 minutes," he says. "The second time I saw her, she had this big eye. I was like, 'She did not come to camp this way.' I asked her: 'What the hell happened to your face?'"

Before she'd even started sweating as a professional basketball player, Samuelson had defended teammate Diamond DeShields as she went in for a layup. On the play, Samuelson took DeShields' wrist—and her Fitbit—to the face. As Samuelson finished practicing, her eye grew big and black. Afterward, with pride, she took a selfie to show off her first battle wound as a professional player. For Katie Lou Samuelson, playing through pain is part of the game.

Charles returns with Team USA, but also to celebrate her UConn days

Charles returns with Team USA, but also to celebrate her UConn days 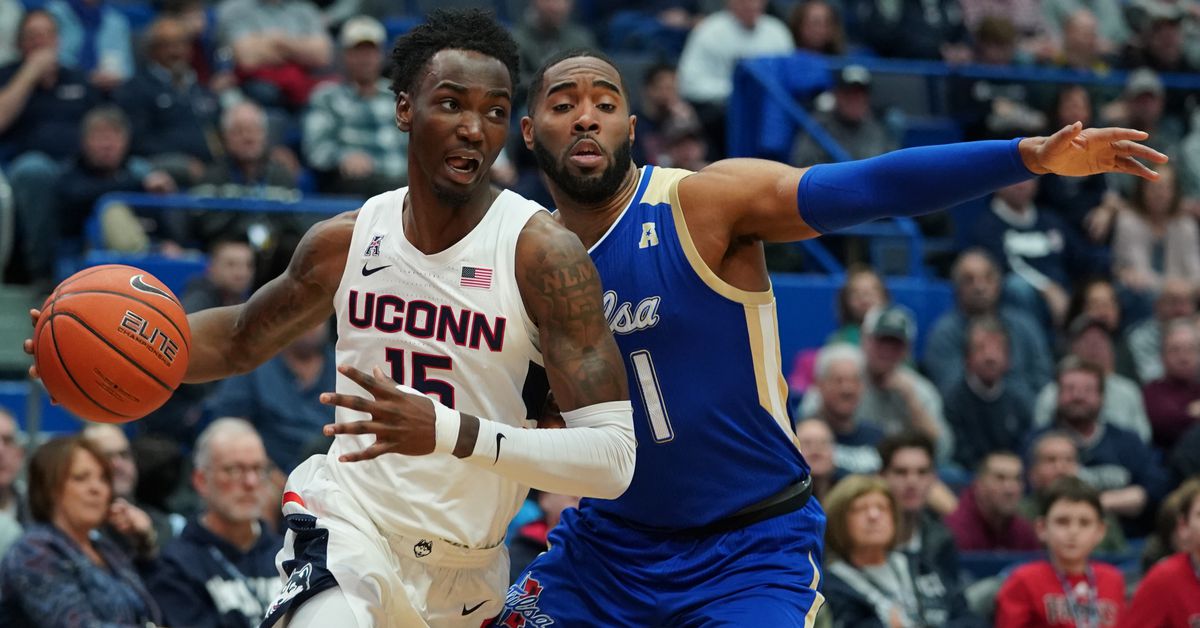