War of Will is becoming quite familiar with drawing the No. 1 post.

First, he drew that post in the Kentucky Derby, later moving to No. 2 with no horse in No. 1 as the field was cut down. He finished seventh in that race. Then, he had better results after again drawing the No. 1 post for Saturday's Preakness, taking the lead in the final quarter of the race and going on to win.

While there's no Triple Crown in play after Kentucky Derby winner Country House did not compete in the Preakness due to illness, there's a chance that War of Will notches back-to-back victories when he competes in the Belmont on June 8.

After the Preakness, trainer Mark Casse made it seem likely that War of Will will be competing in the Belmont.

"I'd say right now there's an extremely good shot we'll be there," Casse said, according to Ed McNamara of Newsday.

But like his past two races, War of Will is going to have some fierce competition with various other strong horses that are likely to join the Belmont field. Here's a look at three horses that could prevent War of Will from winning two-thirds of the Triple Crown races.

After not racing in the Preakness, Tacitus is expected to return to competition for the Belmont. He had a strong finish in the Derby, placing third, finishing behind only Country House and Code of Honor.

"We were very happy with Tacitus' effort in the Derby," Hall of Fame trainer Bill Mott told Horse Racing Nation. "We always suspected he'd do well at a mile and a quarter."

Tacitus moved through the field well during the Kentucky Derby, going from 16th at one point to being the fourth horse to cross the finish line. (He moved up to place third when Maximum Security was disqualified for interference.)

After finishing four spots ahead of War of Will in the Kentucky Derby, Tacitus will definitely be a horse to watch at the Belmont.

Although Everfast has only one win in 11 races, losing his last 10 in a row, a strong showing at the Preakness makes him a contender for the Belmont as well.

Everfast didn't arrive at Pimlico Race Course in Baltimore until Thursday as a late addition to the Preakness' 13-horse field. But he still made an impressive run, finishing second, only 1 ¼ lengths behind War of Will.

"We almost had it," said Joel Rosario, Everfast's jockey, per Newsday's Ed McNamara. "He ran great. We have a great shot at the Belmont."

If Everfast can again get to the front of the field in the Belmont, a strong surge at the finish could be enough to beat War of Will in a rematch.

It's not a certainty that Owendale will be in the Belmont field, as trainer Brad Cox told Newsday's Ed McNamara that he is being considered for the race.

But if Owendale competes, he should also be one of the favorites. He finished third at the Preakness, just getting edged by Everfast for second. Owendale finished one spot ahead of another Cox-trained horse, Warrior's Charge, which placed fourth.

Owendale has winning experience, as he notched a victory at the Lexington Stakes on April 13. If he runs just a little bit better at the Belmont than he did at the Preakness, then it's possible to see him winning the race. 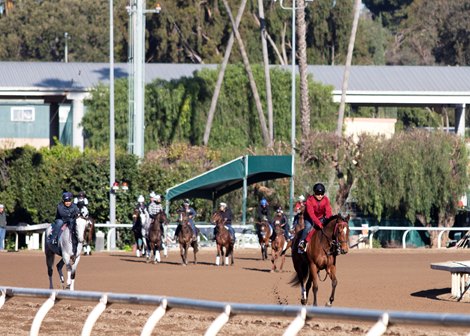