The 2019 NFL draft reached its conclusion Saturday. Three days and 254 picks have passed, and all 32 teams hope to be better for it.

But not every draft class is created equal. Some teams inevitably do better than others. While it's too early to accurately judge each class—that requires at least two or three years—teams can be graded for how they approached the draft.

Did a team address needs, add premier talent, maximize draft capital and avoid reaching? That constitutes a high initial post-draft grade, even if the players selected don't work out as expected.

Here you will find grades for all 32 teams, along with a closer look at some of the best classes of 2019—and one that should be questioned. First, though, we will examine the complete draft order and results. 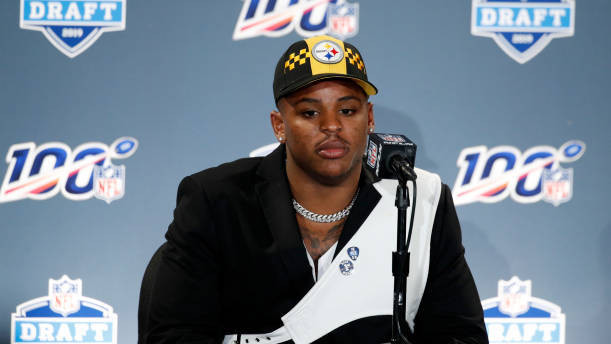 If examining the Arizona Cardinals' draft class in a vacuum, it's hard not to like what the team has done. Even with Arizona only getting a late second-rounder for 2018 first-round pick Josh Rosen, the draft was still a big win.

The Cardinals got themselves their quarterback of the future in Kyler Murray. They also got some weapons for the reigning Heisman winner in the form of receivers Andy Isabella, Hakeem Butler and KeeSean Johnson. This should give new head coach Kliff Kingsbury the tools he needs to run the offense he wants.

"Whether it was the plan or just value lining up right, it's a sign that the Cardinals didn't just hire Kingsbury, they truly believe in his offense and are willing to invest fully into it," Frank Schwab of Yahoo Sports wrote after the draft. "They're not doing this halfway."

This was not purely an offensive draft for Arizona, though. The Cardinals grabbed a probable Day 1 starter at the top of Round 2 in Byron Murphy. They also grabbed Deionte Thompson in Round 5, a guy with the tools to be a starting NFL safety sooner rather than later.

The Cardinals were bad last season. Really bad. Thanks to this draft, they should immediately be on the upswing.

The Houston Texans drafted for need over the first two days of the event. That's not necessarily a bad thing, but the Texans made a couple of big mistakes. They reached for players more than once, and they allowed themselves to be outmaneuvered early.

Houston needed offensive line help in the worst way. Quarterback Deshaun Watson was sacked an alarming 62 times in 2018, which is bad for any quarterback. For a quarterback coming off a torn ACL and with a propensity to take unnecessary hits? That's disastrous.

The Texans needed to land lineman who were ready to contribute right away, such as Washington State offensive tackle Andre Dillard. They got leapfrogged by the Philadelphia Eagles for Dillard in Round 1, however, and settled for Alabama State's Tytus Howard.

Texans getting jumped by Eagles for Andre Dillard is yet another reason why going into the Draft with such a glaring need is so problematic.

Howard has the potential to become a very good NFL player—he has as much upside as anyone in the draft. He's a bit of a project, though. As is second-round tackle Max Scharping of Northern Illinois.

These two may be perennial Pro Bowlers, but if Watson suffers another significant injury while they are learning on the job, it could derail all of the momentum the franchise generated in 2018.

Like the Cardinals, the Washington Redskins got their new franchise quarterback at the top of the draft. Though they originally considered moving up for Ohio State signal-caller Dwayne Haskins, the Redskins were able to sit back and land him at 15:

Jay Gruden said there was talk of the #Redskins moving up to get Dwayne Haskins but in the end they felt there weren’t enough teams that needed a QB so they could sit at 15 and let him come to them. They were correct.

Washington then moved back into the first round to grab Mississippi State's Montez Sweat, whom some considered the best pass-rusher in the draft.

Source with a team that took Montez Sweat off the board due to his heart condition detected at the Combine thinks Sweat is the best pass rusher in the class.

It only cost Washington the 46th overall pick and a 2020 second-rounder to grab Sweat.

The Redskins then went and got Haskins a familiar target in Ohio State wideout Terry McLaurin, added a potential starting running back—depending on the health of Derrius Guice—in Stanford's Bryce Love and a developmental receiver in Kelvin Harmon.

Washington has drafted a foundation for the future offense around Haskins, added a top-tier sack artist and did it all without overpaying or overdrafting.