The Yankees are just one win from their first World Series title since 2000. This calls for a live blog, no?

7:37 p.m. Coming to you live from the Brooklyn headquarters of River & Sunset , we begin our blog just in time for a Derek Jeter fluff piece on FOX. No word if Tim McCarver tried to destroy the master tapes prior to the telecast.

7:45 p.m. Anybody else notice how quickly DirectTV replaced the Chris Farley/David Spade spot with the Kim Basinger/Dana Carvey one? I guess having 408 stories in the press painting the company as disrespectful and Spade as a scumbag sellout will do that.

7:48 p.m. Was unaware Alanis Morissette was a Phillies fan. Scarlett Johansson must be a Yankees backer. (That was a People Magazine -like inside joke. I apologize.)

7:58 p.m. Just cut to a shot of an extremely loose Yankees dugout, which included an exuberant, as in wildly jumping up-and-down, Melky Cabrera. Should be noted that Melky tore a hamstring yesterday and has been taken off the roster. Weird.

8:03 p.m. Johnny Damon flares a single to center off Cliff Lee for the first Yankees hit. Doesn't it seem like the Yanks have had a lot of those this series?

8:09 p.m. A-Rod's making his hits count in this World Series, huh? His double in the right-field corner scores Damon all the way from first and the Yankees draw first blood. I have a good feeling about tonight.

8:10 p.m. Perhaps it's just jitters, but perhaps not. Cliff Lee doesn't look anything like the same guy from Game One.

8:11 p.m. Robbie Cano does what Robbie Cano does, which is fly out with runners in scoring position. Ugh. All in all a great first half inning. Lee had to work (20 pitches) and the Yanks are on the board.

8:14 p.m. Mike Francesa was unlistenable today with all his pontifications about why Burnett shouldn't be starting tonight, essentially stating that this was a give-away game for the Yankees. He is wrong, and Girardi is right. Whatever Burnett (or Pettitte, for that matter) are missing in rest is made up for in adrenaline. These boys are pumped up.

8:16 p.m. Shane Victorino squares to bunt with Rollins on first and gets drilled on the right hand. I'm sure A-Rod feels terrible. 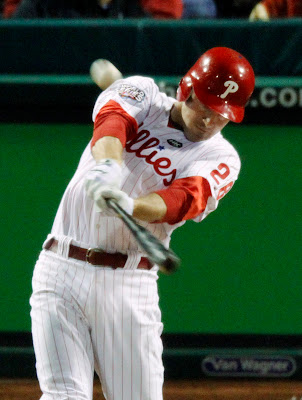 8:19 p.m. Uh oh. We may have gotten Evil A.J. tonight. Chase Utley unloads on a first-pitch fastball and suddenly it's 3-1. It didn't take long for me to remember how much I dislike Burnett.

8:25 p.m. For the record, Utley now has four homers and seven RBI in the World Series. That's Ruthian.

8:26 p.m. Man, Mark Teixeira is an amazing defensive player. He bails out Burnett by robbing Raul Ibanez with a beautiful backhanded dive. Still one out to go in the first.

8:35 p.m. The bottom of the Yankees lineup is positively Nats-esque tonight. Going to be a lot of outs among the Gardner/Molina/Burnett troika.

8:36 p.m. I'd be surprised if Victorino remains in this game. How could he not have broken a finger there? He looked extremely uncomfortable in the outfield before the inning started. Meanwhile, Burnett is blown away by Lee and we're off to the bottom of the second.

8:46 p.m. Good bounce-back inning by Burnett, working around a two-out walk to Rollins. Victorino was in serious pain after making contact on his inning-ending pop-up.

8:50 p.m. The top of the lineup has a huge task ahead of them tonight. There won't be any help coming from the bottom of the order, at least until Jorge Posada enters the game. The big boys need to step up. Tex, I'm looking at you.

8:56 p.m. Teixeira down to .063 in the World Series. This is a problem. Meanwhile, A-Rod skies out to center and Lee appears to be settling in.

9:04 p.m. A good throw there and Utley is out by a foot at second. Mr. Molina, you're not in the game for your offense, you know.

9:06 p.m. I'm going to go on the record and say I have a bad feeling about this inning. 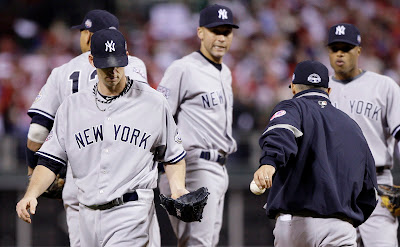 9:12 p.m. Back-to-back RBI singles by Jayson Werth and Ibanez and Burnett is history. All it took was three days to be reminded what a bust Burnett has been in New York.

He's either great or awful and there's no in between. That's not the trait of a top tier pitcher, which Burnett is paid to be. Anyway, Phillies busting it open at 5-1 and Joe Buck just wet himself with glee.

9:22 p.m. Good job by David Robertson minimizing the damage, but it's a 6-1 game with the best pitcher of the postseason on the mound for the Phillies. The odds, as they say, are not with your New York Yankees right now.

9:25 p.m. Back to Burnett for a second. Everyone—including the aforementioned Mike Francesa—is going to pile on Girardi for starting Burnett on short rest tonight, but they'll be wrong to.

9:27 p.m. Again, Joe Buck is positively ecstatic with how things are going tonight. Must. Fight. Urge. To. Murder.

9:28 p.m. Robbie Cano now 2-for-17 this World Series. He had 204 hits in the regular season. Don't worry: he'll resume hitting in April once the pressure is off.

9:37 p.m. Burnett said his Game Two start "was the most fun time he's had on a baseball field." Using that logic, we now got to see him have the least fun right? At least we get some history!

9:41 p.m. The redheaded guy with the beard from the Fios cable spot is in, like, 300 commercials right now.

9:43 p.m. Good news for people who like watching Major Leaguers that can actually hit. You have seen the last of Jose Molina this season. Posada pinch-hits, taking over the No. 8 spot in the lineup.

9:50 p.m. Teixeira continues gagging his way through the World Series, and the Yanks settle for one run. It's 6-2 heading into the bottom of the fifth. Tex now batting .059 against the Phils. Awesome.

9:55 p.m. Gritty, gutty Brett Gardner makes a beautiful running catch on a Werth drive and then nearly obliterates his soul against the left-center-field wall. Joe Buck, meanwhile, is annoyingly amused by Werth jogging around the bases after the putout. Joe Buck must be destroyed. 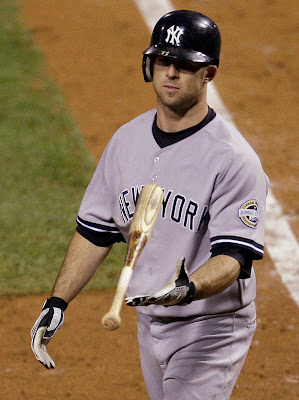 10:00 p.m. Cliff Lee is 41-0 when given a five-run lead, the numbers guys at FOX note. This seems like a good, meaningful stat until you realize that every pitcher has an incredible record when staked to a five-run lead.

10:06 p.m. Tough spot for Gardner here, asked to be productive after sitting on the bench for a month. But the guy is consistently overmatched by good pitching. The Yanks only have nine outs left.

10:12 p.m. Oh, Charlie Manuel, you don't know what Cole Hamels meant when he said he just wanted the season to be over? I'll tell you what it means: He's a bitch.

10:17 p.m. I'll tell you what: I made it through the first 23 seasons of American Idol without watching. I think I'm going to keep my iron man streak going strong in '10.

10:22 p.m. Zero hits from the bottom third of the Yankees lineup tonight. Expected, but still depressing.

10:30 p.m. FOX showing highlights of the 1950 World Series. Imagine a time when there was no center field camera for pitch-by-pitch coverage? And what was with all those random crowd cutaways of men and women in formal wear rising to their feet to cheer? Always found that odd.

10:34 p.m. Utley just tied Reggie Jackson for most homers in a World Series, icing the game with a solo shot off Phil Coke. 7-2. He now has five through five games. Somebody needs to back that dude off the freaking plate.

10:35 p.m. Ryan Howard makes some history of his own, tying a World Series record with his 12th strikeout. Willie Wilson fanned a dozen times in the 1980 Fall Classic.

10:41 p.m. Ibanez tees off on Coke and it's 8-2. I'm not certain Coke has a place on this team next year. Just not a very high talent level there. Anyway, he's done throwing BP and Girardi brings on former stud Phil Hughes. This has been an ugly night for the Yankees.

10:43 p.m. In the Silver Lining Dept., perhaps Hughes can still be salvaged for Game Six (or Seven) if he can use this outing to build some confidence.

10:50 p.m. We have a Mark Teixeira sighting. Tex doubles to left and the Yankees are on the verge of knocking Lee out of the game. A-Rod can at least make this interesting.

10:53 p.m. A-Rod ropes a two-run double off Ibanez's glove and it's 8-4. And now we send a special FU to Phil Coke for his hatchet-job last inning. Lee is done and the Yankees have a sliver of life. Remember, the Phillies have no discernible closer. I don't count the corpse of Brad Lidge.

10:59 p.m. Free ice cream sandwich to everyone reading if Cano gets a hit here.

11:01 p.m. It's so clear to me that Cano never wants any part of the moment, but I'll take the weak sacrifice fly. Smart baserunning by A-Rod, terrible throw by the defensive replacement Francisco in center. 8-5.

11:10 p.m. Good work by Hughes there, holding the Phillies scoreless and at least giving the Yankees a chance in the ninth. Like I said earlier, Hughes had a chance to get his 2009 season off the respirator tonight and he did it. It remains to be seen if Girardi has the gonads to bring him in in a big spot in the Bronx, though.

11:15 p.m. Posada rips a double off the top of the wall in right-center and the Yankees have a great start to the ninth. Now Matsui off the bench.

11:17 p.m. Matsui sharply singles to left and Derek Jeter comes to the plate with no outs representing the tying run. I'll say it again: the Yankees are going to miss Matsui. Godzilla has ice water in his veins.

11:27 p.m. Damon keeps it alive with a single, but Teixeira strikes out to end it. Too many Ks for Tex this postseason. The Phillies live to fight another day, while Girardi gets to hear for two straight days what a fool he is. Great.

11:29 p.m. Very odd to see A-Rod stranded at the on-deck circle there. As the old saying goes, it always comes down to A-Rod, and you got the feeling he was going to get his shot there.

Dan Hanzus writes the Yankees blog River & Sunset and can be reached via e-mail at dhanzus@gmail.com. Follow Dan on Twitter at danhanzus .