On Christmas morning, the Lakers were five games above .500 and LeBron James was right in the thick of the early MVP conversation. Of course, we didn't know then what we know now—that James would go down with a groin injury that day against the Warriors and ultimately miss the playoffs for the first time in 14 years.

Things went so sideways for the Lakers that it's hard to remember a time, not so long ago, when James was poised to carry yet another team with no other superstars to the postseason and—who knows?—maybe even a ninth straight NBA Finals.

Had James not gotten hurt and missed 18 games—and had the Lakers not imploded as a result, leading to James being shut down for what's left of the regular season—we'd be having an entirely different conversation. Instead of debating whether Giannis Antetokounmpo or James Harden is this season's MVP, we'd be asking ourselves how many more James is capable of winning.

And to take it a step further, how many he should have won over the years.

"As long as he put up the numbers [this season], you could've seen the anti-LeBron bias go the other way," one executive within the league told Bleacher Report. "If he didn't get hurt and got this Lakers team to the playoffs, he might have been the sentimental favorite. There might have been a desire on the part of the media to do right by him and make up for past wrongs." 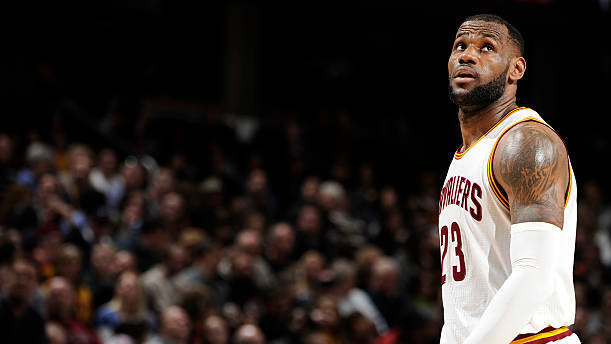 MVP snubs are nothing new for generational players. Michael Jordan won five and easily could have won five more. With four league MVPs and three Finals MVPs to his credit, James isn't hurting for notches on his belt as he ascends the sport's Mount Rushmore. But it's so odd for him not to be in the MVP conversation, it makes you think back on a few that got away.

"If the 'V' stands for valuable, you can make the case that LeBron is the most valuable player in the league every year, including this year," another team executive said. "He's so good that we take him for granted."

Looking back at the MVP votes he didn't win, James often has been judged against a different standard than most other players. It's a standard of his own making, but it's one that's hard to top from year to year when you're putting up numbers few in the game have ever produced.

In 2005-06, James logged a career-high 42.5 minutes per game and was third in the league in scoring behind Kobe Bryant and Allen Iverson with 31.4 points per game (also a career high) to go with 7.0 rebounds and 6.6 assists. He also led a team featuring the likes of Larry Hughes, Drew Gooden, Zydrunas Ilgauskas and Eric Snow (who averaged 4.8 points per game as the starting point guard) to a 50-win season.

Come awards season, though, Steve Nash was named MVP for the second year in a row after he paced the Suns to 54 victories and led the league in assists. With the juiced-up, free-flowing Suns offense—commonplace across the league now, but revolutionary at the time—Nash also led the league in wow factor. Rather than an anti-LeBron bias, the biggest factor working against LeBron that season was that Nash, the Suns and their electrifying style were mesmerizing and something the league hadn't seen before.

The following season, James led another ragtag bunch to 50 wins and a Finals appearance, but Dirk Nowitzki's 50-40-90 season and the Mavericks' franchise-record 67 wins overshadowed him. James, still seeking his first MVP at that point, ran into a different set of circumstances that wasn't so much a bias as a buzz saw. When the league's preeminent international star puts up historical numbers and leads his team to 67 wins—an achievement only six teams in league history have topped—that's tough to overcome.

In leading the Mavericks to 67 wins while producing one of the best shooting seasons in NBA history, Dirk Nowitzki made it difficult for LeBron James to capture the attention of MVP voters in 2006-07.Tony Gutierrez/Associated Press

While James may not have been the most dominant regular-season player that year—he received exactly zero first-place votes even though he averaged 27.3 points, 6.7 rebounds and 6.0 assists—he got the last laugh in the postseason (which doesn't factor into the MVP voting). Nowitzki and the Mavs lost to the Warriors in the first round, while James led the Cavaliers to their first-ever Finals appearance.

Payback came in 2008-09 and 2009-10 when James broke through with his first two MVPs. But when James decamped to Miami, his performances were met not just with the standard biases any great player faces, but also by an additional backlash over his departure from Cleveland as a free agent.

In his first season with the Heat, James averaged 26.7 points, 7.5 rebounds and 7.0 assists. He also led the league in advanced statistics such as win shares, value over replacement player, box plus-minus and player efficiency rating.

Yet he finished third in the MVP vote—garnering only four first-place votes—when voters (including myself) were mesmerized by a flashy new kid on the block, Derrick Rose. Dwight Howard finished second.

"It's called LeBron fatigue," a person in the league who knows James well told B/R. "It's like, 'OK, you're voting for Derrick Rose because it seemed more exciting when you knew in your heart LeBron was the MVP.'"

After bestowing James with two straight MVPs, voters had a natural tendency—one I can vouch for, in retrospect—to search for reasons not to vote for him again. Isn't there someone else? Oh, look, there's Rose leading the Bulls to 62 wins, the most since Jordan reigned supreme at the United Center. At 22, Rose became the youngest MVP in league history, as well as the seventh player (at the time) ever to average at least 25 points, 7.5 assists and 4.0 rebounds. That was a tough narrative for LeBron to overcome.

In truth, there was also something else at play: anger over James' clumsy journey from Cleveland to Miami via the ill-conceived TV fiasco known as "The Decision."

Once again, postseason outcomes gave James the last laugh (to an extent). The Heat beat the Bulls in five games in the Eastern Conference Finals before they lost to the Mavs in the Finals. In retrospect, however, the fact that the man almost everyone agrees is still—even at age 34—the NBA's best player won only two MVPs over his first seven years in the league (during which he was named to the All-NBA first or second team in every year but his rookie season) is laughable.

With the benefit of time (and two of the most ruthlessly efficient seasons of his career), James won back enough voters to take home the award in 2011-12 and 2012-13. And while the three aforementioned snubs may not ultimately detract from his reputation, they were nonetheless three notches in the legacy belt he can't get back.

James won the last of his four MVP trophies in 2013, but a case could be made he deserved an additional three awards.Lynne Sladky/Associated Press

At this stage of his career, it seems unlikely he'll catch Jordan in the championship chase. But if James had seven MVPs compared to Jordan's five? For those who keep track of such things, that's a game-changer.

It also makes you wonder whether we should be keeping track of such things, because every MVP vote is subjective.

While it's fair to note James easily could have amassed a few more MVPs in his illustrious career, is it also fair to wonder if his days as a perennial MVP candidate are coming to an end.

That depends on how you frame the question.

If you're questioning whether he's still capable of achieving that level, "LeBron would be offended by that," the person who knows James well told B/R.

If you're asking whether that should be the goal, that's a different—and better—question.

For the player who has defined an era by becoming an annual fixture in the NBA Finals for nearly a decade, dominating the regular season—and capturing the imagination of MVP voters—may be a somewhat meaningless pursuit for other mere mortals.

In the end, that may be one of the most interesting aspects of James' legacy: He was so good for so long, he rendered the MVP award obsolete.

Basketball Hall of Fame writer Harvey Araton joins Howard Beck to discuss Araton's new book about the evolution of the modern NBA, why Michael Jordan was a jerk in the best way possible and whether the Lakers should have shut LeBron James down early this season. All that and more on The Full 48.