Chicago Bulls swingman Zach LaVine won't play against the Dallas Mavericks on Monday night because of a left quad strain, the team announced.

Denzel Valentine, Chicago's 2016 14th overall pick, will slide into the starting five as a result.

Injuries have been regular for the 24-year-old throughout his career. He missed time last season with ankle and patellar injuries and played 47 games in 2016-17 and 24 games in 2017-18 because of a torn ACL.

When healthy, LaVine provides a reason for optimism in Chicago thanks to his offensive prowess. He averaged 23.7 points per game behind 37.4 percent shooting from three-point range last season and can attack the basket off the bounce or stretch opposing defenses with his perimeter stroke.

The Bulls have a number of talented young pieces in place with LaVine, Lauri Markkanen, Otto Porter Jr., Coby White and Wendell Carter Jr. and could become a contender in the Eastern Conference in future seasons if they all fulfill their potential.

With that in mind, caution may be the right approach with LaVine's latest setback as injuries have been an issue throughout the roster. The Bulls will have Porter for the first time since Nov. 6 against the Mavs, but head coach Jim Boylen disclosed earlier Monday that he will be limited to 16-to-20 minutes of action. The Bulls are still without Markkanen (pelvis): 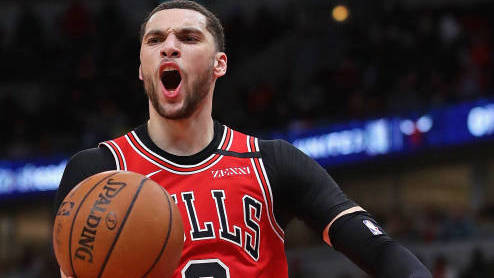 Lauri Markkanen (stress reaction in pelvis) is getting “close” to a return, Jim Boylen says. Markkanen practiced with Windy City today and it went well. Bulls expect him to travel with them to Minnesota for their game Wednesday, though his status hasn’t been determined yet.