One day after LeBron James surpassed Michael Jordan as the fourth-highest scorer in NBA history, the Los Angeles Lakers reportedly decided to preserve their 34-year-old All-Star for future seasons.

Chris B. Haynes of Yahoo Sports reported Thursday afternoon that the Lakers will put James on a minutes restriction for the rest of the season:

"I was told, now that the Lakers are almost out of playoff contention, that there was a conversation had between LeBron James' trainer and the front office. And they came to the conclusion that moving forward, LeBron James will play somewhere [between] 28 to 32 minutes [a game].

"And possibly on back-to-backs, depending on how LeBron James feels, that he might sit out one of those back-to-backs."

While James climbed higher in NBA history, the Lakers dropped their fourth game in a row and sixth in their past seventh games. At 30-35, L.A. is 6.5 games out of the final playoff spot in the Western Conference.

The Lakers have 17 regular-season games remaining, including three back-to-backs. 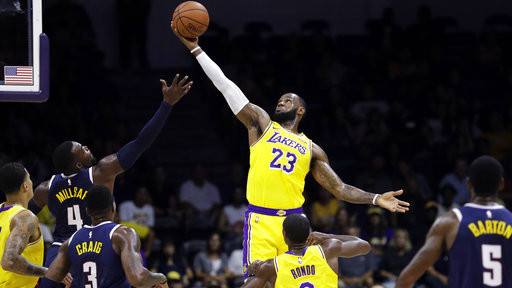 Haynes said James' agent, Rich Paul, is in agreement with what Haynes described as not necessarily a shutdown of James but a "cooldown."

On Wednesday, retired NBA player Caron Butler told TMZ that shutting James down for the remainder of this season would be "a sucker way out," but he said limited minutes could be an acceptable alternative.

With the playoffs looking like a pipe dream, the Lakers have seemingly shifted their focus to next season and beyond. Barring a miracle, this will be the first season since 2004-05 that James will miss the playoffs.

James has played in 239 postseason games—including eight consecutive NBA Finals—and his body has absorbed nearly 46,000 minutes worth of regular-season wear and tear over his 16-year career.

James missed 17 games throughout December and January after suffering a groin injury on Christmas Day, which was by far the most time he has missed due to an injury in his career. Prior to that stretch, James had played in 94 percent of possible games, according to Jeff Zillgitt of USA Today.

James' durability has helped to push him toward the top of numerous all-time NBA statistical leaderboards, but the Lakers are taking the long view by reducing his minutes moving forward.

While James' first Lakers season appears poised to end in disappointment, perhaps a long summer of rest will be best both for the franchise and its King.