In case you've missed the memo for the past few years, predictive analytics have taken over college basketball.

Many rely on KenPom.com, which former meteorologist Ken Pomeroy has up and running with stats dating back to 2002. But Pomeroy certainly isn't alone. There's also Sagarin, KPI, ESPN's BPI, Haslametrics, T-Rank and, doubtlessly, dozens of other efficiency-based and tempo-based rating systems.

Just in the past few months, these metrics have become much more important. Several states have legalized sports betting since last summer, and more could be on the way. Moreover, the NCAA switched from the RPI to the NET (NCAA Evaluation Tool), which has added a major scoring margin and efficiency component to the selection committee's team-sorting tool.

So, how good are these predictive analytics at actually forecasting what's going to happen in a given game, and can they be used to find an edge for bracket pools and/or betting throughout the upcoming 2019 NCAA tournament?

To answer that question, I looked back through the 638 games played in the second half of February, comparing KenPom predictions to gambling lines and the outcomes of those contests. Ideally, we would have used the full season, or even multiple seasons, to get a more complete data set. But two weeks—roughly 10 percent of the campaign—is a good sample size.

The conclusion: Using KenPom to pick games is only marginally more effective than flipping a coin. 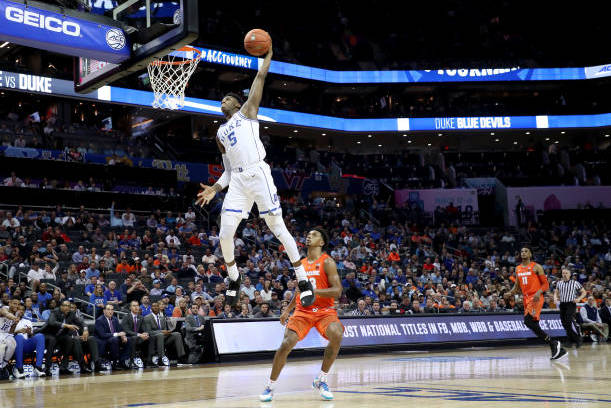 Before we go any further, be sure to note I make that statement as an avid consumer of KenPom. I spend more time perusing that site on a daily basis than most people spend on social media or email. It has fantastic elements for evaluating both players and teams, and I do believe you can find a gambling/bracket edge by digging into the numbers for each matchup.

One recent example was New Mexico State at UMKC on Feb. 28.

Both KenPom (seven points) and Vegas (eight) had New Mexico State as a single-digit favorite on the road. But one look at team rebounding percentages on KenPom—where NMSU is among the best on both ends while UMKC is one of the worst—and it becomes obvious the Aggies should be able to cover by winning in a blowout.

But in an exceedingly random sport which just seems to grow more unpredictable by the week, it's not surprising that the KenPom score projections are far from perfect.

KenPom did correctly project the winner 70.4 percent of the time during the final two weeks of February, but you don't need to spend upward of 16 years perfecting a predictive metric to know Gonzaga should beat Pacific and Pepperdine, or that Belmont is probably going to blow out SIU-Edwardsville.

And with the exception of the top four seeds in the opening round, most NCAA tournament games will have lines in those point ranges. Of the other 51 games in last year's Big Dance, 43 had a Vegas spread of 7.5 points or fewer, and 19 had a spread under four points.

One interesting discovery from this research project is that it might be a good idea to bet on the underdog when KenPom and Vegas disagree on the spread by two or more points. That only applies to about 30 percent of games, but the underdog either pushed, covered or won outright 64 percent of the time when KenPom's projected spread differed (in either direction) from the final Vegas line by at least two points.

Those differences can often be attributed to injuries. For instance, KenPom had Duke projected to beat Syracuse by 10*, but the Vegas line had Duke as just a five-point favorite with Zion Williamson out. It's next to impossible for predictive analytics to properly account for player absences, and given how often the underdog covers in those situations, it seems gamblers aren't any better at accounting for them.

*Oddly enough, that ended up being one of KenPom's most accurate projections during this two-week span. Duke won 75-65, which just barely missed the 77-67 projection.

To reiterate: better than flipping a coin, but not by much.

And if you consider that KenPom had both Loyola-Chicago and Kansas State projected to lose in the first round last year (not to mention UMBC), you would've immediately lost two Elite Eight teams and a Final Four team by just using its projections to fill out your bracket.

One last note on how KenPom fares at forecasting the scoring divide between two teams: Its projected scoring margin was exactly right 23 times (3.6 percent) and within five points in either direction 233 times (36.5 percent). But it also missed by at least 10 points for 248 games (38.9 percent) and missed the mark by at least 20 points on 52 occasions (8.2 percent).

What about over/unders, though? Surely a metric grounded in scoring efficiency and adjusted tempo does a fine job of projecting how many total points will be scored in a game, right?

The moral of the story is that an intelligent man gave up a career trying to predict the weather so he could dedicate more of his life to improving a model that projects the outcome of college basketball games. And after more than a decade-and-a-half, the score predictions still might as well include a shrug emoji.

That's no slight against Ken. Even with my degree in applied mathematics, I couldn't do any better. There's just no way to know what's going to happen in this chaotic sport, and we wouldn't have it any other way.

Kerry Miller covers men's college basketball and college football for Bleacher Report. You can follow him on Twitter, @kerrancejames.