Clemson obliterated Alabama to win the 2018 national championship, and the college football world is happily celebrating the Tigers' title while reflecting on another enjoyable season.

The countdown to the 2019 campaign starts now! As has become the norm, Alabama and Clemson will begin the season as the favorites. Which team will open atop the rankings, though?

Yes, plenty will change between now and then. There will be NFL draft declarations, transfers, injuries and even some coaching moves. Think of this Top 25 as an initial expectation/offseason hype list.

Alabama and Clemson atop the ranking? Shocking, right? Both programs return superstar quarterbacks in Tua Tagovailoa and Trevor Lawrence to highlight rosters full of elite talent. They deserve to be here. And if you prefer Clemson atop the list, great.

And this is where the "Rest of Y'all" bus begins.

Georgia fell a fourth quarter shy of returning to the College Football Playoff, and Ohio State has landed fifth in the final CFP poll for two straight seasons. No surprises with their inclusions.

Rounding out the top five is Texas. Once mainstays in the preseason top 10, the Longhorns last appeared there in 2010. Thanks to the 10-win season punctuated by a dismantling of Georgia, however, they will be the "biggest riser" of the summer.

The Longhorns are back—at least for eight months.

Oklahoma is the Big 12 champion for the fourth year in a row. You can debate whether the Sooners should be higher, but it's inarguable that they deserve this level of respect.

The big unknown right now is at the quarterback position. Kyler Murray will likely pursue a professional career, leaving Austin Kendall as the only experienced player with 5-star Spencer Rattler now on campus. Yet as long as Lincoln Riley is the coach, we're not doubting OU.

Notre Dame may be a divisive team following its CFP appearance. The Fighting Irish took advantage of their expected top competition having a bad 2018, but a senior-heavy defense plus quarterback Ian Book should keep them in the conversation.

Washington must reload on both sides of the ball, particularly the nation's 11th-ranked defense. If that process goes well, though, Georgia transfer Jacob Eason should provide an upgrade at quarterback and make UW a threat.

LSU and Michigan fit a similar mold with capable offenses and top-tier defenses. But the question is the same: Can they beat Alabama or Ohio State to truly contend?

Any number of outlets will highlight breakout teams for 2019. Get ready to see Nebraska, our No. 25 team, on every one.

Scott Frost began his tenure 0-6, dealing with a reshaped roster in a new system with a true freshman quarterback. Because patience in college football is like rain in Death Valley, talk of his $26 million buyout surfaced as the Cornhuskers struggled.

Then, wouldn't you know it, NU earned four victories in the last six games. Quarterback Adrian Martinez showed he's an ideal fit in Frost's offense and provided real hope for the future―something senior linebacker Luke Gifford alluded to after the season.

Senior Luke Gifford was emotional in the postgame room. Had tears in his eyes as he spoke about the future of the program. "I'm so happy for these guys. They're going to win a ton of games here." #Huskers

Even a No. 25 ranking is immense faith in a 4-8 team, especially considering Kentucky and Syracuse didn't make the cut. The Huskers must replace a 1,000-yard rusher and receiver, plus several key defenders, in an improving Big Ten West.

But this is another piece of evidence that benefit of the doubt won't be an issue entering Frost's second year.

During each of the last three seasons, the AP Top 25 has included West Virginia for at least seven weeks. The program had seven-plus appearances in five of Dana Holgorsen's eight years as head coach.

However, he left Morgantown to replace Major Applewhite at Houston, where the now-former WVU boss previously served as the offensive coordinator. Instead of seeing the Mountaineers in the Top 25, Holgo's new team is featured at 24.

Incoming coach Neal Brown has a lot to prove.

Fortunately for WVU, it may withstand the major departure of All-Big 12 quarterback Will Grier. The Jack Allison Hype Train is destined to come screaming down the tracks soon, and the defense returns a majority of its production. 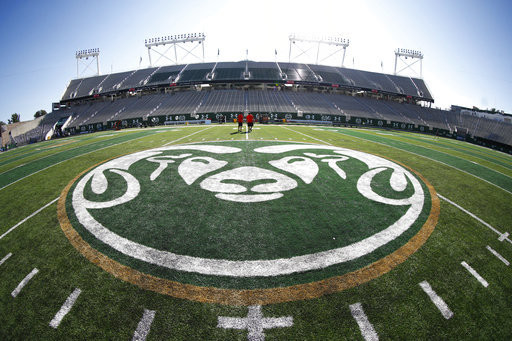