Pierre-Emerick Aubameyang's house had been burgled and his car stolen, but he was not going to let it spoil his evening.

It was April 20, 2013, and AS Saint-Etienne's players were in Paris preparing to fly home after beating Rennes 1-0 in the final of the Coupe de la Ligue. It was the club's first major honour since 1981, and the atmosphere was understandably joyous. Aubameyang did not want material concerns to poison his mood.

But this was not a case of an obscenely wealthy footballer blithely writing off an expensive asset in the knowledge it could easily be replaced. Aubameyang has a real passion for cars, and the one that had been taken from outside his home in Fraisses, southwest of Saint-Etienne, was his pride and joy.

The car was a soft-top Aston Martin DB9 Mansory in "crocodile-skin" green, customised with Aubameyang's squad number (No. 7) on the wheels and dashboard. He had lovingly shown it off in a video filmed for Saint-Etienne's YouTube channel earlier that season.

The car would be discovered by police later the following day in Saint-Etienne's southern suburbs, the only damage to it a flat tyre. Aubameyang was not to know that he would be reunited with it so swiftly, though, and for his team-mates, his reaction to the news of its theft was a mark of the man. 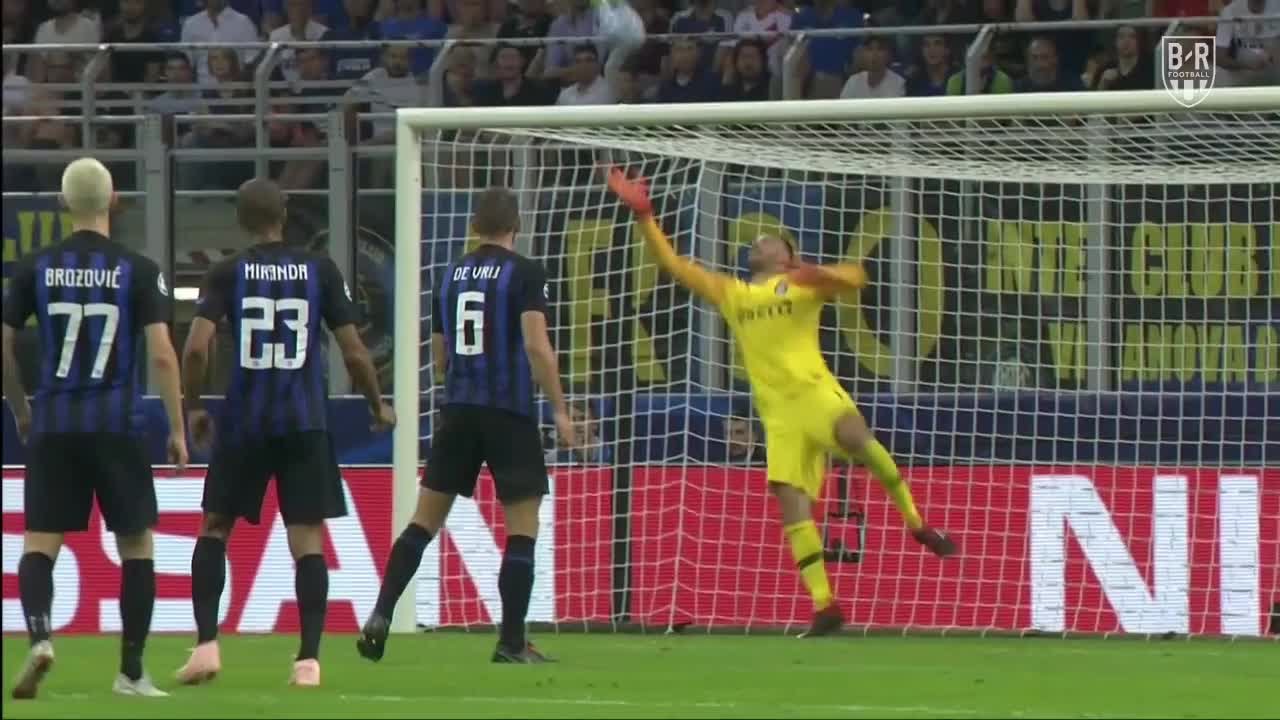 "Anyone would have been annoyed about that. But he was so happy we'd won that it didn't really affect him," former Saint-Etienne defender Jonathan Brison tells Bleacher Report. "It sums up his personality. It could have tarnished the evening, but it didn't affect him at all."

The 2013 Coupe de la Ligue success was the crowning moment of Aubameyang's time at Saint-Etienne and served as a perfect send-off ahead of his move to Borussia Dortmund that summer.

Five years on and having swapped Dortmund yellow for Arsenal red, he is recognised as one of the best attacking players in world football. But two-and-a-half years earlier, when he first set foot at Saint-Etienne, his future looked perilously uncertain.

Aubameyang was 21 when he joined Saint-Etienne on loan in January 2011, and his career appeared to be drifting.

He had been on the books at AC Milan—where his father, Pierre, worked as a scout—but never played a first-team game, and successive loan spells had been underwhelming. Although he scored 10 goals while on loan at Ligue 2 side Dijon in the 2008-09 season, the step up to the top tier had proved a challenge. He spent the 2009-10 campaign at Lille and the first half of the following season at Monaco, but he performed fitfully, scoring only two goals for each club.

"He'd already wandered around a lot, and it's never a good sign when a player changes club all the time," says Yves Verriere, who has spent 30 years reporting on Saint-Etienne for regional newspaper Le Progres. "When he arrived at Saint-Etienne, he wasn't a player with a big reputation."

Aubameyang's first half-season at Saint-Etienne offered only faint promise. Though lightning quick, he was felt to lack composure in opposition penalty areas. He scored two goals in 14 appearances, and the club's decision-makers harboured doubts about whether to extend his loan into the following campaign.

The summer 2011 was a turning point fo AubameyangAFP/Getty Images

The summer of 2011 would prove a turning point. In conversations with his father, who was a former professional player, and Saint-Etienne coach Christophe Galtier, Aubameyang came to appreciate the discipline and dedication required to make it at the highest level. He spent the summer training, and when the team reported back for pre-season, he looked a different player.

"After a chaotic first five months, we didn't know if he should stay with us or not," Galtier told L'Equipe in April 2017.

"But he showed real desire to stay—for example, spending all his holidays in Saint-Etienne. He wanted to do a full year at one club. I spoke to his dad a lot and I followed the advice of my presidents by giving him another chance. From the first day that he arrived at training, he wasn't the same man. He'd become a war machine."

Fabien Lemoine joined Saint-Etienne from Rennes in August 2011, a month after Les Verts had agreed to take Aubameyang on loan from Milan for another season, and he was struck by the forward's levels of application.

"He worked on his shooting every day, in front of goal, taking shots," Lemoine tells B/R. "He knew that in order to realise his ambitions of going much higher, there were things he needed to improve.

"When I arrived, he had a reputation for being very fast and for being more of a wide player. A player with a lot of energy, a hard worker, but in no way did I see him as a striker who could score loads of goals each season."

On the season's opening day, Aubameyang struck the winner for Saint-Etienne at Bordeaux. He scored at Sochaux and Rennes and then claimed another winner at Evian in October. By the time his brace had salvaged a 2-2 draw at Brest in early December, the club's directors had seen enough. Three days before Christmas, a full transfer was agreed and he signed a four-year contract.

Aubameyang missed a month of the season due to his involvement in the Africa Cup of Nations with joint-host nation Gabon in January. He squandered the decisive penalty as Gabon lost a shootout to Mali in the quarter-finals in Libreville and was led from the field in tears by his father, yet he quickly put the disappointment behind him.

A week after his penalty heartbreak, he netted the winner for Saint-Etienne at Toulouse. Later that month, he scored his first career hat-trick in a 4-2 win over Lorient. Having started the season on the flanks, he finished it as the team's main striker. A return of 18 goals from 38 appearances saw him named Saint-Etienne's Player of the Season.

In the changing room, Aubameyang struck up close friendships with fellow forwards Max-Alain Gradel and Bakary Sako and central midfielder Josuha Guilavogui. On the pitch, Saint-Etienne's compact shape and counter-attacking tactics fitted him to a T.

"We had a style of play that suited him perfectly," adds Lemoine, whose slide-rule passes from midfield regularly sent Aubameyang scampering into space behind opposition defences.

"Our game was based on winning the ball back and getting forward very quickly. We didn't even need to be super-precise with our passes in behind. He was so quick that we had a huge margin of error."

Happy off the pitch and increasingly effective on it, Aubameyang had drawn extra motivation from the arrival of his first child, Curtys, who partner Alysha Behague gave birth to on the eve of the season.

"One thing that clicked for me was my son, who was born in August 2011," Aubameyang told the club's YouTube channel. "It was extra motivation for me. Today I say to myself that I need to work so that he'll be OK tomorrow. When you have a child, you have responsibilities."

With 19 goals, he finished joint-second to Paris Saint-Germain's Zlatan Ibrahimovic in the Ligue 1 scoring charts and was awarded the Prix Marc-Vivien Foe as the league's outstanding African player. In addition to their Coupe de la Ligue triumph, Saint-Etienne finished fifth in Ligue 1, which was the club's joint-best placing since 1988.

In a 4-0 win over Brest in August, he scored two goals and had a hand in two more, momentarily leaving the pitch—Gareth Bale-style—as he motored down the left flank to tee up a goal for Romain Hamouma in the first half.

Against Bastia the following month, he leapt into the air at the near post to convert a cross from Brison with a stunning kung-fu volley. His clever backheel volley against Montpellier in February was voted Ligue 1's Goal of the Month.

French football fans were by now accustomed to Aubameyang's elaborate Mohican hairstyles and the somersaults he would perform after scoring, and he felt increasingly confident about giving vent to his creative impulses.

After scoring against Rennes in October, he celebrated by donning a Spider-Man mask in honour of former Saint-Etienne goalkeeper Jeremie Janot, who once wore a Spider-Man-inspired kit for a game against Istres in 2005.

When Saint-Etienne came out to warm up ahead of the derby against Lyon in December, Aubameyang was wearing a pair of customised Nike Vapor boots encrusted with 4,000 Swarovski crystals and worth €3,000. "You're a madman," Lemoine told him.

Aubameyang's team-mates often expressed surprise at his stylistic flights of fancy, such as when he turned up for a television appearance on Canal+ looking like a Michael Jackson tribute act, but there was respect behind the ribbing.

"He had this extroverted, extravagant side and I think that was a sign of his self-confidence," says Lemoine.

Aubameyang's signature performance came in an away game at future champions PSG in November 2012.

A year-and-a-half into the Qatari era, PSG boasted the likes of Ibrahimovic, Thiago Silva, Marco Verratti and Javier Pastore. To Aubameyang's dismay, Galtier put him on the bench, but after coming on in the 52nd minute, he forced Mamadou Sakho to put through his own net three minutes later and then coolly slotted in what proved to be the winning goal in a 2-1 victory.

"He [Galtier] put Aubameyang among the substitutes, and he didn't take it very well," Brison recalled. "Galtier spoke to him, and when Aubame went on, he was decisive. He could have sulked or just played for himself, but he went on and changed the game. The relationship was very good, and there was mutual trust between them. I think that deep down Aubame recognises that Christophe showed him a lot of trust. And he repaid him."

A tough-guy defender turned strongman coach, Galtier was the first manager to bring the best out of Aubameyang. The striker paid a glowing tribute to his former mentor when Galtier announced he would be leaving Saint-Etienne in May 2017, describing him on Instagram as "more than a coach."

The arrival of strapping Brazilian striker Brandao prior to the start of the 2012-13 season prompted Galtier (now in charge at Lille) to switch Aubameyang to the left flank of his 4-3-3, yet the pair formed a very effective partnership, with Brandao's strength and aerial prowess proving an ideal complement to Aubameyang's pace and finishing ability.

They combined to match-winning effect in the 18th minute of April's Coupe de la Ligue final against Rennes at Stade de France, Aubameyang crossing from the left with the outside of his right foot for Brandao to volley home from close range.

The goal brought Aubameyang the first trophy of his career. It would take more than a vanishing Aston Martin to take the gloss off that.

Aubameyang's enduring popularity with Saint-Etienne's fans could be gauged when he returned to Stade Geoffroy-Guichard for a charity match in April 2015.

By then, almost two seasons into his Dortmund career, he scored a hat-trick and received a rapturous reception from the home crowd, the stadium speaker barking "Pierre-Emerick…!" after each of his goals and the green-clad support roaring "AUBAMEYANG!" in reply. It was just like old times.

"He left very good memories here. Because he was at the origin of the club's rebirth," says Verriere.

"When he came to play in the FIFA Match Against Poverty, the welcome he got was crazy. The legends of Saint-Etienne are the players from '76 who got to the European Cup final, but among the more recent players, he's held in special esteem."

In the first three seasons of first-team football, Aubameyang averaged 0.16 goals per game. Since the beginning of that transformative second season at Saint-Etienne, that figure stands at 0.61. With Arsenal, he currently has the best minutes-per-goal statistics in the Premier League era.

At 29, Aubameyang still has a few seasons of top-level football ahead of him. Wherever he ends up and whatever he goes on to achieve, one thing is for certain: It all started for real at Saint-Etienne. 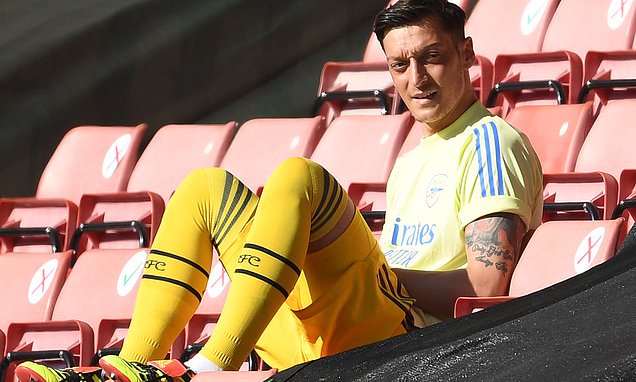 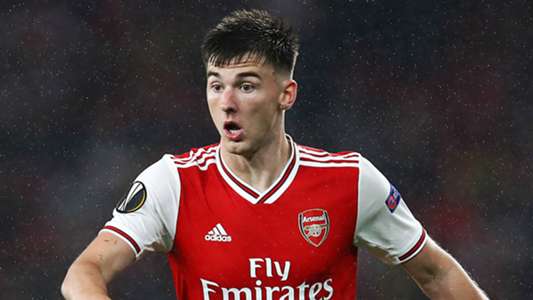