Jose Mourinho has referred to them as "untouchable" and Jurgen Klopp labelled them the "biggest force in English football," so how on earth do Manchester City improve their superteam?

As Premier League champions, they are this season's team to beat—and so far they have been almost faultless. From 12 league games, they have won 10 and drawn two, keeping them top of the table once again.

Worryingly for their rivals, star names are hitting top form all over the pitch. Sergio Aguero is top scorer with 11 goals, David Silva and Raheem Sterling both have seven, Riyad Mahrez has weighed in with six and Gabriel Jesus has notched five.

John Stones is being praised for some incredible performances at the back, Bernardo Silva is being hailed as one of the league's most creative players and goalkeeper Ederson has kept nine clean sheets from 16 matches.

For most teams, it would be a case of standing back and admiring the beauty. But this is a Pep Guardiola side—there is no chance of them standing still.

When we look toward players who could improve this City team, one of the first names that has to be discussed is Jadon Sancho. He was an academy player at the club from the age of 14 and emerged to become one of their brightest products. With so much competition and chances of first-team football being limited, though, he decided to move on in 2017.

Right now, City fans are looking at the 18-year-old's performances for Borussia Dortmund and England and wondering: Can we get this lad back?

Sancho is still in the early stages of his career, and if he continues to progress at such a rapid rate, there is no doubt offers will be coming from the most elite clubs.

When that time comes, City will have their chance to get him back on board. Sources assured Bleacher Report that the club have first option on him. It means that if anyone makes a successful bid to buy Sancho, City will get the chance to acquire him at the same price.

People close to the player insist he holds no grudge against the club and is open to a return. As a player who understands the demands of the club and has the confidence to hold his own among their superstars, it is viable that he could return.

The lesson Sancho learned at City, that it is so hard to break through, is one that others at the club are well aware of.

Phil Foden is the most high-profile English player trying to work his way into Guardiola's plans. They have resisted loaning him out, instead preferring him to learn from the star names at the Etihad Stadium. David Silva is said to have paid particularly close attention to helping the 18-year-old's development. Figures around the club are convinced his patience will pay off and it is only a matter of time before he becomes a significant first-team member.

City can attract pretty much any player in the world, but the way they really want to improve their squad is by producing their own talent.

On a broad basis, they already are. Their academy is one of the most impressive in England. But the message hammered home to City graduates is that they are trying to break into the most rounded, talented squad in the country—possibly even the world.

Being good is not enough: You have to be better than someone like David Silva, the best in his position on the planet.

It is a tough school, and even Kieran Trippier has had to move away from the club in the past to earn his chance at Premier League football.

And Brahim Diaz is another who has been earmarked for a part in Generation Pep, but this year is a test for him. Opportunities to play will come, but it is only over time that the 19-year-old will get his chances in the Premier League.

Links with Real Madrid continue to circulate around Diaz, but City are continuing talks over a new contract. They want him to make his name with them. That's the future they really want. That's what they want players to aspire to.

There are other names to look out for over the next year, too.

Goalkeeper Aro Muric is already part of the squad, regularly involved and looking capable of stepping in for Ederson. Two others are Claudio Gomes, 18, and Tommy Doyle, 17, who are further down the ladder but have huge prospects and a great chance of one day becoming part of City's superteam.

Of course, increased focus on pushing homegrown products into the first-team frame will still not deter City from the transfer market. Guardiola has such high standards that he needs players to completely understand and fulfil the role required of them in order to hit optimum levels of performance.

The club have recently been forced to defend themselves over accusations they tried to cheat European football's financial fair play rules, and they will stand by a stance to not become like Paris Saint-Germain and spend £200 million on a star name. You will not see a day soon when they blow that kind of money on Neymar or Kylian Mbappe.

Instead, their recruitment focuses on players who can fill specific roles and arrive at fees that are not totally out of sync with other clubs. Think Mahrez (£60 million), Aymeric Laporte (£58 million), Danilo (£26.5 million) and Ederson (£35 million)—all signed strategically, not for show.

They will continue to look for value in new talent but only in positions that will genuinely enhance their XI. One of those being spoken of most regularly is Ajax's Frenkie de Jong—and that is an intriguing idea.

A post from Opta explains how no player in Europe's top five leagues carries the ball toward goal more frequently than De Jong and that he completes 85 per cent of his passes in the final third—behind only Mousa Dembele, Toni Kroos, N'Golo Kante, Borja Valero, Sergi Roberto and Julian Draxler.

A trait that seems most fitting for City is that he has an ability to dribble out of defence that few others are able to match. He also has extreme assurance in his passing and has been touted as a good fit to replace Fernandinho.

Manchester City have blown other clubs out of the water and are close to sealing a £61m deal for Ajax midfielder Frenkie de Jong (21). Barcelona and Tottenham are believed to have accepted that De Jong is heading to the Etihad. [Sunday People] https://t.co/KOzP37UPL9

Scouts tell B/R that the link is one to take seriously, given his style of play and incredible confidence at the age of 21. However, they also insist there has to be caution when judging his statistics, given he is playing in the Eredivisie—a league in which it is easier to carry the ball long distances in central defensive positions.

Furthermore, B/R sources insist any reports of a deal being close for him to move to the Etihad are premature. The interest is real, but the club are not close enough to a deal to conclude that he will be their long-term answer in the centre of the park.

Manchester City are a team of our time, and Guardiola is showing that the work he did in Spain with Barcelona and in Germany with Bayern Munich can be transferred to the English game.

However, improving this current crop takes careful plotting and analysis. They will not gamble on big names or hype. Their next goal is for their own young players to make the grade. 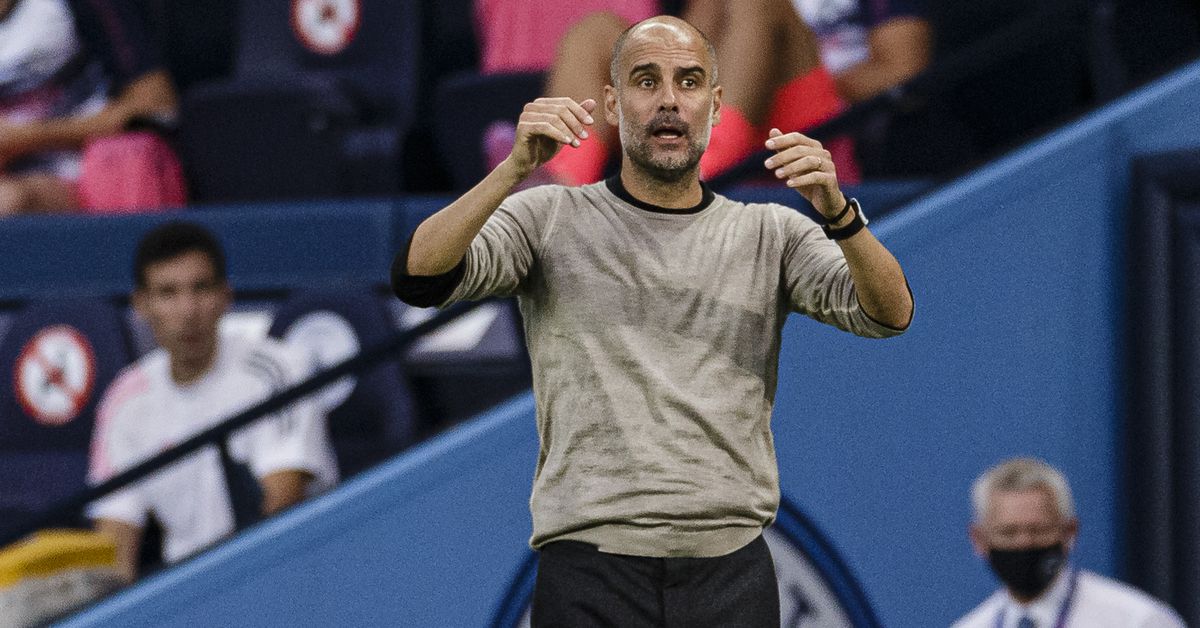 Petec21
via Bitter and Blue