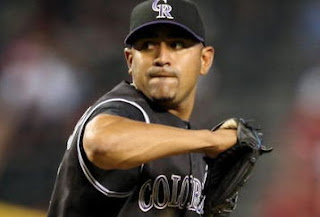 Yorvit Torrealba did his best to be the hero for the second night in a row, but the Colorado Rockies ended up losing in the 10th inning on a bases-loaded walk to Padres pinch-hitter Nick Hundley.

It seemed like it was going to happen again for the Rockies. Since Jim Tracy took over as manager of the Rockies in late May, it seems like the club is going to find a way to win baseball games. Saturday night it simply did not work out for them.

While the Rockies have been finding ways to win, their bats have not been doing the job.

It is difficult to find something negative about a team that lost their first game in nine days, and had won 11 out of 12, but the fact is, this team has been vastly underperforming at the plate.

In their 5-1 win over the Reds on Thursday, the Rockies scored in just one inning. All five runs came in the third inning, and all of the runs came with two outs.

On Friday, the Rockies were being shutout by the Padres on a day when their starting pitcher had never thrown more than four innings at a time in the big leagues. They went eight scoreless innings before magically coming through, again with two outs.

On Saturday, Colorado did not get their first run until the seventh inning when Troy Tulowitzki hit a long pop fly that landed in the first row of the left field seats. After that, they got the lone run in the ninth to send the game to extra innings.

While in the four games given as an example the Rockies went 3-1, it could have easily gone the other way.

On Thursday afternoon at Coors Field if Reds pitcher Kip Wells had simply found a way to get one more out instead of giving up a couple of walks and a big double to Jason Giambi, the Rockies would have not scored, and the Reds would have been on top.

On Friday if Heath Bell had thrown a slider to Torrealba instead of a fastball, the Padres could have walked away with the win.

“What if’s” are a huge part of sports, but the fact is, they are “what if’s” because they never happened. The fact is, the Rockies came out on top of those games and gained ground in the National League Wild Card race. A win on Saturday night, however, would have all but ensured at least a Wild Card berth for the Rockies.

With the Dodgers trouncing of the Giants once again at AT&T Park in San Francisco, the Rockies remain 5-1/2 games up on both the Giants and the Marlins in the Wild Card race, a lead that is not impossible to come back from, but would take quite the run by either one of those teams, and a Mets-like falling apart on the part of the Rockies.

The Rockies, however, can only do their part. They need to continue to find ways to win games and take as many wins away from teams they are superior to as they can. The Rockies by no means have an easy schedule down the home stretch.

They play three more games in both San Francisco and Los Angeles and they play three games at home against the NL-best Cardinals, along with three games against a formidable Brewers team. To say that the Rockies have an easy schedule down the stretch would be incorrect.

If the Rockies can win on Sunday against the Padres, they will ensure themselves of at least a 5-1/2 game cushion over the Giants heading into that three-game series.

That will mean that if the Rockies can get at least one of those games, they will head out of the Bay Area with a 4-1/2 game lead, with the Giants heading back to Los Angeles to face a Dodger team that they have struggled with this year.