Truly I am so sick of hearing this whole Jorts thing. But, I was reminded of it today again by a friend of a friend. I have wondered for sometime how this saying came about....especially since I think Gator fans can really dress going to games....but, here is what I found out and I wanted to share it.

Somewhere in what was once known as Alltel Stadium, some Georgia grad Kevin Davis came up with this idea. I guess he will forever be proud of himself. He was aggravated by some Gator fan and off the cuff shouted out, "Gators Wear Jean Shorts."

After some investigation into this term I have found that he is a Florida Attorney living in Tampa Florida. He is truly the founder of this awful chant..."Gators Wear Jean Jorts." Or "GWJS" or "Jorts."

I personally first heard of it from an ex-boyfriend at the time who sent me a you tube video of this kid playing around the house chanting and singing "Gators Wear Jean Shorts" and actually being encouraged by his parents in the background. How awful and silly of this kids' parents to spend valuable time teaching this junk rather than teaching him his abc's.

I was very surprised today to find out that people from the north or from the west for that matter now know about this chant....that they knew about this depiction of the Florida Gator dress code for games in The Swamp. To my surprise it's all the way in Buffalo. And...he was a Buckeye fan.

On a side note I am also surprised to know some of that there are still some Buckeye fans left considering there showing in last two title games....anyway

I have heard and read that Georgia and Alabama fans can dress much better than we Florida fans..... But, I submit to you that I have been to games and Sanford Stadium in Athens and Bryant-Denny Stadium in Alabama.....and they for the most part don't dress any better than we do.

Now, I must admit when I go to our home games I am always looking around to see who has on what. And, while I do see some denim short and tee shirt combinations....I see a lot more dress like me....you know khaki shorts and of course a gator shirt.

"Supposedly all Dawg Fans come to the games in their dressy casual attire. the ladies wear dresses and the men wear khakis, and button-down oxfords. And, with Alabama fans the men wear blazers, and women wear sundresses with houndstooth caps." I must admit I do like the Tide women in the Bear Bryant hats. But,that fashion is not worn by all women at Bryant Denny. I have seen many fashion faux pas at game time.

And, I hear that game day at Ole Miss "looks like a J.Crew catalogue shoot with pimento cheese sandwiches. (Whatever in Mississippi...I don't think so) Also, the contention is Florida has no dress code and violate all sensible fashion standards.

I'd just like to say, "in the circles that I run that we all painstaking put a lot into our Gator attire and make that we are looking our best....100 degree weather or not."

Anyway..."in 1997, when a Florida fan wearing jorts and an jersey kept Gator-chomping and screaming "Gator bait" at Davis and his friends outside of the stadium, Davis couldn't take it anymore. With no recent Georgia victory to reference, Davis began yelling, "Gators wear jean shorts!" The rest of the young Georgia fans -- most of whom were in elementary school the last time Georgia beat Florida -- joined him. By the time Davis entered the stadium, hundreds of Bulldogs had joined in the chorus. Georgia won that day for the first and only time in the 12 seasons that Steve Spurrier coached the Gators, and GWJS was seared into the heart and minds of every Bulldog under 25."

So the GWJS has been passed on to another generation now. And, if you are 36 and under and not a Gator fan you really like this saying.

Even ESPN has chimed in....."writing from the opening ceremony at the Olympics in 2008, ESPN.com's Pat Forde was quoted as saying I noticed something rotten from the state of Denmark. "Jean shorts. JEAN SHORTS?! This isn't Gainesville, Fla.; this is the Olympics," Forde wrote." Real funny Pat Forde....ha ha.

I have read that Davis has to be careful to take ownership of this saying and who he tells about his creation since he resides in the heart of Gator Nation.... he is surrounded by Gators. I have read that some sign his paycheck.

Davis was quoted as saying, "there's only one problem." It's like saying you slept with Jennifer Aniston, nobody believes it."

"But it's true. Georgia grad Corey Bailey, the proprietor of gatorswearjeanshorts.net, has confirmed that Davis, his fraternity brother, is the man responsible for leading the fight against jorts. Unfortunately, Davis said, Florida fans have not been shamed into tossing their denim. "Now, I think they wear it with pride," he said."

I personally will make a serious effort to stop looking around the "Swamp" the next time I am there.

We should make a mockery of the mockery made of us. We are winning titles left and right so why let fans from other schools dictate. We are a premier program now and in the national hunt year in and year out.

My circle of cousins and friends have committed to doing just that.  That is wearing some cute denim shorts and really making the SEC and the those Dawgs upset.

I predict in 2009 the Gators will be wearing more jean shorts if I can help it. And, I am sure more winning in the SEC will come along with it.

No drop-off at receiver for Florida in 2020, Hammond says 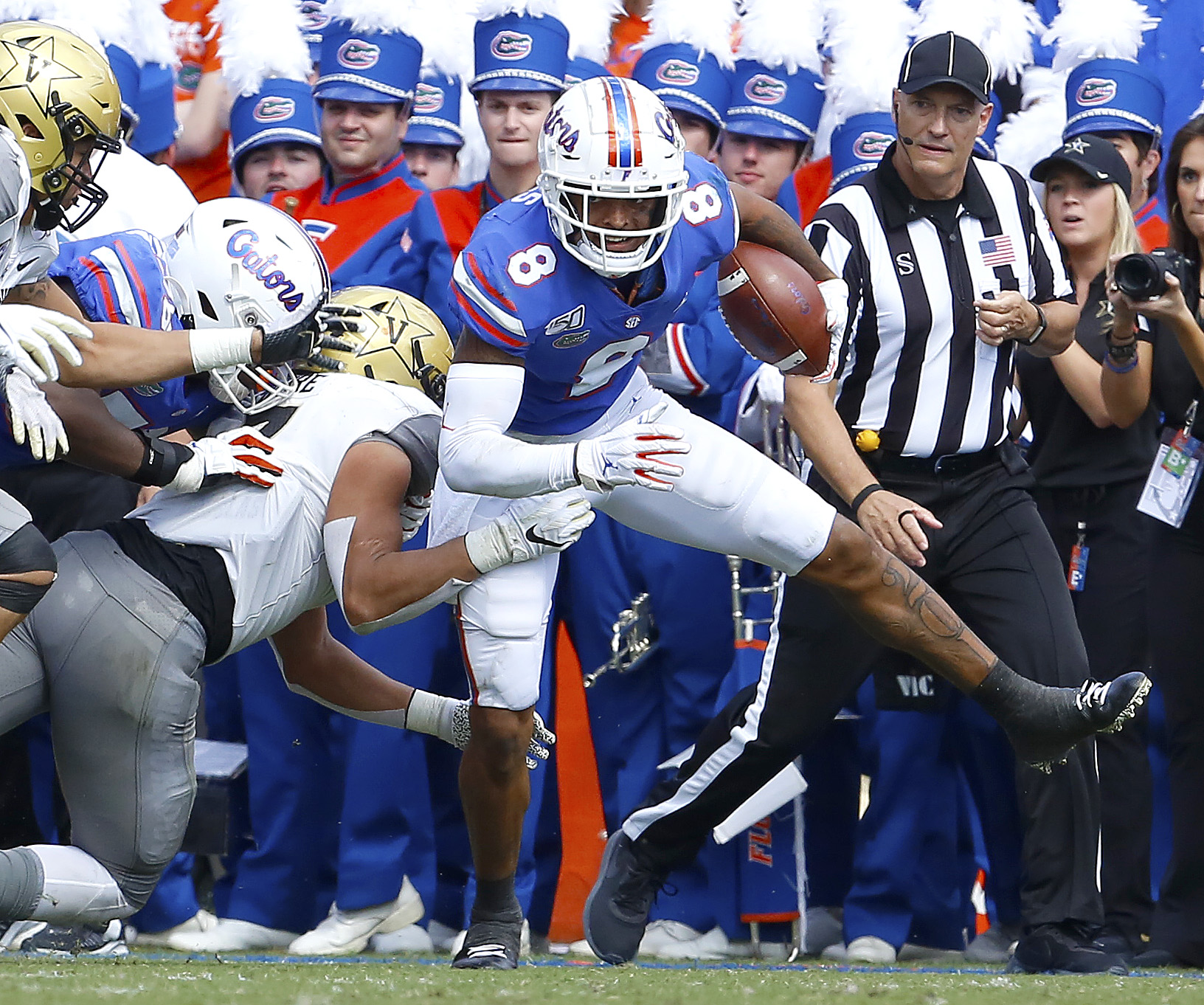 No drop-off at receiver for Florida in 2020, Hammond says