The Philadelphia Phillies made their first appearance in the World Series in 1915, when they challenged a talented Boston Red Sox squad.

The Phillies came in to their first Fall Classic as the clear underdogs, as Boston was already familiar with post season play.

Featuring pitcher Cleveland%20Alexander">Grover Cleveland Alexander and power hitter Gavy Craveth, the Phillies would face a stiff test in the Red Sox, who were loaded with so much talent that young pitcher Babe Ruth who only made one appearance in the Series, as a pinch hitter.

We start our phlashback with a look at game one of the 1915 World Series, played in Philadelphia.

The Phillies were awarded home field advantage by winning a coin flip. Phillies owner William F. Baker opted to host the first two games of the World Series in the Baker Bowl, which seated about 20,000 fans.

The Red Sox organization had requested 400 tickets in addition to the 200 that were normally allotted for visiting teams. Baker refused to give more tickets to the Red Sox fans that would come to Philadelphia, but the National Commission, the predecessor to the commissioner of baseball's current office and title, chose to settle the dispute between the teams by offering some tickets from their allotment. 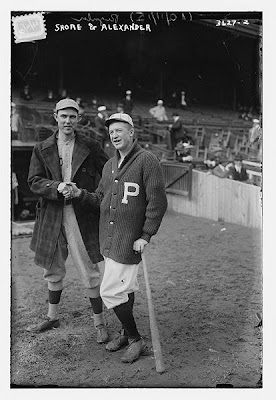 Grover Cleveland Alexander (seen pictured with Boston starter Ernie Shore) took the mound for the Phillies in game one. He was the ace of the Phillies, so it was only fitting that manager Pat Moran would hand Alexander the ball. The Hall of Fame pitcher came through with a brilliant performance.

After Boston right fielder Harry Hooper lead off the game with a single and moved to second on a sacrifice bunt, Alexander got out of the inning unscathed. He would not allow a run to score until the eighth inning when a Duffy Lewis single scored center fielder Tris Speaker, who had walked earlier in the inning. It was the only run allowed by Alexander, giving the Phillies the edge.

Leadoff hitter and third baseman Milt Stock drew a one-out walk in the bottom of the eighth. Stock advanced to second on a single by Dave Bancroft. Paskert then walked to load the bases. Stock would then score on a ground out by Gavy Cravath and Bancroft would score on a single by Fred Luderus to give the Phillies a 3-1 lead.

The most notable at bat, though perhaps not at the time, was when a young Babe Ruth stepped to the plate for his only appearance in the 1915 World Series. Ruth had won 18 games that season as a pitcher, yet was known for his monster home runs. Ruth was sent in to pinch hit for Boston starting pitcher Ernie Shore with one out and a runner on first base. Alexander won the battle, getting Ruth to ground out to first base, although the runner did advance to second.

Alexander finished off the complete game to give the Phillies a 3-1 win and a 1-0 lead in their first World Series.