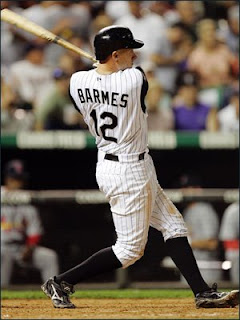 After beating the San Diego Padres and closer Heath Bell in walk off fashion 8-7 on Saturday, the Colorado Rockies are now 2-0 under newly appointed interim manager, Jim Tracy.

That may not seem like a big deal to the average fan, but the truth is, in the last two games the Colorado Rockies have looked nothing like the team that played poorly enough to be camping in last place of the National League West.

On Friday night, the team won because of an outstanding performance on the mound by Jason Marquis, who has proved to be a great off season pickup.

Saturday was the exact opposite.

After the top of the first inning, Colorado was already down 3-0 courtesy of an Adrian Gonzalez' opposite-field home run. However, the Rockies fought back, scoring three runs of their own, due in large part to a Clint Barmes opposite-field triple.

The squad fought back on three occasions, finally putting down the Padres and closer Heath Bell, who had been perfect in all 14 save opportunities, in the bottom of the ninth inning.

Brad Hawpe put the game away with a double the dropped in front of Tony Gwynn Jr. in center field and squirted away enough to allow Garrett Atkins, who had singled in the tying run with two outs, to race all the way from first and dive in to home for the winning run.

It was the first walk off win for the Rockies in 2009, and the celebration that ensued was the biggest since the team clinched the National League pennant in 2007.

It was a game that new manager Jim Tracy can pat himself on the back for. The first move he made on Friday night that was an immediate change from the Clint Hurdle-style of baseball was moving Troy Tulowitzki to the seven hole in the lineup and hitting Clint Barmes second.

Barmes has responded by going 5-for-9 with two doubles and a triple through the first two games. He also stole second base in the ninth inning, allowing him to score when Atkins poked a ball up the middle a batter later.

While Barmes' on base percentage does not necessarily resemble that of a top-of-the-order hitter, the move makes sense for a couple of reasons.

First, Barmes has quite a bit more speed and base running ability that Tulowitzki. This allows him to be more aggressive on the base paths and, like Saturday, more able to steal a base when the Rockies need a man in scoring position.

Second, Barmes struggles with the breaking pitch. That is nothing new. He has always had a difficult time laying off it, and he has an even more difficult time hitting it. Moving him into the No. 2 spot will ensure he sees more fastballs.

When Dexter Fowler leads off and gets on base, pitchers become wary of him stealing second base and cannot risk throwing a slow, breaking pitch. Also, with Todd Helton hitting in the third spot, a pitcher will not want to take the chance of walking Barmes and allowing Helton to hit with runners on base.

Barmes responded well Saturday, carrying the Rockies by going 4-for-5 with a triple, two doubles and a single.

With the team down 5-3 in the fourth, Tracy wasted no time in going to the mound and handing the ball to Josh Fogg to finish the inning. While Fogg allowed one inherited runner to score, he quickly got out of the inning and was able to pitch another scoreless frame.

Confidence was also handed to the bullpen as Alan Embree and Manuel Corpas were handed the ball in pressure situations late in the game. Both responded well to the pressure and shut down the Padres in their respective innings.

While Huston Street gave up the go-ahead home run in the ninth inning to Scott Hairston, it gave the Rockies an opportunity to show how resilient they can be on a night they came back from behind three times.

Sunday the Colorado Rockies will go for their first sweep of the season against the Padres. The game starts at 1:10 MDT and is on the radio on 850 KOA in Denver and on TV on FSN Rocky Mountain.