Mizzou's dominant start on the season could be one of the biggest boosts of the year for Florida.

With less than two years in the conference, Missouri currently shares a throne with Alabama as one of the only teams left in the SEC with a perfect record. Missouri's most recent win, a 41-26 upset over then-No. 7 Georgia, shot the squad up from No. 25 in the nation to a cool 14.

Halfway through the season, the Tigers are the Cinderella story. Florida, on the other hand, has been thrust into more of a nightmare than it has a fairy tale.

While Florida has suffered losses to Miami and LSU, the Gators' main villain has been the injury bug—and it has been feasting. Florida's roster has been shaken by a slew of season-ending injuries, including those of starters Jeff Driskel (QB), Dominique Easley (DT) and Matt Jones (RB). On top of that starting trio, UF has also suffered season losses of Chaz Green, Nick Washington, Andre Debose and Matt Rolin.

But it's actually Missouri's latest injury that could be Florida's biggest game changer. The Tigers' recent loss of starting QB James Franklin at the hands of a shoulder injury has propelled the Gators to three-point favorites on Saturday despite the fact they're ranked lower than the Tigers at No. 22.

This weekend marks the best of both worlds for Florida. The Gators get the schedule-strength boost by playing a ranked team, but they don't have to face their best player in Franklin.

Before his injury against the Bulldogs, Franklin led a Missouri offense that was one of the most potent units in the league. The Tigers offense is No. 12 in the nation with a total offense of 515.7 YPG, No. 8 in the nation in scoring offense at 45.7 PPG and No. 10 in the country with a 51-percent third-down conversion rate. Franklin sits at third in the SEC in total offense, averaging 311.2 yards per game.

After the win over UGA, Franklin hit a season total of 1,577 yards of passing and 290 yards of rushing with 14 passing TDs and three rushing TDs. The QB helped the Tigers to score a staggering amount of points in their six victories this season, with the lowest single-game total at 38.

The QB's ability to excel under center has undoubtedly been key to Mizzou's success this season. Of course, Franklin wasn't acting alone on offense. The Tigers boast elite receivers in L'Damian Washington and Bud Sasser and an elite tailback in Henry Josey. However, expecting new starting quarterback Maty Mauk to form chemistry with the offense, and lead Mizzou to a victory in his first collegiate start while taking on one of the top defenses in the nation... well, that's asking too much.

But it's the lift Florida needs.

The second half of the Gators' schedule is no picnic. No. 14 Mizzou is one of the four opponents left for Florida that currently ranks in the Top 15, with the others being No. 15 Georgia, No. 11 South Carolina and No. 5 Florida State. Right now, it's looking like UF won't get any breaks there.

The fact that Florida gets to play a higher-ranked Mizzou without its starting QB is ideal, especially in terms of the SEC East. With the national championship out of the picture, it's a battle to get to Atlanta and UF's best chances of staying in the race will play out in Columbia. 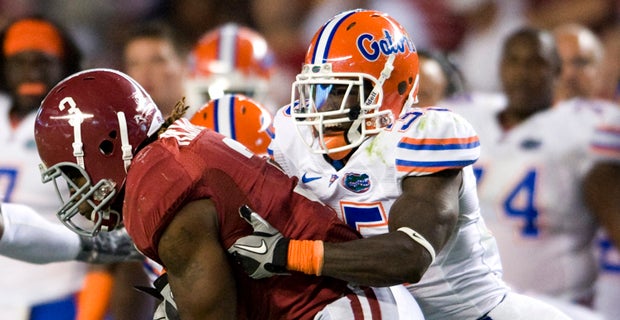