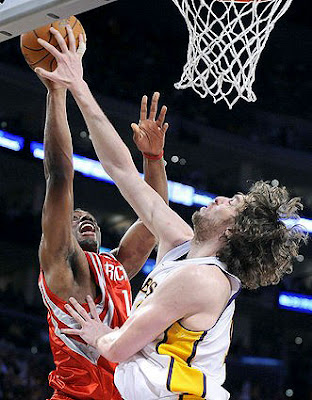 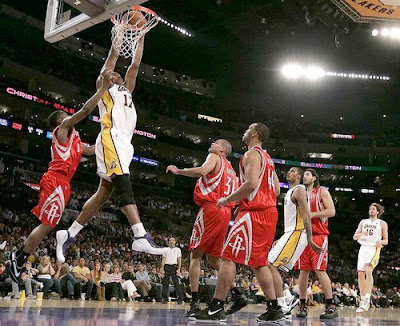 The series win took the Lakers 13 days and 7 games and came down to an anti-climatic series-ending blowout by the Los Angeles Lakers. Some might say that the Lakers woke up, broke out of their doldrums, or finally decided to show up.

All of the pressure in this game was on the Lakers, but the team knew what they had to do to end this series. The team played hard; they were active and aggressive from the start.

The fast start afforded Los Angeles an 8-0 run to start the game.

The Lakers defense was the story in this The defense Los Angeles played in Game Seven forced the Rockets to miss their first 12 shots and forced them into 15 turnovers, from which the Lakers turned into 20 points.

The Rockets went scoreless for the first five minutes of the game and notched their first field goal of the game seven minutes and fifteen seconds into the contest. The purple and gold clad team from Los Angeles raced out to a lead and never looked back.

The Lakers were playing through the post, with Pau Gasol and Andrew Bynum were dominating the paint. The two big men combined for 35 points, 24 rebounds, and five blocked shots. Los Angeles owned the glass and out-rebounded Houston 55-33.

The team continued to play well and build on the lead acquired in the first quarter. The Los Angeles lead reached as many as 25 points; the team held a 51-31 lead at halftime.

The game was essentially over at that point and a bit of a sigh of relief came over the Lakers and some of their fans. The ones in the know realized that the team had to play just as well, if not better, in the second half to secure victory.

The Rockets, working off of the directive of head coach Rick Adelman, looked to cut into the Los Angeles lead and get back into the game. The directive was heard but the Rockets were out of gas and could not muster a charge.

The Rockets traded a few baskets with the Lakers but never got the much-needed stops defensively. Los Angeles was able to maintain their lead and close out Houston to take the series four games to three and advance to the Western Conference Finals against the Denver Nuggets.