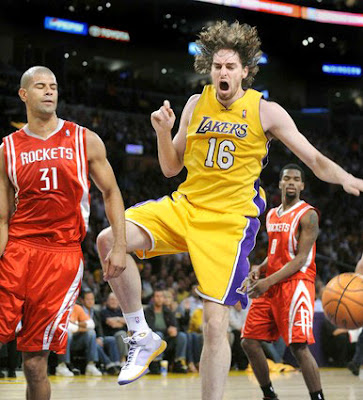 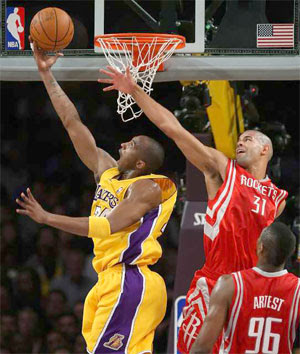 The Lakers came out aggressive and played with a much needed sense of urgency. They had to overcome an early deficit but took the lead by ending the first quarter on a 22-4 run.

Conventional wisdom said that after the fall Lamar Odom took in the third game of the series that he wouldn’t play in this game. Not only did he play—he played well and served as an inspiration to the team, scoring 10 points and six rebounds.

Andrew Bynum showed up and put up 14 points and grabbed six rebounds; meaning that it’s time to officially welcome him to the playoffs.

The Lakers played smart basketball, using their size advantage and playing offense through the post. Their defense was active, aggressive with timely rotations and much improved, leading to a 35-24 lead after the first quarter.

Los Angeles played the game at their pace and tempo and continued to increase their lead. The Lakers defense was solid and the team forced the Rockets into multiple turnovers that L.A. was able to score points off of. This allowed them to get out in transition and score 20 fast break points.

The Lakers' shooting was much improved in Game Five as compared to their Game Four performance; they knocked down shots and continued to outscore the Rockets. Los Angeles was clicking on all cylinders and ended the quarter on a 23-6 run. The score at halftime was 64-39.

The Lakers started the second half with the same aggression that the team began the game with, jumping out with an 8-0 run to start the third quarter. L.A. continued to pour it on and never looked back; the Lakers' lead quickly became insurmountable.

The Lakers solid play continued throughout the third quarter, the score at the end of the quarter was an amazing 94-54. They put on the dominate performance that the team and their fans were waiting to see.

The performance was so dominate that if the Lakers would’ve been completely shutout and held scoreless in the third quarter, the Rockets would’ve still been down by ten points.

The Lakers showed the killer instinct that was missing earlier in the series and continued to score putting a tremendous amount of pressure on the Rockets. They received a contribution from everyone, with seven players scoring 10 points or more.

Celtics guard will make his season debut today against the Knicks