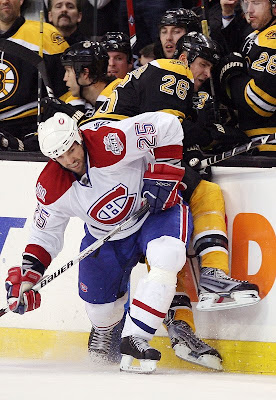 After the game, Hockey Night in Canada reporter extraordinaire Elliotte Friedman asked Bob Gainey "Aside from penalty killing, what else can team do better?" Gainey's answer was simple and direct: "Listen to the coach."

I suspect that the Canadiens were listening to their coach and following the game plan for the first 10 minutes of the game. The Habs were skating, forechecking, and carrying the play. Shots on goal were 8-2 for the Canadiens. Tim Thomas looked beatable.

The Bruins then got their first of five power-play opportunities. Metropolit failed to clear the puck and Marc Savard scored for Boston.

After that, the wheels fell off for the Canadiens. The last half of the period, the Bruins outshot the Canadiens 13-3. Carey Price made several spectacular saves just to keep the team in the game.

Chuck Kobasew scored to give the Bruins a two goal lead. Roman Hamrlik, who struggled all game, was caught roaming high in the slot.

Georges Laraque delivered a blow up hit to Milan Lucic before the period ended.

The Canadiens showed some signs of life with a goal in the first minute of the second period. It was a weak goal for Tim Thomas, who seems to lose all confidence when Kovalev has the puck.

The poor play continued for the Lapierre line. They look completely lost in the series. Lapierre, Latendresse and Kostopoulos got caught up ice, and Hnidy scored on the resulting 3-on-2.

Boston got their second power-play goal on a cross-ice pass to Marc Savard. Lapierre needed to get his stick in the passing lanes.

The Bruins scored their third power-play goal in five chances with only 2.3 seconds left in the second period. Dandenault was caught chasing which setup a 2-on-1 for the Bruins.

Halak started the period with a solid pad save but only faced four shots the rest of the period, none of them difficult.

The Habs just played out the third without mounting a threat. Josh Gorges surprisingly lost a fight to Patrice Bergeron in his first NHL tilt. Even more surprising, Laraque stood by and watched without engaging anyone.

In the final minutes, Lucic continued his thuggery. He began with stickwork on Mathieu Schneider and then crosschecked Lapierre in the head. He skated away when Mike Komisarek arrived.

Given the timing and circumstances, expect Lucic to receive at least a one game suspension for a blow to the head.

The Canadiens finally received their first power-play of the night with less than five minutes in the game.

The Canadiens were beaten by special teams play. Three Bruins goals were scored on the power-play.

Saku Koivu was the only Canadiens player with success on faceoffs at 59 percent. Lapierre won only 27 percent and Metropolit won 19 percent of the draws.

Alex Kovalev was the Canadiens' best forward with a goal on six shots.

Sergei Kostitsyn had some good shifts with his brother and was the co-leader in hits with four, including one on Lucic.

Francis Boullion played just over a minute and a half before retiring to the dressing room for the night. Presumably his groin injury was aggravated.

After the first ten minutes of the game, the Canadiens did not compete and they hung their goalie out to dry.

As Komisarek said, "I don't think the responsibility falls to one guy, especially Carey. We lost tonight because we weren't good enough as a group."

The Habs' special teams simply have to be better starting Monday night when the series shifts to Montreal.

O'Byrne, D'Agostini, Plekanec, Brisebois and Stewart were scratched from the line-up. Markov was out with an injury. Lang is on injured reserve.