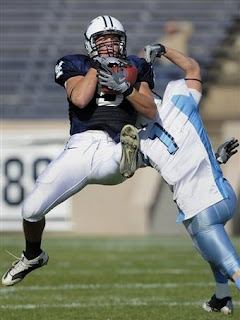 Paul Rice returns, but just about everyone else is gone at Yale

2008 preseason favorite Yale, stumbled out of the gate last year with a loss at Cornell in week 2 and never got their offense going enough to truly compete for the title down the stretch.

The defense was truly great, barely giving up 100 points for the season and keeping the Elis in every game week after week. But the key leader of that defense, linebacker Bobby Abare, is gone to graduation as are an inordinate number of key starters from the last two years.

The offense loses its "Mr. Everything" in RB Mike McLeod.

Throw in a new head coach in Tom Williams, and you have all the makings of a rough transition year in New Haven.


1) Are there any impact players returning?

I think the best overrall returnee is cornerback Paul Rice. With fellow defensive back Larry Abare expected to return as a 5th year player, Yale's pass defense should remain pretty good. On offense, QB Brook Hart is back and while he wasn't spectacular he did avoid making huge mistakes which can sometimes be enough. The entire core wide receiving crew returns as well, including Jordan Forney and H-Back John Sheffield, (who operates more like a WR overall).

But four of the five offensive line starters are gone, making the job for whoever is unlucky enough to try to replace McLeod even harder.

Getting back to the defense, the three key starters on Yale's front five are also lost as is the entire starting linebacking crew, (although to be fair, the Elis only started two LB's in Bobby Abare and Jay Pikerton).

Solid kicker/punter Tom Mante will be back to offer some stability there.

It's not a total decimation to graduation, but it's pretty bad. At least Williams won't have to worry about ruffling too many veteran feathers when he chooses his starting lineup.


2) What has to happen to keep Yale in the first division?

Someone is going to have to run the ball and do it very well. Yale insiders were really high on rising sophomore Alex Thomas a year ago, and they still are but not as much. Again, with a new offensive line to break in at the same time, it's not going to be easy for anyone.

Coach Williams may decide to lean on his experienced receiving corps, but Yale hasn't had to rely on the passing game since 2005 and that was before just about everyone's time on this team.

There will be other QB candidates, but I think Hart will get the starting nod and he's going to have to deal with being the true leader of the offense. He too will need to do that with a new offensive line in front of him.

The defense also needs to pull some new starters out its hat and prove it can be dominant without Abare.

It all seems like a lot to ask of a new coach, new running back, new offensive line, and a mostly new defensive line.

Like Princeton, I think the Bulldogs will be able to beat Cornell and Dartmouth, (those are both home games), but besting Penn, Harvard and Brown seems like a big stretch. The games against Princeton and Columbia, both on the road, will decide whether the Yalies will be a 3rd/4th place team or a bottom dweller. Those games look like toss ups at this early stage.