When a reader wanted to know what I make of the recent rumor about an Alex Song move to Barcelona, I answered that there's nothing to it. "It's just a rumor."

And yet the rumor persists. According David Hytner of The Guardian, Arsène Wenger is not as happy with Alex Song as might be imagined. As to the basis of this conclusion, none was offered in the article, besides Song’s “highly individual streak.”

The London Evening Standard claims that a deal has been agreed between Song and Barcelona.

John Cross, writing for the Daily Mirror, offered to give reasons for thinking that Song should be sold to Barcelona—that, according to the title of his article, which I must confess was infuriating to me.

But what he actually says in the article is far from a strong recommendation to sell Song. In fact, it turns out to be a rather well-moderated article.

Cross' main argument for any such sale is that Song isn't disciplined enough positionally, owing to his adventurous forays forward, neglecting, as a result, the proper duty of a defensive midfielder.

As a matter of fact, most of the criticism I have heard of Song pertains precisely to this.

And not surprising—since this criticism is almost always made not with a little bit of infuriation—almost to a T, these critics want Song sold off: "if he doesn't curb his positional indiscipline."

Yann M'Vila is the player often named as a replacement for Alex Song. Getty Images.

What's interesting, though, is that when Marcel Desailly recommended that Arsenal buy M'Vila because he has the potential to be greater than the Gunners' ertwhile legend, Patrick Vieira, his only reservation about M'Vila pertained to the same weakness that critics find in Song.

For Desailly, M'Vila would be a better defensive midfielder if he'd curb his forward adventures.

What seems to me to be the underlying reason for this criticism (both of Song by his critics and of M'Vila by Desailly) is a mistaken idea regarding the proper duties of a defensive midfielder.

It seems to me that when most people think of a defensive midfielder, the prototype that comes to their mind is the so-called Makelele role.

But what I wonder in the case of Arsenal critics is why the strong vilification of Denilson or of John Mikel Obi in the case of Chelsea—two players, who, according to their critics, are unadventurous, having rather a penchant for side-to-side passing—if this were really the proper type of defensive midfielder?

Put differently, I'd say, if that's the proper definition of a defensive midfielder, then we already have the player and have no need for M'Vila, who, according to Desailly, exhibits the same weakness for which Song is criticized. That player, again, is Denilson.

The reader should suspect that I don't buy the idea of this misconstrued definition of defensive midfielder.

I find this understanding to be in the same category as the thought that a full-back is a defender primarily. He is, and he isn't, and this is true of a defensive midfielder.

Some have compared Song to Sergio Busquets (unfavorably, that is), in saying that the latter is an example of what a defensive midfielder should be in terms of discipline.

But anyone who watches Barcelona, as frequently as is required to make a proper judgment, knows that Busquets does venture forward.

In fact, any team that plays a fluid 4-3-3 never has the defensive midfielder pegged into a single space. You can't find that this is the case at, say, Bayern Munich. Never mind the argument that they play a 4-2-3-1.

And if the critic had observed Arsenal closely last season, he or she would notice that the chemistry that developed between Song and Mikel Arteta manifested most strongly in the pair's understanding of the relationship between defense and attack, both individually and complementarily.

This was still the case in the partnership between Song and Jack Wilshere—a season in which Song scored the most goals for Arsenal.

If, then, I was infuriated by the title of Cross' article, it was because I don't understand why people would despise the very factor that gave Arsenal its dynamism last season. The team was in severe want of creativity, a problem which, thanks to Song's so-called indiscipline, was somewhat mitigated.

Fluid interchange in the midfield, I find, makes a team more dynamic and unpredictable, which, for an attack-minded side, such as Arsenal is, must be important.

I do not buy the idea that Song ought to sit back and be unadventurous. And, again, if that's what we want, we should recall Denilson from loan.

In essence, then, if that's the reason why Arsenal should sell Song, I find it reactionary and shortsighted.

Accordingly, I should say the main reason why Arsenal shouldn't sell song is the creative dynamism he brings to the team.

And if, in fact, Wenger isn’t happy with Song because of his forays forward, then the fault must lie with Wenger, not Song. I don’t imagine that Song would venture so much forward if Wenger hadn’t given him the license to do so.

As to defensive-mindedness, if defensive awareness is required anywhere in the team, this must involve the entire team. 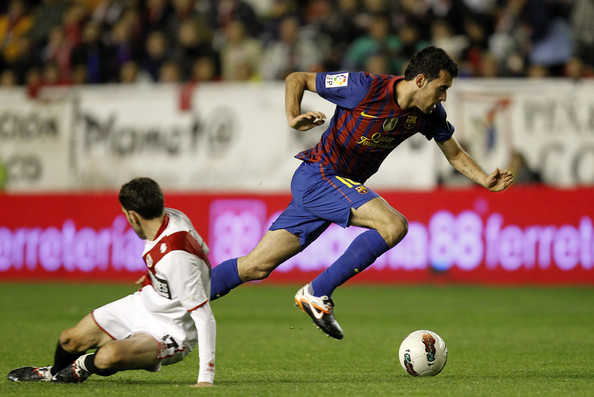 Why would Song want to be a second fiddle to Busquets? Getty Images.

It Doesn’t Make Sense for the Player

The second reason why Song's sale won't make sense is that he still has two years left to his contract. There's no imminent need to sell him. I expand on this below.

From the perspective of the player, I don't see that a move to Barcelona would make sense for Song at this time.

I do not see him playing in the advanced midfield position at Barcelona, where the trio of Andrés Iniesta, Xavi and Cesc Fabregas must be ahead of him.

One can only think that Barcelona want him for the holding role, and if this is the case, it must be as a backup. I do not see him besting Busquets for the starting position at this point, which isn't to say that Song isn't good enough.

Why, therefore (if one thinks in playing terms, in view of the player advancing himself to the topmost rung of the defensive midfield role), would Song want to move to Barcelona to sit on the bench, when it'd make better sense to remain at Arsenal and advance himself further as a player, after which, if he so desired, he could move?

Then again, one must know that there are more attractive things in football than actually playing. Ask a number of Manchester City players.

But I find that careers have been hampered or destroyed by hasty or ill-advised transfer moves. Nuri Sahin, a player with whom Arsenal have been linked (via The Guardian), is a case in point. 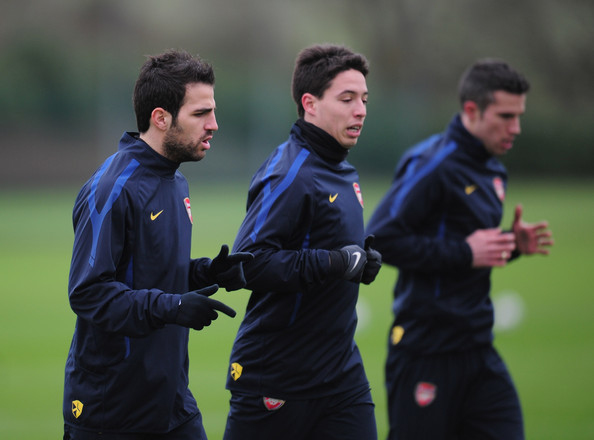 It Negates Arsenal’s Need to Consolidate

The third reason has to do with the idea that I have expounded in my New Era series, the nub of which is that Arsenal must transit from the Stadium Years to a new era of winning, and that to do so, one of the things that must happen is the need for the club to retain its players.

In view of this, it wouldn't make sense to me to see one of the team's best players sold. It is for the same reason I have argued for holding Robin van Persie to the terms of his contract, even though I'm aware that this could involve an eventual financial loss.

Saying that we should sell Song and buy M'Vila is irrational. You are selling the tried and tested for the untried—a player who would undergo the inevitable rigor of adjustment, where in the case of the former, this no longer is the case.

Secondly, selling Song would be in the same category as selling Samir Nasri, Cesc Fabregas and now Robin van Persie—a player you've groomed and who is now just attaining his peak.

It is irrational because fans keep criticizing Arsenal for ostensibly doing exactly this. If this is wrong in one case, why isn't it in another? Or is there an ulterior motive latent in the criticism of Song?

These, then, are the three reasons. I must say that I don't believe that Song is going anywhere, anyway. If Arsenal were to sell Song, I'd be shocked, and a great deal of my belief in the team and in Wenger would be shattered.