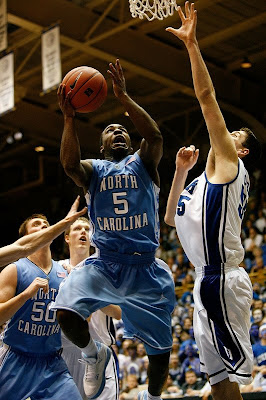 “He flops! He whines! He travels every time!”

He may flop, he may whine and he may travel in the eyes of the Crazies who chant the mantra above ad nauseum every game, but what he really does is win every time he comes to Durham.

Other than a couple fellas who played for a very good Wake Forest teams from 1992-97, nobody else has done what Tyler Hansbrough, Danny Green, Mike Copeland and Bobby Frasor have done—win four straight on Coach K Court. Not bad, considering the other two would be Tim Duncan and Rusty La Rue, and Duncan is walking around with a four NBA Championship rings and two MVP trophies.

To make matters worse for Duke, the Heels hung 100 points on them in Cameron for the first time in 26 years. Especially impressive considering it was Duke who was on schedule to hit the century mark after posting 52 first half points.
Clearly, at halftime trailing 52-44, North Carolina had a decision to make: Play their beloved racehorse uptempo style in the second half or play defense. Having given up 91 to Maryland recently and on pace to give up 104 to the Blue Devils, the decision for Ol’ Roy was probably easy.
Defense, and a side order of Ty Lawson.

UNC’s glaring weakness on defense is their inability to stop dribble penetration. Last night, they discovered that if you have Ty Lawson on your team, every team you play has the exact same problem. 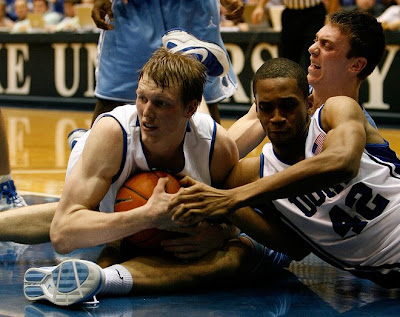 Carolina buckled down and played much tougher half-court defense which cooled down the hot shooting Devils who had made 61.8 percent of their shots including six of nine from behind the arc in the opening stanza.

It was a completely different game in the second half for Duke. The Heels duplicated their 50 percent shooting of the first half, while holding Duke to 36 percent (13 of 36) and a miserable 13 percent (2-15) behind the three-point line.

Ty Lawson scored 21 of his 25 points in the second half, and all the UNC starters scored in double figures. Tyler Hansbrough scored a quiet 17 points that included a shot clock beating, demoralizing, second-half three-pointer. Wayne Ellington and Danny Green both scored 15 points, and Deon Thompson’s offensive alarm clock finally went off in the first half where he scored 10 of his 12 points.

The Heels (22-2, 8-2) are the first team to go triple digits on Duke this season and they got there in their typical fashion—using runs of 25-11 and 14-0 to first take the lead for good and then stretch it to 17 points.

North Carolina is now in sole possession of first place in the ACC.

In his post game interview, Coah K was succinct, “We aren’t as good as they are right now. They’re better than us. It’s going to be difficult to beat them.” 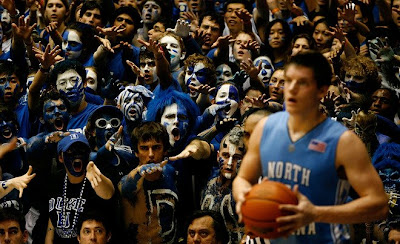 GAME NOTE: Senior Bobby Frasor (rhymes with razor, not Frazier like the boxer or the evergreen) finally emerged from his shooting slump. The former high school All-America from Chicago has struggled with his shot all season and had not made a three-pointer since George Bush was president.

On his final trip to Cameron, “Razor” Frasor, made 3 of 4 from “Treyville at Kville” scoring nine points in 27 minutes.