Arguably the biggest game of the entire season ended up as one of the most entertaining of the season.

Manchester City, the "noisy neighbors" of Manchester United, won their first League title in more than 40 years on Sunday, beating Queens Park Rangers 3-2 in front of an Etihad Stadium that was packed with eager, desperate fans.

In my short football fandom, I have seen some spectacular games, such as:

However, I can honestly say that Manchester City's match with QPR was the greatest game I have ever seen in my life.

It had everything that a title-deciding race should have: a team desperately trying to end a title drought, a team on the other end of the spectrum fighting for their lives trying to stay up, controversy, suspense and plenty of goals.

This was one of the few games I've watched where I was left with goosebumps by the end.

The game started out innocently enough, with the entire audience knowing what was on the line: If City should lose, they would have to settle for second place if United beat Sunderland, which was highly probable. If QPR should lose and Bolton should win, QPR would go down into the Championship after only one season.

The City fans wanted—hell, expected—an early goal against a struggling QPR side.

As the two teams approached halftime, City were throwing everything they had at QPR to get the goal they so desperately needed in order to ease their own minds as well as their fans'.

Yaya Toure, who earlier suffered an apparent hamstring injury but was determined to stay on the pitch, collected the ball at the edge of the penalty area and slotted it to a rushing Zabaleta. The Argentinian took a single touch and rocketed it at Kenny, who couldn't handle the pace of the ball and could only watch as the ball bounced off the far post and over the line.

Bedlam ensued, and City went into the break 45 minutes away from history.

The Two Luckiest Men on the Pitch

With Man City up 1-0 entering the second half, it remained to be seen how QPR would play out the last 45 minutes.

They were down, and Bolton were 2-1 up against Stoke.

If results stayed the same, QPR would be back in the Championship.

Djibril Cisse, the lone front man for QPR, was again all by himself when the ball was directed toward him from the midfield, but the ball appeared to drop short. Joleon Lescott looked to have it under control.

Bizarrely enough, Lescott couldn't control his header, shooting it behind him and straight into the path of Cisse, who took it on the half-volley past Joe Hart.

Joey Barton, the Premier League poster boy for bad behavior, received a red card for an intentional elbow to the face of Carlos Tevez. Granted, replays showed that Tevez kicked out at Barton's calf, but the QPR midfielder's reaction was despicable and uncalled for.

His subsequent stomp on Sergio Aguero as he was leaving the pitch was the epitome of disgrace.

Tied 1-1 with a title contender and the hopes of staying in the Premier League on the line, and Barton gets sent off. He could've cost his club a Premier League spot, millions of pounds and possibly could still have cost himself a job.

Barton and Lescott were the luckiest players on the pitch today. If City had lost, it would've been largely on Lescott's shoulders due to his shoddy defending on the day. If Bolton had won, sending QPR down, Barton, by and large, would've been the scapegoat.

After Barton's send-off, QPR rarely saw possession of the ball. In the 66th minute, the Hoops defense managed to clear it out to the wing to substitute Armand Traore. As Traore skipped around Zabaleta and sent in a hopeful cross, no one on the City defense was watching Jamie Mackie.

Mackie threw himself at the ball, striking it with his head. The ball hit the ground and floated over Hart and Lescott into the net.

In an instant, the title race was turned on its head; QPR were improbably up 2-1.

Tears were freely flowing at the Etihad.

Stoppage time. The cruel mistress of football. It can either make or break a team.

The board went up, signalling five minutes of stoppage. Five minutes for City to win the title.

The first minute went by. Roberto Mancini, hair dishevelled and eyes crazy, was hopping up and down and gesticulating wildly on the sidelines, urging his side forward.

City won a corner. Aguero swung the ball in. Substitute Edin Dzeko rose above the crowd to head the ball home.

Suddenly, a faint flicker of hope began to shine around the Etihad.

Crazier things have happened in football.

With a minute remaining, Aguero took the ball through the middle and demanded a one-two with Mario Balotelli. The Italian slipped, but managed to get the ball back into Aguero's path.

Aguero stepped around a defender and powered the ball home at the near post.

The blue half of Manchester exploded.

With virtually the last kick of the game, Sergio Aguero—arguably the best Premier League signing this season—won the title for Manchester City.

Party on, Citizens. Tonight is for you. Thank you for providing us with possibly the greatest Premier League game of all time. 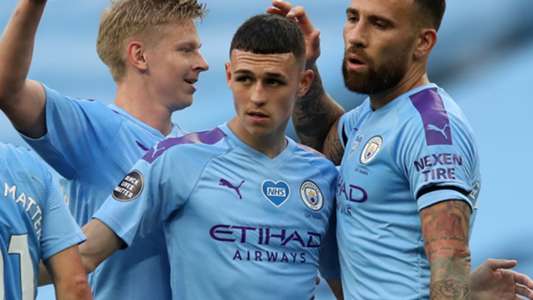