At Over the Limit in just over a week and a half, the World Heavyweight Championship will be defended in a Fatal Four-Way match, which all but proves the brands mean nothing. Sheamus, Alberto Del Rio, Chris Jericho, and Randy Orton are all competing in a feud that seems to be thrown together for a B-level PPV.

Although the build is not off to a great start, the four competitors are very skilled in the ring and should be able to deliver in a match that requires a great deal of coordination and planning.

With the Fatal Four-Way match being a rare occurrence, what is the benchmark for a great performance? Look no further than Backlash 2007, which is the best of its type in WWE history.

The four participants in the match are all either Hall of Famers or will be in the future. The champion was John Cena, who was in the midst of a year-long title reign that only ended because of an injury. Cena was proving himself against big names left and right, beating one of his counterparts at WrestleMania 23: Shawn Michaels.

HBK, however, had bragging rights heading into the contest because of the excellent one-hour battle on Raw just six days earlier. It was the match of the year, and rightfully so, and it was Michaels who prevailed on that night. He had all the momentum in the world and was poised to gain the WWE title for the first time since 1998.

The other two wrestlers were former teammates and rising stars in the industry: Edge and Randy Orton. The Rated-R Superstar used 2006 to make himself known as a main event player. Orton had been there since 2004, when he became the youngest heavyweight champion in WWE history. Both men had tasted championship gold before and desperately needed to get the belt back. 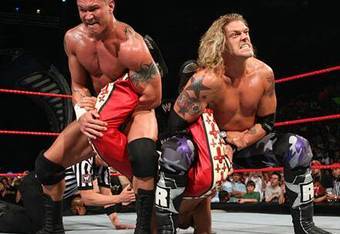 Usually, these types of matches involving multiple superstars never turn out to be the best wrestling contests. The pace of the bout can vary too much, and often times the match will feel cluttered, with too many people trying to do too many things.

This Fatal Four-Way match, however, was different.

Cena and Michaels disposed of their opponents to start the match and continued their hour-long classic from the previous Raw. Things would spill to the outside pretty early, and HBK would land a huge moonsault onto all three of his opponents to gain the early advantage.

HBK and Edge would then go at each other until the other two men would recover and turn the tables. These rotations through the first part of the match would allow all four superstars to remain fresh for when the paced picked up later on.

Towards the middle of the contest, Rated-RKO would re-form and beatdown on the faces until Cena got a burst of adrenaline and hit some of his signature moves. The action went back outside the ring, and the team of heels was quickly over when Edge laid out his former tag team partner with a chair shot to the head.

Cena would then put the STFU on just about anyone he could find, but it would be HBK who stopped the champion's momentum. He would hit elbows on two men, but when he went for the third, a tower of doom involving all four men slowed the pace down for a few-second breather.

Then, the flurry of finishers proceeded. First was Orton's RKO. Then Edge's Impaler DDT. After that, another spear. Cena laid out Edge with an FU, but turned right into some Sweet Chin Music.

That was it. The match was over. But unfortunately for Shawn Michaels, he wasn't the winner. Cena retained because the force of the Sweet Chin Music caused him to land with his head and neck on Randy Orton. That was good enough for the cover, and Michaels couldn't stop the pin.

It was an excellently thought out match and well executed by four of the top men this industry has ever seen. They were able to take a Fatal Four-Way match and make it exciting throughout its entirety, which is something the main event of WrestleMania 2000 had difficulty with.

The next Fatal Four-Way match will be at Over the Limit, and if they want it to be called the best, this is what they have to live up to. The task is an arduous one, but the skills are all there for this match to get to the top of the list, which is currently led by this main event from Backlash 2007.

Around the WWE Universe 📰

Around the WWE Universe 📰