In Tim Welke's view, the first baseman apparently just needs to be near the bag. (MLB.com)

When Major League Baseball gets together with the umpire and player unions to discuss what calls should be subject to review under an expanded instant replay system, the three sides should strongly consider inviting umpire Tim Welke to the negotiations.

Welke doesn't necessarily have to speak. His union head is there to do so for him. But just stand him on a rotating platform, letting everyone get a good look at him as he revolves. And behind him, there can be a screen on which examples of his blown calls play in a loop.

He can be the reminder of why everyone is there discussing wider instant replay in the first place.

During Wednesday's game between the Colorado Rockies and Los Angeles Dodgers, Welke made perhaps the worst call you'll ever see in the top of the sixth inning.

If you haven't seen the play already, the Dodgers' Jerry Hairston Jr. hit a chopper to third base. Rockies infielder Chris Nelson made a diving stop and threw to first base. The wide throw pulled Todd Helton far off the bag, yet Welke inexplicably called Hairston out. 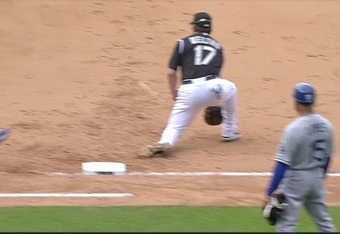 The call was apparent to everyone else in Coors Field except for Welke. Apparently suffering from poor depth perception, Welke viewed the play from the second base side of the bag, rather than on the baseline, and thought Helton's foot was far closer to first base than it was.

But Helton knew he was nowhere near the bag.

"Neighborhood?" Helton said to reporters after the game. "It wasn't in the same area code."

You can watch the play here.

This comes 10 days after Welke blew a call in Detroit, calling a bunt by the Texas Rangers' Alberto Gonzalez a fair ball when replays showed that the ball hit Gonzalez and should have been ruled foul. 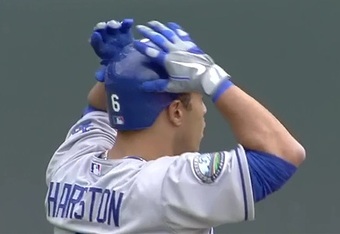 Both blown calls could easily have been overturned by instant replay, but aren't reviewable under the current system. Can it be any more obvious that instant replay needs to be expanded beyond determining whether home runs went over the wall or were fair or foul?

One of Welke's fellow umpires can't come over and say, "Wow, Tim—you really kicked the [bleep] out of that call. He was out by a mile," and overturn the call. No, Welke has to ask one of his colleagues to consult on the play first. It's kind of like how a vampire can't enter your house unless he or she is invited.

I also think it's a problem that the umpires declined to speak with a pool reporter afterwards. But if a player can flee the clubhouse and decline facing the press, then I suppose it's fair umpires can do so too.

However, all of this could be avoided if major league umpiring crews just utilized the technology at hand. Whether the umpires handle it amongst themselves, a dedicated replay official views the play in the press box, the league office reviews it from New York, or a manager calls for a challenge, another option should be available to get these calls right.

Otherwise, it just gets embarrassing, as it was yet again for Welke.

Rockies Running Out of Options with Arenado

All-Star 3B is right to be disgruntled, but it's getting harder to see a solution, writes @ZachRymer

Rockies Running Out of Options with Arenado