This Saturday night showdown between the North Carolina Tar Heels and the Duke Blue Devils is not just another game.

Every time these two powerhouses take the court it is important, but this time they're playing for the regular season ACC title and the likely No. 1 seed in the ACC tournament. On top of that, the last time they met, the Blue Devils buried a buzzer-beating three to beat the Tar Heels in Chapel Hill.

If you don't think this game is going to get nasty, then you got another thing coming.

The Tobacco Road rivalry is going to amaze once again. 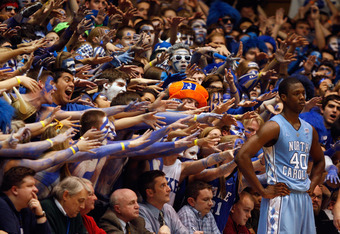 The Duke-UNC domination of the ACC is nothing new, and this is just another year for these two dominant programs. GoDuke.com writes:

Duke and UNC have won or shared the ACC regular season title in 13 of the last 15 seasons—and the last nine in a row (counting this year). Maryland finished first in 2002 and Wake Forest in 2003. Virginia earned a share of the regular season title with UNC in 2007 and Maryland shared first with Duke in 2010. But that’s it for the rest of the league.

Not only is that impressive, it is unheard of.

The top NBA prospect in this game is arguably the most gifted scorer in the country. The last time these two teams met, Barnes was hobbled by an ankle injury and still scored 25 points in 35 minutes.

He did a good job of getting to the stripe, and led the game with 12 free-throw attempts. 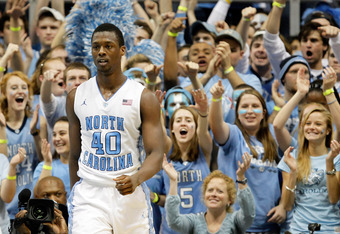 Duke's primary focus will be to contain Barnes early in this game and hope that he doesn't get into a rhythm.

Duke drained 14 three-pointers the last time these two teams played. Not only was that 14 times the amount of what UNC hit, but it was more than they even attempted.

The Blue Devils hoisted a ridiculous 36 three-point attempts in Chapel Hill, while the Tar Heels put up only six.

It makes sense, considering the monstrous tree trunks UNC has underneath the basket in John Henson and Tyler Zeller, but even for Duke that is a lot of perimeter shots.

The Tar Heels will be out to take that away this time, and won't be beat the same way. UNC led by 12 points for nearly the entire second half nearly a month ago before melting down late in the game, and you know damn well that Roy Williams hasn't let them forget it.

Three-point shooting will make or break this game, and it would be a surprise if the first game's hero, Austin Rivers, even gets a clean look at the basket.