Mix Diskerud looks like the kind of player Jurgen Klinsmann is hoping to bring into the USMNT squad during his reign as coach.Kevork Djansezian/Getty Images

Landon Donovan, Clint Dempsey, Carlos Bocanegra and Steve Cherundolo (especially the 33-year-old Cherundolo) are getting old and it's time for the next crop of American players to come through the ranks and replace them in time for the 2014 World Cup in Brazil. The World Cup qualifying rounds are the perfect time for U.S. Men's National Team coach Jurgen Klinsmann to mix things up and find the break-out players who could lead the next generation of Yanks.

Here's a list of seven players who should breakout if given the chance.

Mix Diskerud—Mix has been on the USMNT radar for a few years now. The Stabæk midfielder made his debut when he was 18 years old and hasn't looked back. His outstanding quickness and vision are attributes Klinsmann is trying to add to the National Team. With a move to Belgian side KAA Gent over the Jan. transfer window—a loan deal with an option to buy—Mix looks like he's heading in the right direction to step into the USMNT midfield sooner rather than later.

Joe Gyau—He may be small—5' 6", 150 lbs—but what Gyau lacks in size he makes up with pace and low center of gravity. The American forward is the kind of player Klinsmann will want to employ in the wider areas—he's fast, and he wants to take on defenders through his attacking style of play. With a little more fine tuning at Hoffenheim, Gyau could find himself becoming the USMNT's next Landon Donovan.

Terrance Boyd—A big, strong forward who now plays for 2010-11 Bundesliga champions Borussia Dortmund, Boyd has a knack for the goal, something the U.S. sorely lacks. If Boyd can continue to progress at Dortmund, a club known for bringing youth through its side, he will find himself on the list of available forwards throughout qualifying. With Juan Agudelo and other American forwards struggling to live up to the hype, Boyd could find himself in prime position to jump in and make an immediate impact. 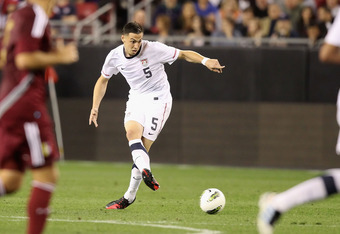 Geoff Cameron was called into USMNT camp by Jurgen Klinsmann this winter and put in an impressive performance against Venezuela in a friendly match on Jan. 21.Christian Petersen/Getty Images

A.J. Soares—The New England Revolution centre-back was one of the team's few bright spots in 2011. Soares struggled at times in his rookie season for the league's worst defense, but the centre-back showed he has a huge upside and is the kind of defender Klinsmann wants in the center of the U.S. defense. Soares, a former attacking midfielder before college, is a solid defender with loads of confidence on the ball. His passing range and comfort on the ball make him a player who could push for a spot on the 2014 squad if other more notable players continue to slip up.

Zarek Valentin—A young and versatile defender, Valentin can give the USMNT the kind of defender it needs: a ball playing defender comfortable in multiple positions along the back line. He's a strong defender who is still learning the game, but his ability to read and study the game is what really sets him apart from other young American defenders looking to break through the ranks and make an impact. Chivas USA didn't do itself a favor by leaving him unprotected in the expansion draft for the Montreal Impact to draft.

Geoff Cameron—Finally, Cameron and the Houston Dynamo have settled on him being a centre-back. The USMNT will need a seasoned veteran with big-game experience to lead a young and emerging defense.

Joshua Gatt—Timmy Chandler will certainly be one of the full-backs for the USMNT, barring injury, come the 2014 World Cup. The opposite flank is a spot Gatt could very well be if he continues to improve and climb the ladder of European soccer. Gatt moved from the right wing to right back this year after transferring to Molde. His performances on the right side of the defense helped the Norwegian side win the Tippeligaen for the first time in the club's history. His pace and knack for getting forward are major upsides.

Jared Jeffrey—Jared Jeffrey broke out at the 2007 Under-17 World Cup for the U.S. Under-17 team and signed with Club Brugge of the Belgian first division. After not breaking through the Brugge system, the midfielder moved to Mainz in the Bundesliga in the 2009-10 winter transfer window. The dynamic midfielder has spent plenty of time on the Mainz second team and looks close to getting into the Mainz first team. His upside is high, and his play even in the lower leagues of Germany means he's well-versed in the style of play Klinsmann wants to employ as the USMNT coach.

🐍 Idolized Kobe growing up ❌ Wasn’t trolling Sean Payton 👀 Who is Lizzo’s man on the Vikings?