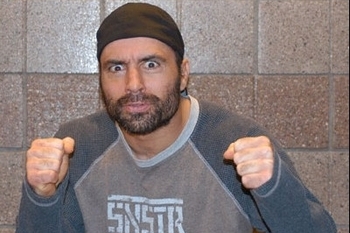 Have you ever wondered what would happen if a comedian fought a famous actor?

UFC expert analyst and hilarious stand-up comedian, Joe Rogan, is all about settling the beef with action-star Wesley Snipes.

Both guys have been entangled in a back and forth, when and where, trash-talking media scrap over the past few years.  You can view it here.

Granted this was a fairly long time ago, Rogan has consistently maintained his willingness to "choke out" Snipes.

While many people view Rogan only as a TV personality and Snipes as a Hollywood action diva, each of them are well known for their individual mixed martial arts accomplishments.

Snipes, who is currently doing prison time for tax evasion, is a fifth level black belt in Shotokan Karate and has trained in various aspects of mixed martial arts since he was 12.

No wonder why this has been a heavily anticipated spectacle, these dudes are no joke.

Rogan, who is better known for his Fear Factor days than his on-point Octagon expertise and mind-changing comedy, has been open to the idea of setting up the would-be UFC celebrity showdown.

However, Snipes isn't due to be released from prison for at least another two years, adding to the fact that he never responded to the first challenge that Rogan made.

With that said, we can only speculate as to how the fight would go down.

Here is how each of them would fare.

Beyond the Octagon Popularity 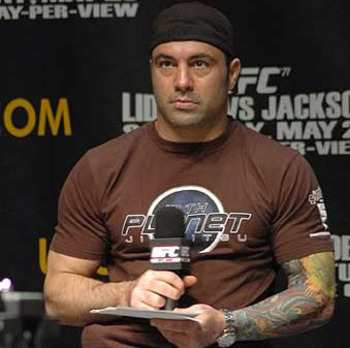 It's easy to say Wesley Snipes is a bigger popularity draw from all his Hollywood movie success, but the fact remains that Joe Rogan has produced so much creative material of late, he's nobody's runner up.

Whether it's his one-hour stand-up specials on Comedy Central, his weekly "anything goes" podcast, his soon to be released book, or his spontaneous and informative UFC color commentary, Rogan has exceeded Snipes' hard-earned fame over the past few years.

It also doesn't hurt that your competition has been in prison for tax evasion.

So on a beyond-the-Octagon front, Rogan is doing too much, too often to take a backseat to Snipes. 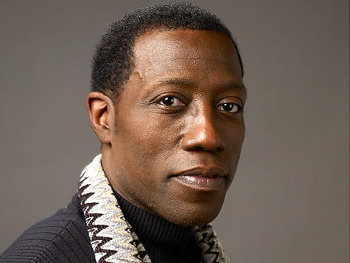 This is difficult to judge.

Not only because neither guy possesses Manny Pacquiao speed, but because it really could go either way.

Joe Rogan could be fast, but let's face it, he looks to be more of a stocky pit-bull type of fighter, using his takedown abilities to eliminate speed as a factor.

Wesley Snipes, on the other hand, seems like the flashy type, using quick hands and unpredictable bursts of speed to attack not only offensively, but adequately defend.

It's hard to say.

But based on each fighter's strategic game plan, Snipes would rely on speed more than Rogan so I'm going to give it to him. 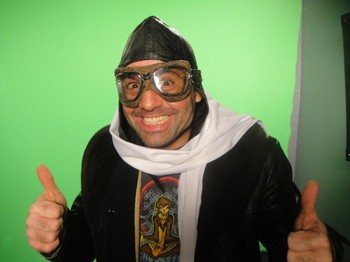 This was one of the more clear-cut advantages I'm giving out.

Because realistically, Wesley Snipes is older, probably hasn't trained like Joe Rogan does in a while, and would more than likely dump more energy at a higher rate.

That is to say if Snipes does in fact decide to beat Rogan on his feet.

Rogan, on the other hand, is well known for eating super healthy, takes multiple supplemental vitamins every day, and works out on a daily basis, cardio included.

There's really no need to discuss this any further, Rogan takes the cake. 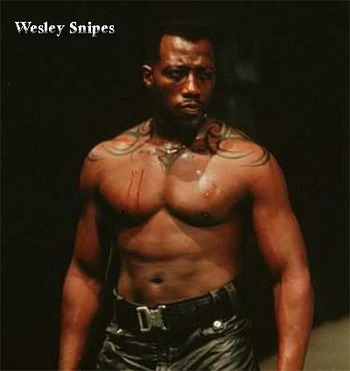 Power is an interesting topic.

With that said, it's hard to judge whether Rogan and Wesley Snipes are that far apart in the power department.

Snipes looks more jacked and seems like he'd depend on his knockout ability to win the fight.

On the other hand, Rogan has serious power in his legs, but his hands are in question.  At least I think so.

But on this one, I'm going to give it to Snipes since Rogan is already up 2-1. 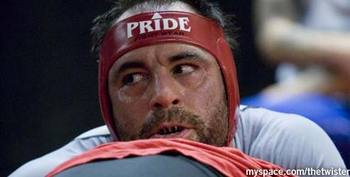 It's evident by his demeanor, colorful UFC commentary and his sometimes abrasive comedy.

Strictly based on intimidation and the ability to unleash hell at any given moment, Rogan once again edges out Snipes in shear physicality.

Personally, I'd flee the scene if Rogan was coming my way.  Fear is a factor. 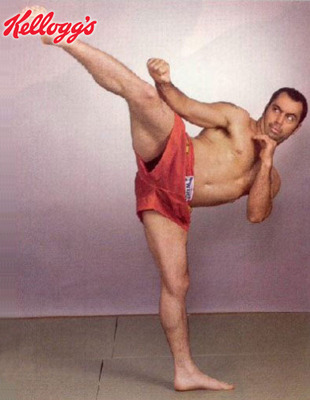 Flexibility is a major issue.

Not only is it going to help Joe Rogan tie up Wesley Snipes on the ground, but it no doubt helps defensive techniques and strategies.

Rogan, a former kickboxer, is more than capable of pulling off these close range melees, culminating into a sound submission game and a serious ground and pound arsenal.

Snipes could pose some difficulties for Rogan due to his size and strength, but the comedian's superior flexibility and experience in jiu-jitsu will help help him keep the action star at bay.

Once again based on their game plans and different fighting styles, I'm going to give the stand-up game to Wesley Snipes.

Granted, Joe Rogan has some nasty kicks up his sleeve, it would be hard for him to keep Snipes striking in check.

He's got more power, a longer reach, and would look to stand and bang as part of his game plan would suggest.

Even though both fighters have a decent chin, I'm speculating, Rogan should want no part of the "Undisputed" actor.

This has Joe Rogan written all over it.

Not only does Rogan train and learn from a highly respected Eddie Bravo, but he's knowledgeable enough to even teach Georges St-Pierre some kicking techniques.

His MMA appetite is unsatisfied, always looking to learn and master new techniques.

With his martial arts mentality and experience, Rogan's overall MMA game would be too much for Wesley Snipes' Taekwondo. 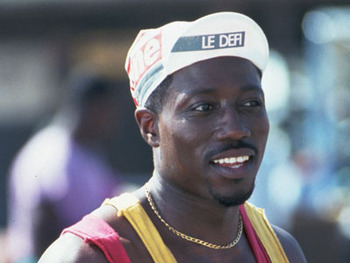 For this fight, Joe Rogan and Wesley Snipes are going to bring it.

Not only in the media pre-bout, but in the center of the ring.

Each of them bring different martial arts backgrounds to the Octagon that pose as both advantages and disadvantages.

By looking at these different MMA upbringings, we can speculate as to what each fighter is capable of pulling off.

However, it's nearly impossible for us to gauge exactly what each fighter can do when the cameras start rolling.

And for that, we have what's called intangibles.

Whether is dressing up as Blade, having Woody Harrelson man his corner or proving to be the true Demolition Man of MMA, Snipes would surely have something up his sleeve.

For Rogan, his fight strategy and game plan would be more predictable.  Not because he's the inferior fighter, but actually because he's more skilled and disciplined.

Rogan would stick to what works best, using his training and throwing in some unorthodox kicks as well, but for the most part he'd look to keep it professional and pick apart Snipes as the fight goes on.

If we're basing intangibles on strictly shock value, Snipes takes the round. 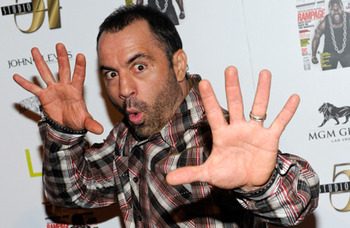 I've already touched on the different fighting strategies that Joe Rogan and Wesley Snipes would bring to this fight.

Rogan would look to use his stamina and good ground game to take down Snipes and end the bout via submission or TKO.

Snipes would more or less try to keep the fight at bay, using his longer reach and seemingly better stand-up skills to slap Rogan around on his feet.

Neither fighter is well versed in everything or far superior than the other, so sticking to each of their game plans could make the difference in winning or losing. 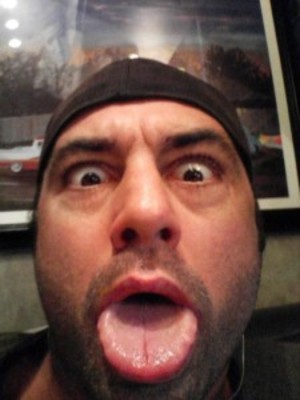 To be honest with you, I'd pick Joe Rogan over Wesley Snipes just based on his comedic swagger and knowledge of MMA.

But by basing this fight decision strictly on experience and ability to beat the other guy, Rogan still comes out on top.

He's more versatile as an all-around MMA fighter, has better stamina and a more productive ground game, and when the fight's on the line, I believe Rogan can muster up that extra tank of gas to put an end to Snipes.

The only chance Snipes has in this celebrity showdown is to catch Rogan with a strong hook or sneaky uppercut.

Rogan would be extremely tentative in challenging the longer reach of Snipes, so it probably wouldn't be late into the first round until we saw any true action.

Rogan's chances of getting Snipes to the ground are very high, so giving him the "W" just seems natural.