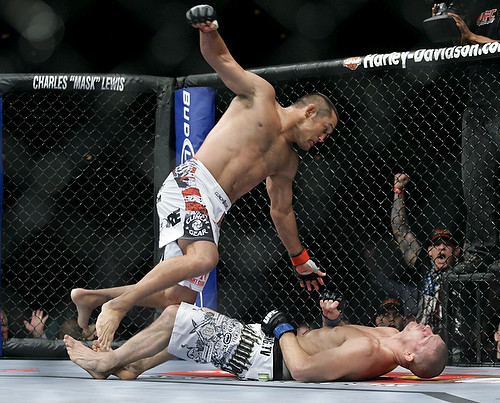 While true mixed martial arts (MMA) fans appreciate the ground game just as much as an stand-up war, there is really nothing in the sport that compares with a brutal knockout.

Because of the excitement people gain from watching them, YouTube has become saturated with many MMA knockouts from the amateur ranks to the UFC.

For your viewing pleasure, here are 25 of the best MMA knockouts that YouTube has to offer.

After losing to Don Frye twice earlier in his career, Gary Goodridge took advantage of an opportunity for revenege at Pride: Shockwave 2003.

Less than 30 seconds into the fight, Goodridge landed a head kick that floored Frye and his awesome mustache.

I don't know if this knockout is the most brutal one I've ever seen, as the poster of this video titled it, but it is certainly appropriate to describe it as brutal.

It took all of 17 seconds for the fighter in the camouflage shorts to lands a hard straight right hand that took his opponent's feet out from under him.

After being released by the UFC for the first time, Jonathan Goulet returned to Canadian organization TKO.

In his third fight since returning to TKO, Goulet met Travis Axworthy. As you can see, Axworthy probably wishes the UFC would have just kept Goulet around.

Shortly after this fight begins, the competitor in the blue shorts lifts his opponent and spikes him on his head.

The announcer then says, "That's gonna leave a mark." It looks like it might have left a broken neck as well.

For Edgaras. nothing good came out of this matchup, as Mattsson put him to sleep with a brutal head kick.

Takaya did more remain undefeated against Palling. He finished the fight with a devastating head kick.

Shannon Ritch has a pretty abysmal career record of 47-74 with four no contests, but that didn't seem to matter in this fight.

At Shark Fights 2 in 2008, Ritch knocked out John Wood in under one minute with this spectacular head kick.

This Dan Hardy wannabe lifts his opponent and looks to end the fight with a slam.

Well, he accomplished his goal but in a way that would put Gray Maynard's self knockout to shame.

This knockout gave Suloev his ninth consecutive win and put him one step closer to his UFC debut.

In his first Bellator fight as Bellator Middleweight Champion, Hector Lombard took on Jay Silva in May 2010.

The fight ended as quickly as it began, as Lombard finished Silva in only six seconds.

At UFC 102, Nate Marquardt fought Demian Maia in a battle between two middleweight contenders. The battle didn't last long, though.

As Maia attempted to throw a kick, Marquardt blasted him with a right hand that took the Brazilian's feet out from under him and ended the fight.

Dan Hardy prides himself on his striking, but his chin failed him in this UFC 120 fight with Carlos Condit.

Fighting in front of his home crowd in London, England, Hardy attempted to hit Condit with a left hook, but Condit's counter was quicker and landed right on the button.

Brian Ebersole recently unleashed his cartwheel kick against Chris Lytle in the Octagon. However, it didn't have nearly the same effect as the one landed in this video.

In this case, Ebersole was able to land the cartwheel kick clean and finish the fight in spectacular fashion.

This knockout come from a Bellator 6 fight between Yahir Reyes and Estevan Payan.

Less than two minutes in the second round, Reyes landed as clean of a spinning backfist as you'll see, which knocked Payan out cold and sent him airborn.

Anderson Silva's last loss came more than five years ago in a disqualification against Yushin Okami. Silva's next opponent was Tony Fryklund at Cage Rage 16.

Two minutes into the fight with Fryklund, Silva landed an elbow uppercut that put his opponent to sleep. The win was the first of Silva's current 14-fight win streak, which could be stretched to 15 if Silva avenges his loss to Okami in his next fight.

At TKO 25, Chris Clements and Lautaro Tuces signed to fight each other. It was a good thing these guys weren't getting paid by the hour because this one didn't last long.

In fact, it lasted all of three seconds. I'm really not sure what Tuces was trying to accomplish with his wild aggression to start the fight, but needless to say, it didn't work.

In the midst of a 10-fight winning streak, Norifumi Yamamoto was looking to continue his run of dominance against Kazuyuki Miyata.

The fight lasted about as long as it will take me to type the period at the end of this sentence, as Yamamoto landed a flying knee right after the start of the fight.

Scott Smith and Pete Sell met at The Ultimate Fighter 4 Finale in 2006.

After Sell hurt Smith with a body punch in the second round, he rushed at Smith to finish the fight, but Smith caught Sell by surprise and scored an unbelievable knockout.

If you don't know who UFC newcomer and UFC 131 competitor Dave Herman is, here is an example of the exciting fighting style you should expect to see from him. This knockout came at Sengoku 11 against Jim York.

Herman has only lost twice in his career with one of those losses coming by way of disqualification for an illegal knee.

Capoeira might not be the most effective style in MMA, but it is certainly the most exciting when used correctly.

In October 2004, Wanderlei Silva met Quinton Jackson in a rematch for the Pride Middleweight Championship.

The rematch ended in very similar fashion to the first meeting between the two legends, as Silva knocked Jackson unconscious with a knee. The knockout left Jackson's limp body dangling on the ropes.

About four years after the knockout on the previous slide, Wanderlei Silva and Quinton Jackson met for a third time.

At UFC 92, Jackson finally got a little revenge with this brutal knockout.

In what ended with another classic knockout by Quinton Jackson, "Rampage" met Ricardo Arona in June 2004.

When Arona attempted to secure a triangle choke, Jackson lifted his opponent above his head and slammed himto the canvas with full force. Arona was out cold immediately.

Very few videos of UFC fights last long on YouTube, but the constant demand to see this video has ensured that it will be available for the viewing pleasure of American MMA fans for a long time to come.

After representing the United States as a coach on The Ultimate Fighter, Dan Henderson knocked out brash United Kingdom coach Michael Bisping with his infamous overhand right. That wasn't enough, though. Henderson added one more massive blow to the already unconscious Bisping for good measure.

In May 2008, Shawn Parker and Tyler Bryan met in a fight refereed by MMA veteran Shonie Carter. What happened once the bell rang, nobody could have predicted.

Both fighters swung wildly and knocked each other out simultaneously, but what is even more entertaining is Carter's reaction to the double knockout.