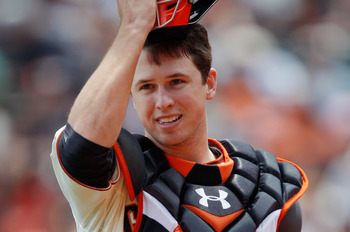 There has been some buzz around baseball for the last couple of days regarding the play that likely cost San Francisco Giants catcher Buster Posey the rest of his season.  After being barreled over by the Florida Marlins' Scott Cousins at home plate near the end of Wednesday night's game, the potential superstar fractured his leg and tore three ligaments in his ankle.

While many (including Cousins himself) believe the play was clean under current Major League Baseball rules, others are speculating as to whether those rules should in fact be changed.

The main arguments are for new provisions requiring the catcher to leave the plate open and/or requiring the runner to avoid contact with the catcher.  But the main detractors of these ideas are those who cite baseball's tradition, "the way the game has always been played."

Yes, baseball is centered largely on tradition, and it's one of the hundreds of things that makes this game so remarkable.  But all sports also go through some evolution, particularly in response to concerns about player safety.  (See: NFL concussions.)

So, while the following changes will likely not be made in the near future, let's explore some possible ways that baseball could make the game safer for its players.

Note: I do not actually promote any of these hypothetical rule changes.  I'm simply considering them as possibilities.  It seems to me that, if enough of a debate has started over home-plate collisions, there should at least be a conversation about other dangerous plays in baseball.

Ultimately, however, I think it's impractical to try to change rules like this, especially in such a reactionary manner.  There are simply too many plays in which a player can get injured to try to modify them all.  It is a noble objective, indeed, but an impossible one to fulfill. 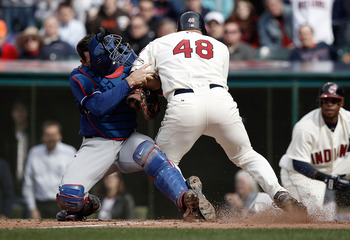 Let's start with the one sparking all the debate.  Changing the rules regarding home-plate collisions would essentially turn home plate into second or third base.

The idea does have some merit.  Just because the catcher is decked out in a helmet and some protective padding doesn't mean that he'll be unharmed by a 225-pound man charging full-speed trying to run him over—while his focus is on catching an incoming throw (most often) from an outfielder.

Then again, disallowing the catcher from blocking the plate does put a major disadvantage on the defense.  Throws home, given the distance and the angle (again, from outfielders) can be much more difficult to gauge, and often catchers do all they can just to handle them.  If they have to do all that and then find the potential scorer, who will likely be twisting and turning to avoid the tag at all costs, the chances of preventing the run will go down significantly.

Still, the history of catchers getting injured on this particular play—from Ray Fosse to Carlos Santana—suggests that this rule change would greatly benefit catchers' well-being.

No More Throws Inside the First Base Line 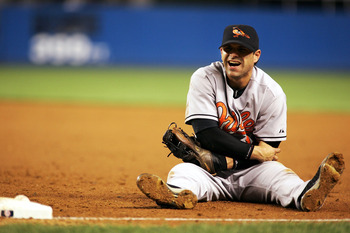 Any baseball fan has seen the play a million times before.

After a batter bunts or otherwise sends the baseball meagerly down the first base line, the catcher pounces out of his crouch, mask flying, and grabs the rolling ball.  With the batter flying to first, the catcher has to make a quick, accurate, throw.

Only, in this situation, the runner likely won't be sliding.

If the catcher doesn't find the right angle, his throw can easily be sent to the first baseman's left side—directly in front of the incoming runner.  This creates an incredibly dangerous position for the first baseman, who suddenly leaves his catching arm vulnerable to collision.

In 2005, Baltimore Orioles second baseman Brian Roberts (covering first base on a bunt attempt) found himself in this very spot.  With New York Yankees outfielder Bubba Crosby trying to run out the bunt attempt, Roberts caught the catcher's throw right when the runner reached the bag.  Body met arm, and Roberts was left with a dislocated left elbow, which cost him the rest of his season.

It would be very difficult to implement a rule to prevent this kind of incident.  Still, there could be a provision made that mandates that catchers have to throw to first base at an angle that would not interfere with the oncoming runner. 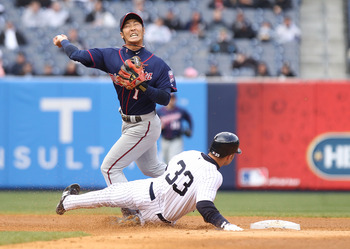 Barely a week into the 2011 season, new Minnesota Twins second baseman Tsuyoshi Nishioka broke his fibula while trying to complete a double play.

Against the New York Yankees on April 8, Nishioka took a throw from third baseman Danny Valencia to record the out at second, retiring Nick Swisher.  Swisher, attempting to break up the double play, slid hard into second base, going to the left of the baseline to collide with Nishioka.

The general consensus after the unfortunate incident was that the play was clean—once again, under MLB rules and etiquette.  But should it be considered that way?

The rule regarding these plays at second is that the runner must be within reach of the base when he slides out of the baseline (as Swisher was).  Perhaps that is too lenient a condition.  Plus, once the out is recorded and the oncoming runner is retired, what place does he have trying to break up the double play?

Conceivably, a rule could be implemented dictating that runners can only slide directly into the base, or at least within less than an arm's length. 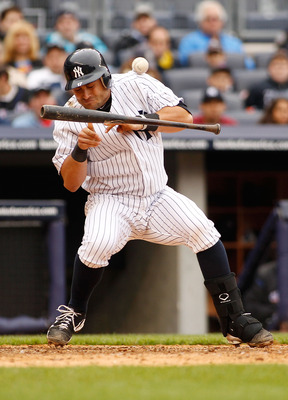 You could probably see this one coming.

As far as baseball etiquette goes, this is one of the more famous examples: "You hit our guy, we're going to hit one of yours."

Should there be a stop to this practice?

Yes, there is some value in protecting your players and having each other's backs.  But is it worth endangering another batter?

While most intentional beanballs are executed "the right way," aimed at the backside of the hitter, this may not always be the case.  In most situations in which the pitcher's intent is unclear, batters are left in more pain.

Of course, umpires try to monitor these sequences, giving warnings to teams when they deem them necessary.  But is this enough?  Should there be stricter consequences for pitches that seriously injure a player when intent is perceived?

No More Sliding into First Base 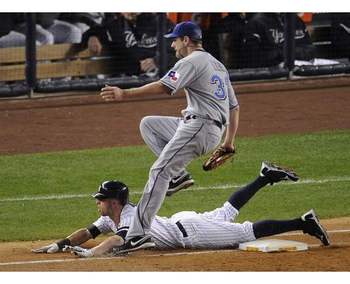 Granted, this is a relatively rare play, but it is important to mention nevertheless.

Sliding into first base usually occurs when the batter is in a footrace against the first baseman or pitcher covering the bag.  This leaves the hitter very vulnerable to injury, with several open body parts that could be trampled on.

Sliding head first, in general, is considered dangerous, and when it's at first base, the risk only increases.

(Not to mention the fact that many who have studied the play agree that it doesn't even help the runner get to the base any faster.)

While this strategy is likely employed instinctively on most occasions, this seems like an easy thing to ban if it was deemed appropriate.  Once batters know the option isn't there, they likely would (eventually) commit to running through the base on all occasions.

But would this (or any of the aforementioned rules) be valuable to the sport?  Are there other safety provisions that you think could help baseball?  Share your thoughts in the comments section below.