Scottie Pippen: Without MJ, Would He Have Been Considered an All-Time Great? 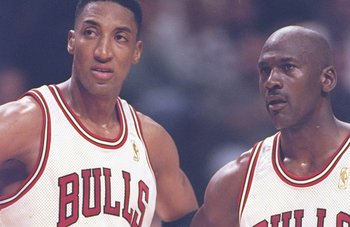 NBA fans and experts everywhere where puzzled by those words, since most believe that Pippen wouldn't have six championship rings if it wasn't for Jordan.

During his days with the Chicago Bulls, Pippen was considered by many as nothing more than Jordan's sidekick and a star that Jordan "made."

Several people feel that Pippen is vastly overrated and wouldn't have been anything special if he hadn't played alongside Jordan in Chicago.

Nonetheless, Pippen enjoyed a remarkable 17-year career on the hardwood with the Bulls, Houston Rockets and Portland Trail Blazers. The seven-time All-Star forward was named to the All-NBA First Team three times, the Second Team twice and the Third Team twice.

Pippen was mostly known for his lockdown defense. He earned a spot on the NBA All-Defensive First Team eight consecutive years form '92-'99 and was named to the Second Team twice.

He was inducted into the Basketball Hall of Fame in '10, which was his first year of eligibility.

If Pippen never played with Jordan, would he still have been a star or would he have been a flat-out bust or just an ordinary player?

This slideshow will take you on a realistic journey of Pippen's career if he and MJ didn't cross paths. 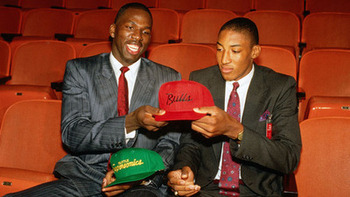 Pippen is selected by the Seattle SuperSonics with the the fifth overall pick in the '87 NBA draft.

But instead of being traded to the Bulls for No. 8 pick Olden Polynice, he sticks around in Seattle.

The Sonics also use the ninth overall pick on Horace Grant, who in "real life" helped Jordan, Pippen and the Bulls win three titles in the '90s. Meanwhile, Chicago drafts and keeps Polynice and then chooses Derrick McKey 10th overall.

As a rookie, Pippen serves as a spark plug off the Sonics' bench and helps the trio of Tom Chambers, Xavier McDaniel and Dale Ellis reach the postseason.

Following the season, Chambers signs a deal with the Phoenix Suns allowing Pippen to move into the starting lineup.

A Star Is Born in the Emerald City 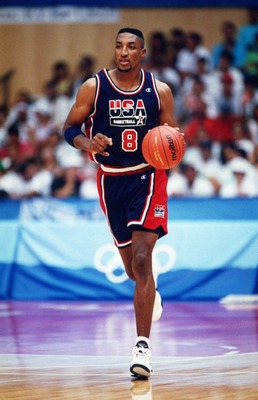 The Sonics trade McDaniel and Ellis within the next few years as the team opts to rebuild around Pippen, Grant, Shawn Kemp and '90 lottery pick Gary Payton.

Without Pippen, the Bulls somehow land the fourth overall pick in the '89 draft and select sharpshooter Glen Rice to become Jordan's "sidekick."

Pippen enjoys a spectacular '89-'90 campaign, averaging a little over 22 points per game and making the first of eight straight All-Star appearances.

The talented "point forward" eventually develops into one of the game's top all-around players. However, he is left off the '92 Olympic squad as Detroit's Isiah Thomas makes the cut instead.

Pippen, though, lands a spot on "Dream Team II" which wins a gold medal at the '94 FIBA World Championship.

Winning a Title as Batman Rather Than Robin 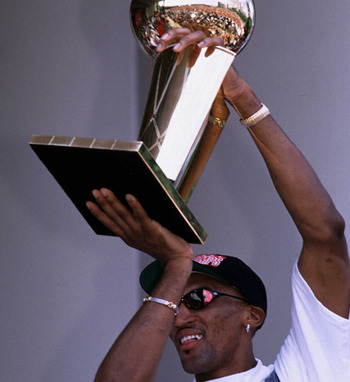 Meanwhile, Pippen, Payton and Kemp develop into one of the league's most dangerous duos. All three players are All-Stars, but Pippen is Seattle's clear alpha dog and comes close to winning a MVP during the '93-94 season.

The Sonics, now a true title contender, lose to Hakeem Olajuwon's Houston Rockets in the '94 Western Conference Finals before capturing a title in '95. Pippen is named Finals MVP.

Jordan comes out of retirement and returns to Chicago, where he's surrounded with a championship-caliber supporting cast. MJ's Bulls end up defeating Pippen's Sonics in six games in the '96 NBA Finals.

In the summer of '96, Pippen helps the U.S. win gold in the Olympics.

Pip Heads Out of Seattle 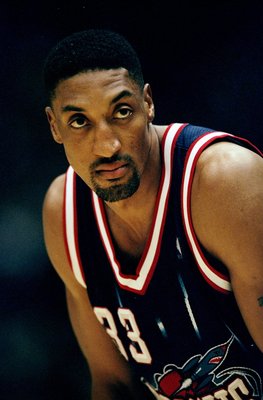 In '97, Pippen just misses out at being named one of league's 50 greatest players. Dominique Wilkins makes the list instead.

Pippen is traded to the Rockets in January '99 and spends one season playing alongside Olajuwon and Charles Barkley.

He is later dealt to Portland, where he stays for four seasons, and then finishes his career in '04 after a final season back with the Sonics. 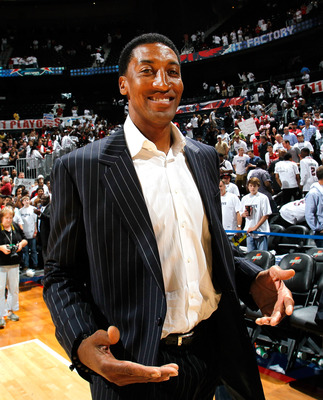 And without Pippen, Jordan wins just three titles instead of six.

So is Pippen still an all-time great without playing with the great Michael Jordan?