2011 NHL Playoffs: The 10 Most Memorable Playoff Moments in Sharks History 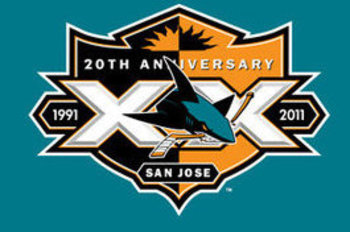 In the franchise’s brief existence, one can point to many things in Sharks history that make the Stanley Cup playoffs so great.

And as a Sharks fan, many indelible memories could make up this list of most memorable moments in playoff history.

Whether you agree with these selections is, of course, entirely up to your discretion considering the "personal preference" factor with this listing.

With the quiet lull before the proverbial Game 7 storm ahead, we take a look at the top 10 moments in Sharks franchise history.

Patrick Marleau dished the puck to Patrick Rissmiller on the nifty feed to enter the zone, and Rissmiller didn't miss his chance scoring the game-winner in double overtime.

Against the upstart Predators, the Sharks stole the home-ice advantage by splitting the first two games in Nashville.

Mike Grier had a big playoff game, with a goal and an assist in Game 1 for San Jose. The Predators were eliminated in just five games, and could not match the depth the Sharks boasted.

Unfortunately, the Sharks fell short against the Detroit Red Wings in the semifinals, where they blew a perfect chance to go up 3-1 on the Red Wings in Game 4.

Andrei Zyuzin scores the overtime winner against the hated Ed Belfour, who had left town the year before.

Logging just 18 games due to a suspect back injury, and fooling the fanbase into believing he would resign, Belfour wasn't exactly a fan favorite for the Sharks faithful.

The Zyuzin goal exacted a measure of revenge against Eddie "The Eagle", and for Sharks fans the world over for the scornful way in which Belfour departed.

Unfortunately "Crazy Eddie" would get the last laugh, as the Stars defeated the Sharks in six games.

Behind Mike Keane's performance for the Dallas Stars in Game 6, they eliminated the Sharks in overtime on San Jose ice.

Patrick Marleau slammed home the game-winner in overtime, following the odd-man rush up ice with Joe Thornton putting down the Red Wings in Game 3 at the Joe.

Just a year ago, the Sharks did the unthinkable by going into the Joe up 2-0 and winning in stunning overtime fashion to take a 3-0 lead. A feat they duplicated this year, from the date, location and even score against the very same Red Wing team that now threatens to finish their comeback in Game 7.

San Jose had some question marks heading into the semifinal matchup against its nemesis a year ago, having struggled at times to score against the Avalanche.

Following up his own shot, Roenick took the poorly angled rebound and put the Sharks ahead 3-2 for the lead in Game 7. His goal halfway through the second period was one for the ages, and one of the biggest goals in Sharks history.

A thrilling ending to a terrific series, the Sharks finished off the Flames at home in Game 7 in the 2008 quarterfinal round.

Trailing the Flames 2-1 in the second period, the Sharks rallied to chase Miikka Kiprusoff from his net, putting an end to Kipper’s stranglehold on the series. The Sharks rang up five goals and received a huge performance from Jeremy Roenick.

On a night where the stars needed to shine the most, Roenick came up big in the twilight of his career, scoring two goals and two assists in the victory.

Why this moment? Following a 2-0 shutout at the Saddledome where the Sharks were dominated, San Jose returned home and sealed the deal in classic fashion.

Also, who can forget Owen Nolan returning as a Flame, being credited for a goal that should have been disallowed?

Ray Whitney ended this classic battle in the Saddledome, sending the Flames packing in seven games.

Trevor Kidd led the Calgary Flames back from the 0-2 series deficit to not only tie, but take back the series lead following an embarrassing Game 5 drubbing.

The Flames had all the momentum after the 5-0 Game 5 victory, and facing elimination the Sharks stormed back to win the series.

Behind the stellar play of the "Ov" line and solid goaltending from Wade Flaherty, the Sharks came back against the high-flying Flames.

San Jose had a world of momentum against them after getting their butts handed to them in Game 5. Instead of packing it in, the Sharks rallied at home in Game 6 before hitting the road for the fateful Game 7 win in double overtime. And who can forget Kelly Kisio in a Flames jersey?

With 7:57 left in the second period, Jonathan Cheechoo scored the short-hander to put the Sharks up 3-0 against the Avalanche.

Joe Sakic, Peter Forsberg, Paul Kariya, Teemu Selanne and even Rob Blake led the Avalanche against the Sharks, but David Aebischer wasn’t up to the task.

After jumping out to a 3-0 series lead, the Sharks dropped two consecutive overtime games before closing out the Avalanche in six games.

In the aftermath of the Owen Nolan trade, and the team struggling in the early parts of the season, Ron Wilson guided San Jose within striking distance of the Stanley Cup Finals.

This moment marked the first time in franchise history the Sharks advanced to the Western Conference finals, only to fall short to the Calgary Flames. Also, the Ekman-McCauley-Korolyuk line performed for the Sharks all season long, and their postseason play helped San Jose through a tough transitional period.

Owen Nolan unleashed an innocent-looking slap shot at mid-ice, only to have Roman Turek misjudge the puck and have it go in. Silencing the St. Louis crowd and sending the Blues home with just a Presidents' Trophy to show for their efforts.

There simply wasn’t a team as dominant as the St. Louis Blues in 2000, where they led the league with 113 points but fell flat in the playoffs.

But the trio of Pierre Turgeon, Al MacInnis and Chris Pronger couldn’t deliver against the Sharks in the 3-1 deciding Game 7 at home.

St. Louis fought back valiantly to force a Game 7, and even chased Sharks goaltender Steve Shields in Game 6 but Roman Turek couldn’t seal the deal.

After stealing a win in Game 2, the Sharks won the next two at home, marking the first time all season the Blues had lost three straight.

The Sharks recorded their third first-round upset since entering the league, upsetting a Blues team that finished 27 points ahead of them in the standings. This moment was made especially memorable with all the weird bounces throughout the series that included Marc Bergevin putting the puck into his own net—one of the more memorable playoff matchups in recent memory.

Ian White’s shot deflected off a Kings player, and rolled just in front of Joe Pavelski, who wasted no time putting the puck past Jonathan Quick for the tying goal.

Too early, you say? It may be so, but for one night the San Jose Sharks did the impossible by storming back to win in overtime, and rally from a four-goal deficit.

Just three minutes into the contest, the Kings had already jumped out to a two-goal lead behind back-to-back goals just 14 seconds apart.

With a little fewer than 10 minutes left in the second period, the Sharks looked completely out of it and were unable to get any momentum into the Kings zone.

After dropping Game 2 at home in a forgettable and completely lacking effort, the Sharks stormed back in the second before tying it up in the last 30 seconds of the period.

In a season chock full of defining moments, this was one of the very best for the San Jose Sharks. Against an old division rival, on the road and down by four, very few people gave San Jose any shot. Also, Devin Setoguchi's winner in overtime was a small part of his redeeming season—one that began with trade winds blowing around the young winger at one point.

The Sharks joined the Minnesota North Stars (1985 vs. Chicago), the Kings (1982 vs. Edmonton) and Montreal (1971 vs. Boston) as the only teams to rally from a four-goal deficit to win a playoff game.

Jamie Baker collected the errant Chris Osgood clearing attempt, before depositing it into the Detroit net for the game-winner in Game 7.

The HP Pavilion was still called the San Jose Arena, decaf coffee was still the reason the Sharks existed, downtown San Jose was a mere shadow of what it is today and the Northern California love affair with the Sharks was just three years old.

A magical season for the ages saw the San Jose Sharks post a 33-35-16 record, a staggering 58-point improvement from their previous season.

Against the powerhouse Red Wings, the expansion San Jose club did the unthinkable against all the odds.

Led by the “Ov” line and the timely goaltending of Arturs “Like Wall” Irbe, the Sharks fought valiantly before dispatching Detroit 3-2 in Game 7 on the road.

Still one of the greatest lines in San Jose Sharks history, the trio had a chemistry and connection unrivaled in franchise lore.

With the Sharks franchise still in its infancy, and struggling to gain recognition in the NHL, San Jose completed one of the most staggering upsets in NHL history. The "Ov" line played particularly well when the stakes were at their highest. Sharks fans deserved more of this trio and Constantine ruined it. 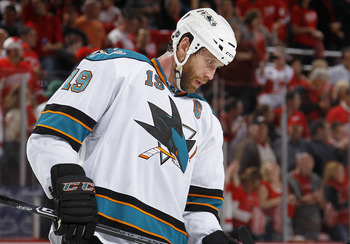 Yes, I'm quite aware this game hasn't happened yet.

I'm also quite aware the Sharks were dominated in Game 6, and showed nothing close to the urgency required to put away the Red Wings. Or that the Sharks blew their third lead in three tries to close out the Red Wings after taking a commanding 3-0 series lead.

And yet here it is, a game that hasn't even happened yet topping this list of wonderful moments in Sharks playoff history.

Make no mistake—Game 7 is the biggest game in the Doug Wilson era for the Sharks organization, regardless of the outcome.

Why, you may ask? The Sharks need their stars to show up and play desperate hockey to prevent becoming the fourth team since 1939 to blow a 3-0 series lead. There are no excuses for blowing a 3-0 series lead, no fathomable reason to fail in Game 7.

The stage has been set, the situation is inescapable and excuses irrelevant.

Win and it's yet another defining moment in a season full of such moments.

Lose, and it will undoubtedly cause a ripple effect through the organization, where no player, coach or front office staffer is safe, and rightfully so.

Either way, the Sharks and their fans will know what the team is made of come Thursday night.