Oakland Raiders Secondary Will Be the Top Ranked Unit in 2011 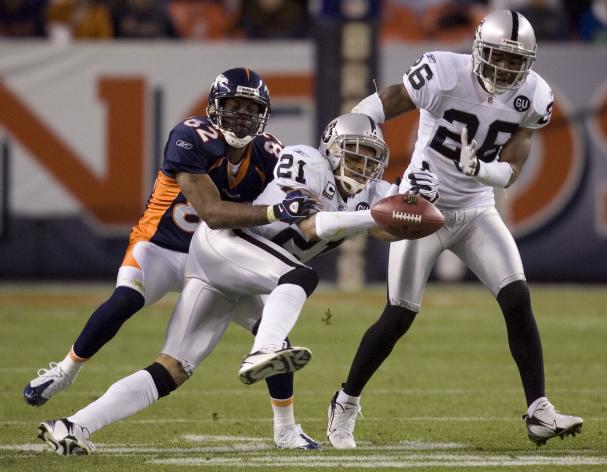 The Oakland Raiders were the No. 2 ranked pass defense in the NFL in 2011 with two corners tied for third in burn percentage. Add to that the fact that former first round safety Michael Huff showed signs of getting it.

But now, Raider Nation is in a state of panic because All Pro corner Nnamdi Asomugha and Huff are free agents. But there is no need to worry because they will have the top ranked secondary in the NFL regardless.

Turn the page to see why there is little to worry about. 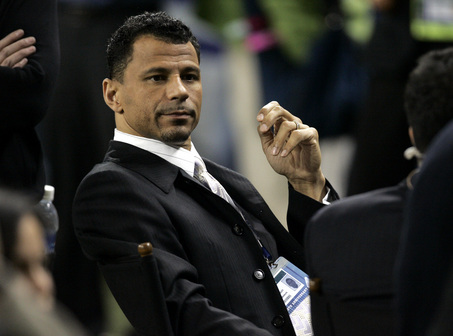 Rod Woodson is a huge addition for the Oakland Raiders going into 2011. Asomugha gives Woodson a lot of the credit his development as they were teammates early in his career.

Woodson also seems to be the one that is getting through to Raider owner Al Davis. In interviews after being hired, Woodson spoke of his plans to "mix things up" instead of constant man coverage.

But the Raiders will always be first and foremost a man coverage team and Woodson is a great teacher of it. Therefore, no matter who is in the Raiders secondary, the coverage should be executed well. 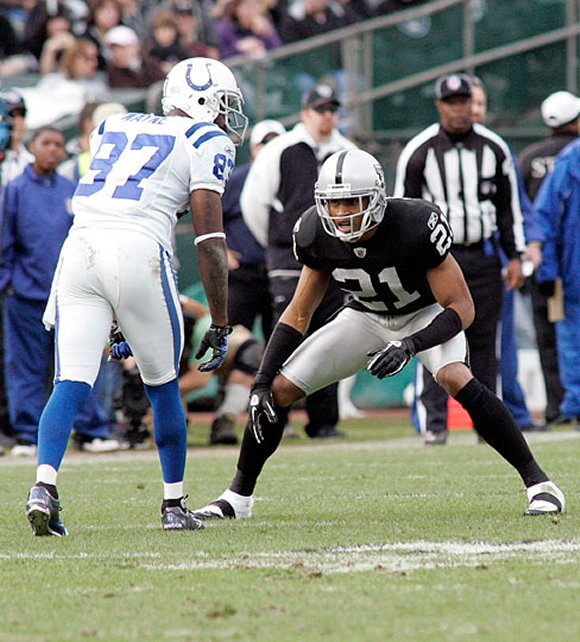 I am predicting that Asomugha will be back.

The media has tried their best to lock the door on him but Davis is the one with the key.

Davis has always believed that you need two great corners to have a great, Super Bowl winning defense. The corners that he's had on two of his three  Super Bowl teams backs it up. (1976 Willie Brown Skip Thomas 1983 Lester Hayes Mike Haynes)

One of the best things about the Raiders in 2010 was the No. 2 ranked pass defense. You don't fix what's not broken and losing All-Pro players isn't the way to improve a .500 team the next year so expect Davis to do what it takes to keep Asomugha.

Davis is still kicking himself over losing Charles Woodson. Losing Asomugha would be even worse because he has no injuries to question if he is in his prime.

Asomugha and Woodson are close and Woodson came to Raider Nation to coach Asomugha. Asomugha can also look forward to Woodson mixing up coverages, which is another thing Asomugha wanted. 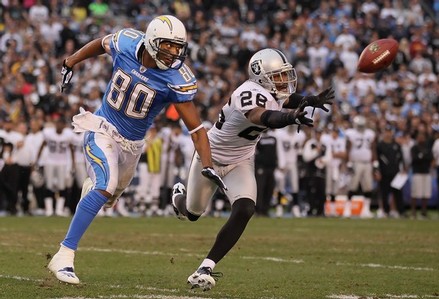 Stanford Routt just signed a huge contract before the C.B.A was reached so he is in place as at least the Raiders No. 2 corner. Routt proved himself worthy of playing opposite Asomugha in 2010 to get that big contract.

Many in the media believe that his breakout year led Davis to be willing to let Asomugha go to keep him. His burn percentage was the same as Asomugha's in 2010 but he gave up five TDs to Asomugha's zero.

Should Routt build off of 2010, he will fill the void left by Asomugha or be a part of the best corner tandem in the modern era of the league. 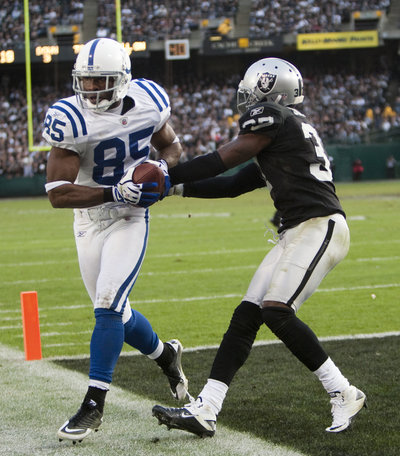 Chris Johnson is the wild card in this Raider secondary that they can do many things with. They can cut him and save six million to help sign Huff and Asomugha.

They can re-sign him for less to have an awesome third corner on the roster. Or they keep him where he is if Asomugha signs elsewhere to play opposite the emerging Routt.

Johnson was No. 6 in burn percentage among corners so the Raiders are guaranteed to have two top corners from 2010 going into 2011.

This makes Johnson one heck of a wild card. 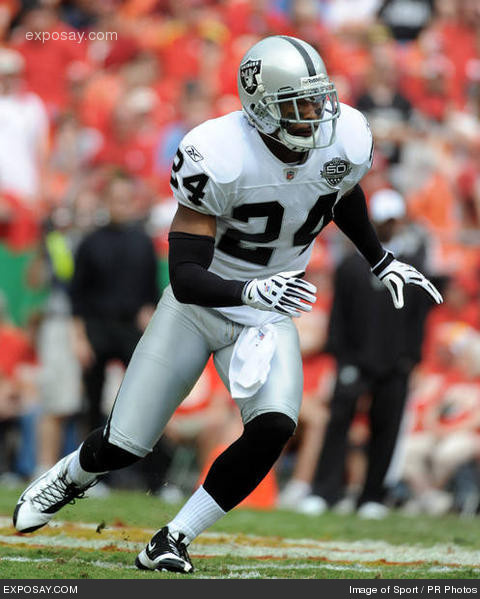 Michael Huff is another Raider that the media believes is out the door. But word out of Raider nation is that the Raiders wanted to resign him as well as Asomugha before the C.B.A. but couldn't because of the 30 percent rule.

When a player gets a 30 percent pay increase, the team cannot re-sign him before he hits the free agent market. Another good things is that Huff has expressed desire to be remain a Raider.

In an interview after the season finale, he said, "Don't worry Raider fans. I'm not going anywhere." . 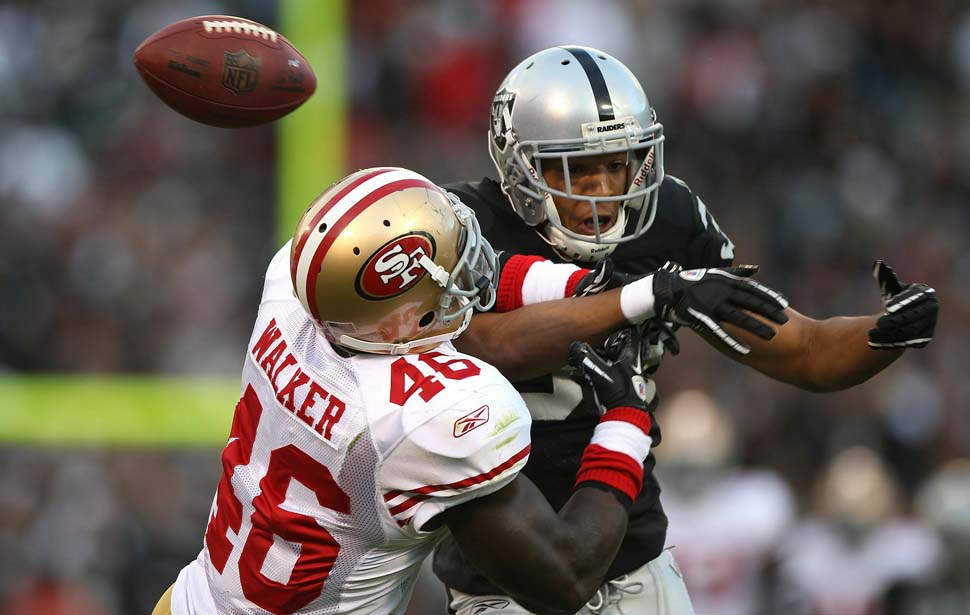 Tyvon Branch is still under contract so the Raiders will have him for the 2011 season. He had an outstanding 2009 season but had an off year in 2010 struggling in coverage.

What will he do in 2011 under the tutelage of Woodson?

I'm expecting his coverage to be up to par. 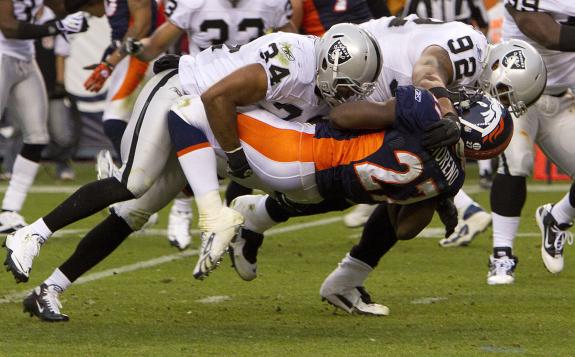 The Raiders drafted Mike Mitchell in the second round of the 2009 draft because he can hit! But the reason why he's had trouble getting on the field so far in his career is because he struggled in coverage.

But in 2010, Mitchell looked pretty good in coverage while Branch struggled in coverage in 2010. So there just might be a heated competition at strong safety in 2011.

Or he can sit back at free safety and rattle receivers skeletons if Michael Huff decides to leave Raider Nation. He also has the size to move into the box to play strong safety so Branch can move to free safety.

This wild card  needs to see the field because the Raiders need hitters. 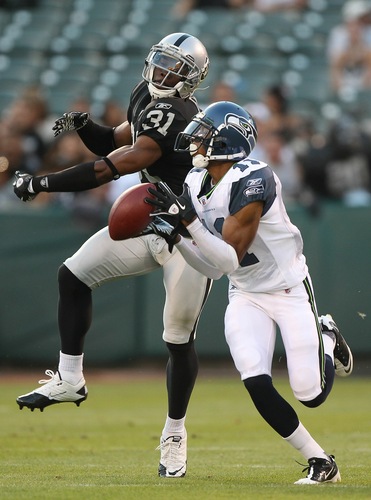 Hiram Eugene just signed a contract to get payed $2 million a year just in case. When Huff struggled early in his career with missed tackles, Eugene replaced him and missed tackles.

He will be the Raiders' worse case scenario starting free safety. 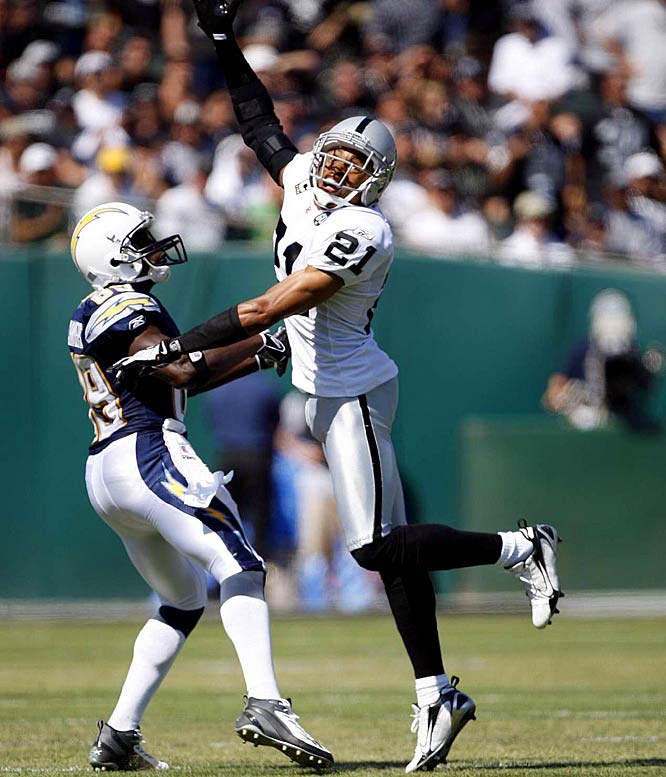 I'm still thinking that Asomugha Huff will be a Raiders for the 2011 season.

But if they aren't, the Raiders still have the No. 3 and No. 6 ranked corners in the league in terms of burn percentage. Branch and Mitchell could also very well replace Huff at free safety and do well.

The Raiders also have youngsters like Walter McFadden, Jeremy Ware, and Stevie Brown in the mix. So either way, the Raiders will not be that worried about their secondary in 2011.

In fact, they will have the best secondary in the NFL regardless of what Asomugha and Huff do.

But I think they are staying.

Let's not forget, the Raider secondary will be taught by the arguably the best defensive back in NFL history.