Chicago White Sox: 5 Things the Sox Need to Get from Spring Training 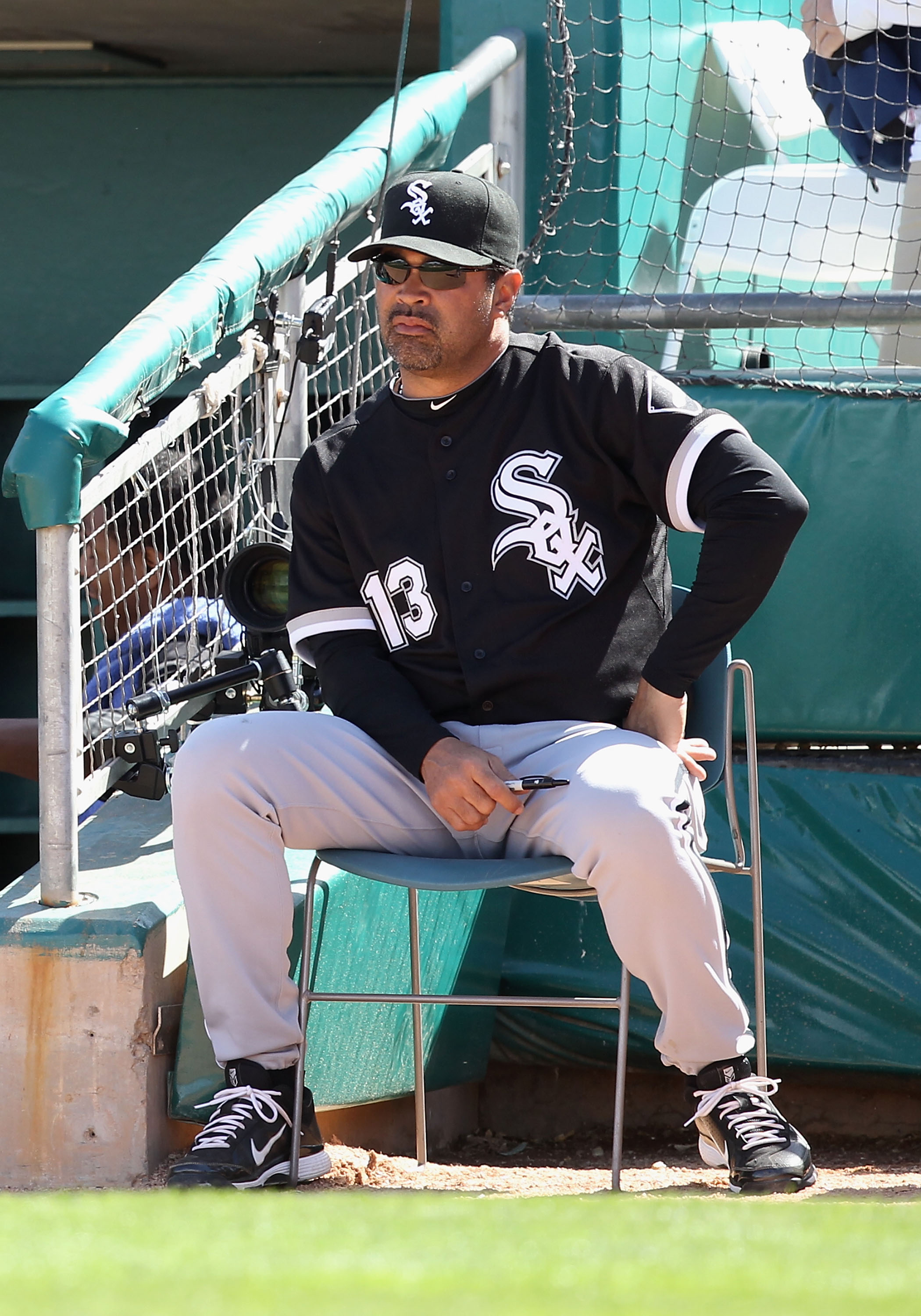 Coming off an up-and-down 2010 campaign, the Chicago White Sox are reloaded, "all in" and taking aim at the American League Central title and beyond.

The signing of Adam Dunn put a powerful left-handed bat in the lineup that the Sox so desperately missed last year, and the re-signings of Paul Konerko and A.J. Pierzynski told fans that this team means business.

Still, there are several questions looming over the fields at Camelback Ranch in Glendale. Here's a look at what the White Sox need to accomplish before April.

An Answer at Third Base 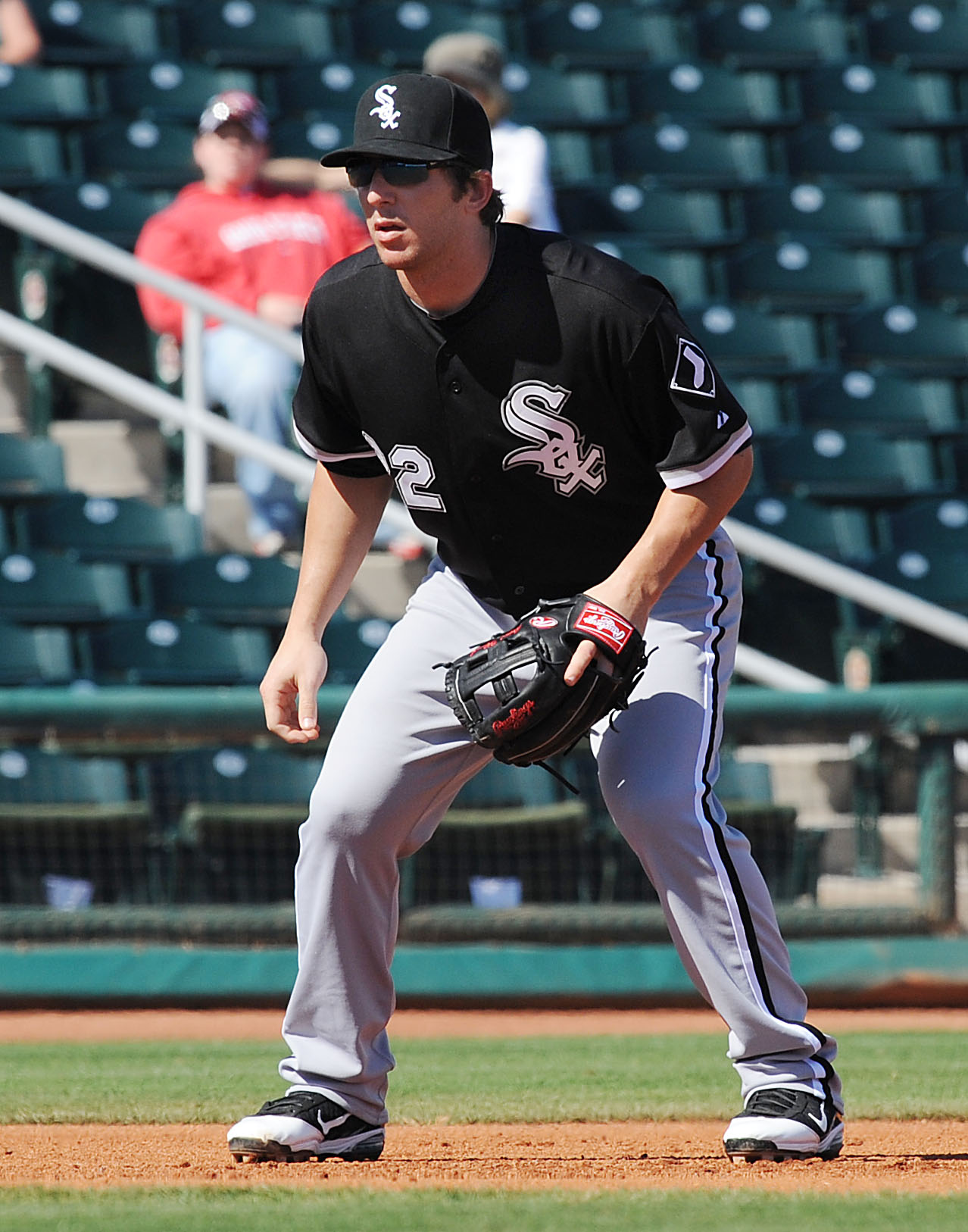 The Brent Morel vs. Mark Teahen competition is turning out to be rather interesting, but when it's broken down, it's very one-sided.

Now the twist. Offense doesn't matter at third base. Not on the White Sox. Look at the repertoire of the starting pitchers. A TON of balls are going to be hit to the left side of the infield when John Danks and Mark Buehrle are on the mound. They need someone with gold glove capabilities, and Brent Morel is that guy.

Morel has committed no blunders in the field this spring, whereas Mark Teahen had five throwing errors in his first five Cactus League games. He's calmed down a bit, but it's pretty evident that the decision has already been made, though manager Ozzie Guillen has said this will be one of the last decisions of the spring that he makes.

Look for Morel to be handling the hot corner on April 1 with Teahen spending time at first base, DH, maybe in the outfield from time to time and an occasional start at third. His bat may come in handy late in games as well.

The big problem this causes is that it takes up an extra roster spot. If Teahen were to win the job, Morel would start the year in the minors so he could get at-bats and reps at third on a regular basis. Morel winning the job is bad news for someone like Brent Lillibridge or Alejandro De Aza because Teahen isn't going to be sent to AAA, and he's not going to be traded. 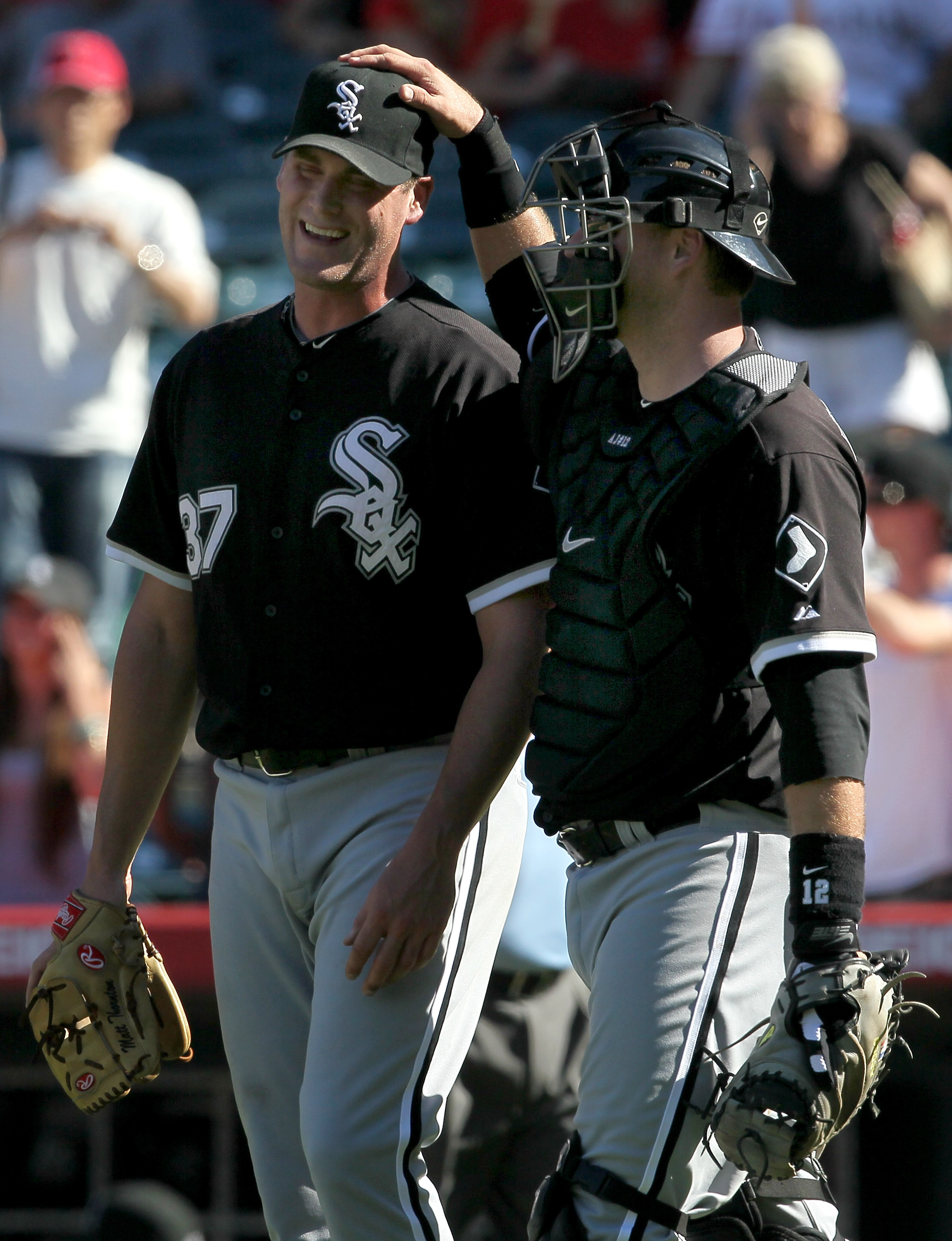 This competition is quite different from the third base situation. A plethora of plus-arms include Matt Thornton, Chris Sale, Sergio Santos, Will Ohman and Jesse Crain.

All of the names above have the stuff to be a closer, and all of them have shaken the catcher's hand after recording the game's last out (Santos once, Crain and Ohman thrice if you're fact-checking). It's a fantastic problem for Ozzie to have.

Throughout the spring, Guillen has talked about closing each inning and using his best guy when he deems it necessary, regardless of what inning it is. He says that, but he knows that most of the guys in his bullpen want a defined role and want to know when they'll be pitching.

Closer-by-committee rumors can swirl all they want, but Guillen, pitching coach Don Cooper, general manager Kenny Williams and any of the relievers all know that bullpens work better with defined roles, so flush those rumors down the toilet.

None of the candidates have really stood out this spring, except maybe Santos, but he really isn't in the running for the closer job in just his second year in the bigs. He has control issues to work on and will probably be seen in the sixth and seventh innings a lot this season.

Sale, technically a rookie this year, is up there with Thornton as the favorite to win the role. Like Santos, the lack of experience will probably work against Sale, as will the fact that Cooper plans to transform him into a starter down the road. Putting that kind of pressure on him is unnecessary at this point.

Many think that Thornton's two-year, $12 million extension signed earlier this month was an unofficial crowning, but it wasn't. Guillen really intends on dragging this decision out, maybe even longer than the one at third base.

Still, expect Thornton to be the guy when it's all said and done. And if he falters, there will be plenty of backup to pick up the slack.

A Plan with Jake Peavy

Waiting in suspense, were you? You can't say "2011 White Sox" without muttering Peavy's name in the same breath. His health is crucial to the team's success, and though you might be sick of the stories and coverage this spring, at least it's worth keeping tabs on...coughcoughAlbertPujolscontracttalkscoughcough.

Through three starts, Peavy hasn't been spectacular, but he's been very, very good. He rehabbed his butt off and he got into shape way ahead of schedule. He's done everything that has been asked of him since camp started, and he's even kept pace with his fellow starters.

Peavy has talked with his old coaching staff from San Diego (not undermining Coop at all) and is getting back to the pitching-style he used with the Padres.

Peavy is a competitor and wants the ball. If he's healthy, he will not be content with the No. 5 spot in the rotation, being skipped from time to time. He wants to be on the mound and help his team win games.

If the Sox decide to err on the side of caution, who will make those first few starts as the fifth man in the rotation? It's not going to be Tony Pena, but it might be Phil Humber. He's had a decent showing this spring and wouldn't be a terrible Plan B. 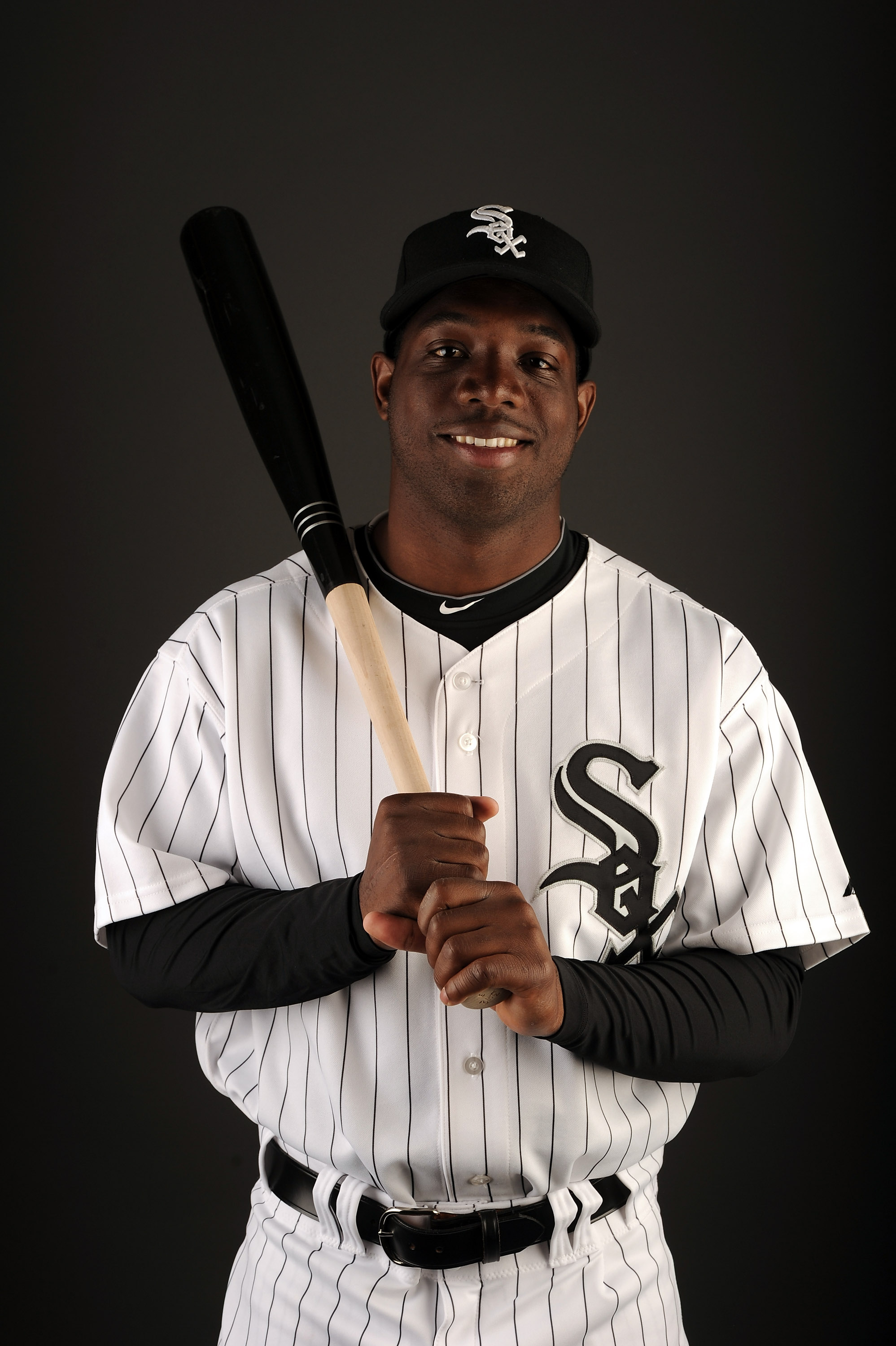 The White Sox are loaded with young talent that isn't quite ready to be in the Majors or doesn't quite fit with trying to do this year.

There's no convincing Sox fans that Carlos Quentin really is a different guy this year (HE IS! I SWEAR!) or that Juan Pierre can really be counted on to produce from the top spot (he works harder than anyone on the team, I SWEAR!), so the backup outfielder is a very important role on the 2011 team.

Stefan Gartrell (remember the name, he's going to be a STUD) was just optioned to AAA Charlotte, but had a very nice spring (.313 average, two HR). Jordan Danks has shown improvement (.350 avg, 7-for-20), and Dayan Viciedo was having the best showing of anyone on the team before fracturing his thumb (.435 avg, 10-for-23).

Viciedo is the one who is ready for the gig, but it's better to get him four at-bats per game in the minors than to let him waste away on the bench in the Bigs. Plus, he can't be the team's lone backup outfielder because he just made the move from third base. He's just getting comfortable in right field, so left field is questionable and center is completely out of the question.

That brings it down to Alejandro De Aza and Lastings Milledge. With the abilities to play any outfield spot and pinch run or pinch hit in late-game situations, both are valuable assets to the team.

Milledge has ripped two home runs in Cactus League play and has just shown a little extra spark, whereas De Aza hasn't done much to set himself apart.

Granted, Milledge also has made it a ritual of taking his helmet off before reaching home plate both times he went deep, so his showboating and questionable attitude may have followed him from New York, Washington and Pittsburgh. But until those quirks in his personality become actual problems, he appears to be the frontrunner. He's as polished as he's going to be, whereas De Aza can still develop in the minor league system.

Again, it goes back to getting to play every day as opposed to spending much of your time on the bench, something Milledge is already accustomed to (not a cheap shot, just stating fact). Barring a meltdown or injury, Milledge will be on the Opening Day roster. 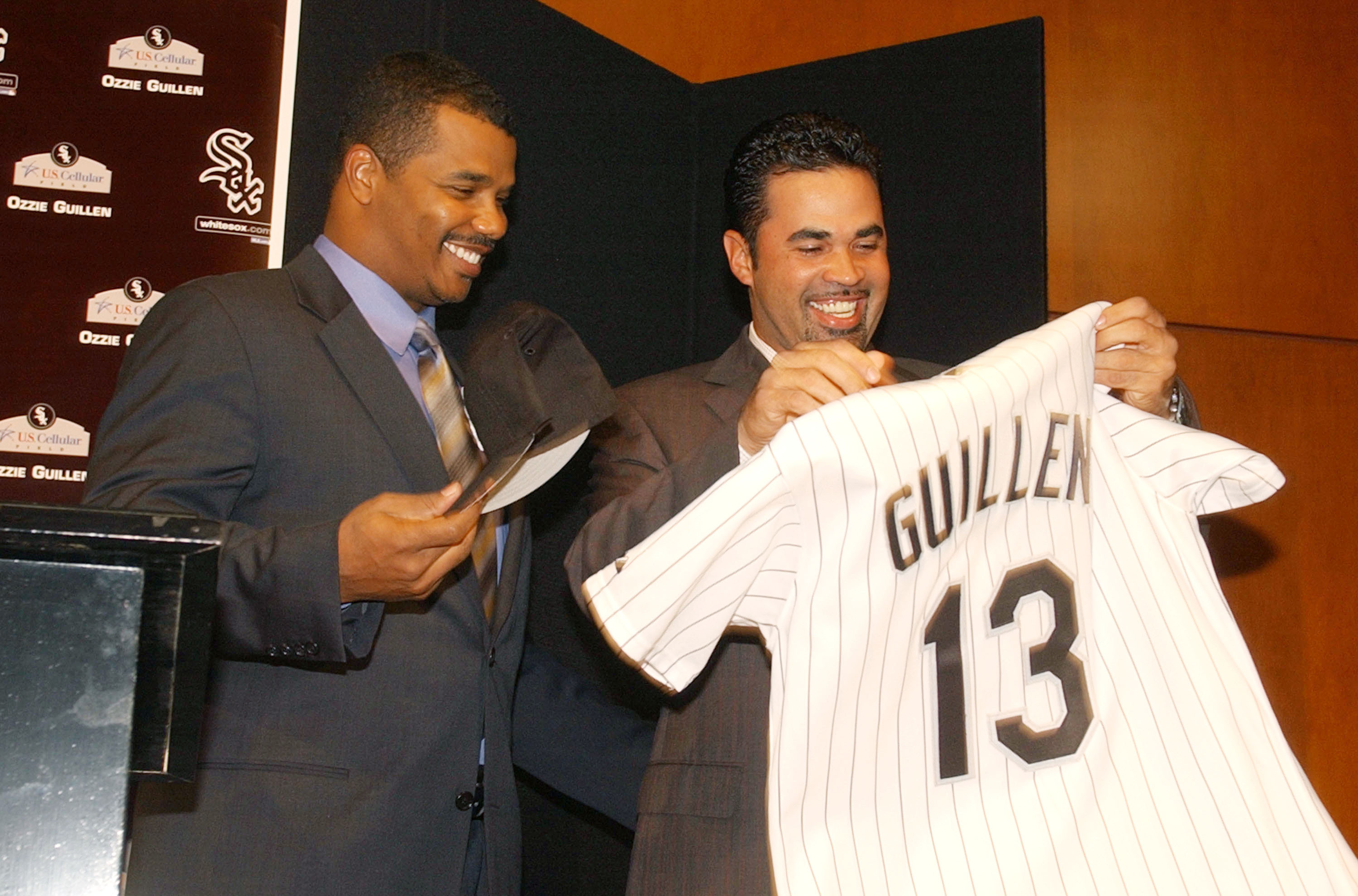 Despite the picture of Ozzie and Kenny, this is actually about the team, not the front office.

For a group that won 88 games last year, you wouldn't think they got off to a 24-33 start, but they did. It took a 25-5 run before the All-Star break to get back to where they wanted to be. They stumbled again in September (and the Twins flourished), which led to missing the playoffs by six games.

The White Sox traditionally get off to a slow start, but Ozzie Guillen seems hell-bent on changing that this season, because six games in April could end up meaning the season, especially in what should be a very tight A.L. Central race.

Guillen has said he'll do things different in spring training this year to try combating the slow start, but those things have yet to come to fruition.

Speaking about it the other day, Ozzie finally shed some light onto his train of thought. For the last week or week and a half of Cactus League play, he intends on using his anticipated regular season roster, minus Morel/Teahen, who will still be battling for the starting gig for almost the entirety of the games.

He said seven-plus innings for each position player, swapping Paulie and Dunn in between first base and DH, basically getting the team used to playing with one another as if it were the regular season.

Who knows if this tactic will actually work, but one thing is certain. If the loaded lineup, stacked bullpen or stellar starting rotation live up to expectations, Ozzie will look like a genius.